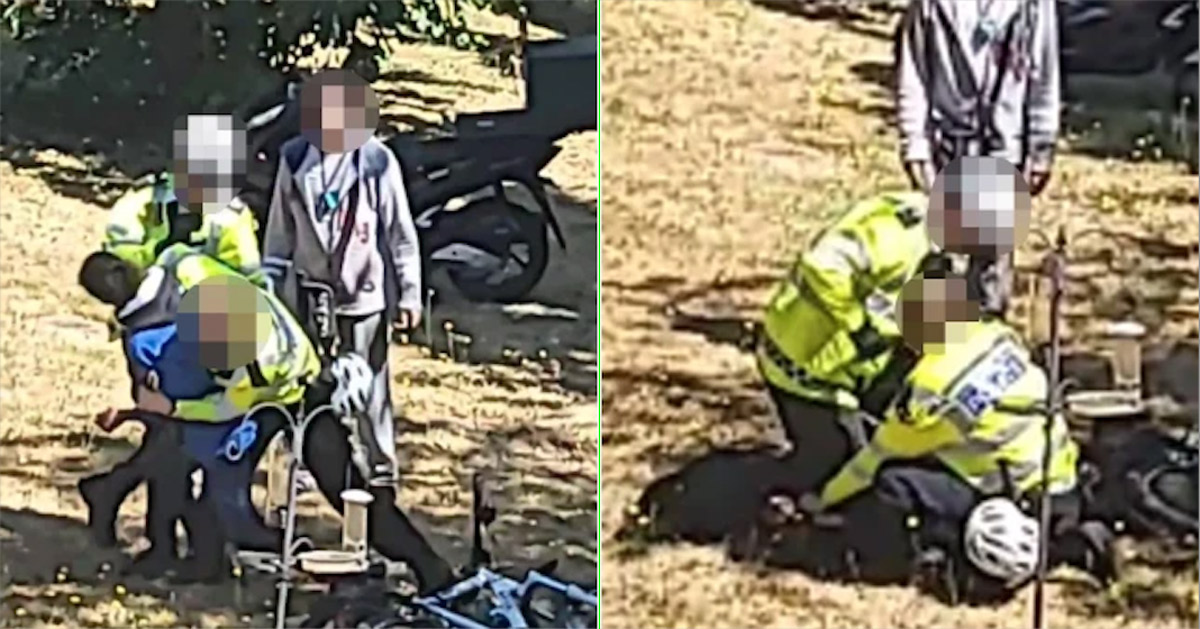 A Metropolitan police officer was filmed repeatedly punching a young black man in South-East London. Footage shared with Metro by a neighbour shows the officer leaning on top of the man, forcefully striking him again and again while a second constable holds the victim down.

Rachelle Henry—the neighbour who filmed the disturbing incident—was working from home on Friday 15 July 2022. As she was getting out of the shower, she heard shouting outside her home near Beacon Lane, Lewisham.

Looking out of her window, Henry saw one of the officers “putting his knee either on the man’s neck or head.” That’s when she grabbed her mobile and started filming as the second officer punched the detainee “five times either in the torso or the head.”

Horrified, Henry yelled, “What are you doing? Why are you punching him? I can see what you are doing” before warning the two officers, “I am recording you.” The 24-year-old then rushed downstairs, wearing nothing but her dressing gown, to confront the police about what she stated was a “racially motivated” attack.

“I had my phone in my hand and I was recording everything that was going on,” she told Metro. “As soon as I came downstairs, I saw the officer looking guilty. He told me I should go back inside and that I shouldn’t be down here.”

After being told to “shush numerous times” and being threatened with arrest “on obstruction grounds,” Henry eventually saw the young man pass out on the floor while the officers handcuffed him. “He was in and out of consciousness,” she said.

More units were called to the scene as well as an ambulance, which was later cancelled as it was going to take too long to arrive. The Met said the two officers were initially responding to a report about a bike being stolen.

They stopped the young black man and his friend—who is white—as they deemed them potential suspects. But Henry claimed the two were not treated the same and officers “abused their power” when they went after the black man and not his friend.

“Both officers were on top of the black man, while the white man was standing on the side not knowing what to do,” she explained. “He [the friend] kept shouting ‘please get off him, it’s his bike, the key is in his pocket’.”

As it turned out, it was indeed the man’s bike. Regardless of the obvious gross brutality being caught on camera, along with footage from body-worn video cameras, according to the Met’s Directorate of Professional Standards, “no misconduct was identified.”

“The public have said they will not rest until this is addressed. I even have people telling me they want to protest outside of Lewisham police station,” Henry told the publication. “My neighbours are really taking this seriously, although the Met are not.”

She has since launched a Change.org petition calling for “justice for the young man.” Meanwhile, Labour MP for Lewisham Deptford, Vicky Foxcroft, said she is “very concerned” by the video that has now been going viral on social media. The politician confirmed she has raised an urgent inquiry with the Borough Commander of Lewisham Metropolitan Police Service.

Other residents are also threatening to stage a rally outside the local police station and later Scotland Yard to raise awareness. The Met’s response? “Officers were responding to information from the public about a bike being stolen and the two men were potential suspects. One of the men appeared unwell and an ambulance was called by officers as a precaution. Due to the expected wait time the ambulance was later cancelled. The man appeared well when officers left the scene. Neither of the men who were stopped were arrested.”

As more and more instances of gross misconduct by the police continue to appear online—with the two latest ones being Australian officers dismissing domestic violence victims by saying they were “too ugly to be raped” and the Police Service of Northern Ireland (PSNI) manipulating a suicide victim’s body, photographing them and later sharing the images and videos online—the story we saw unfold in the video shared with Metro is yet further proof that the so-called ‘badge of trust’ officers wear counts for next to nothing.