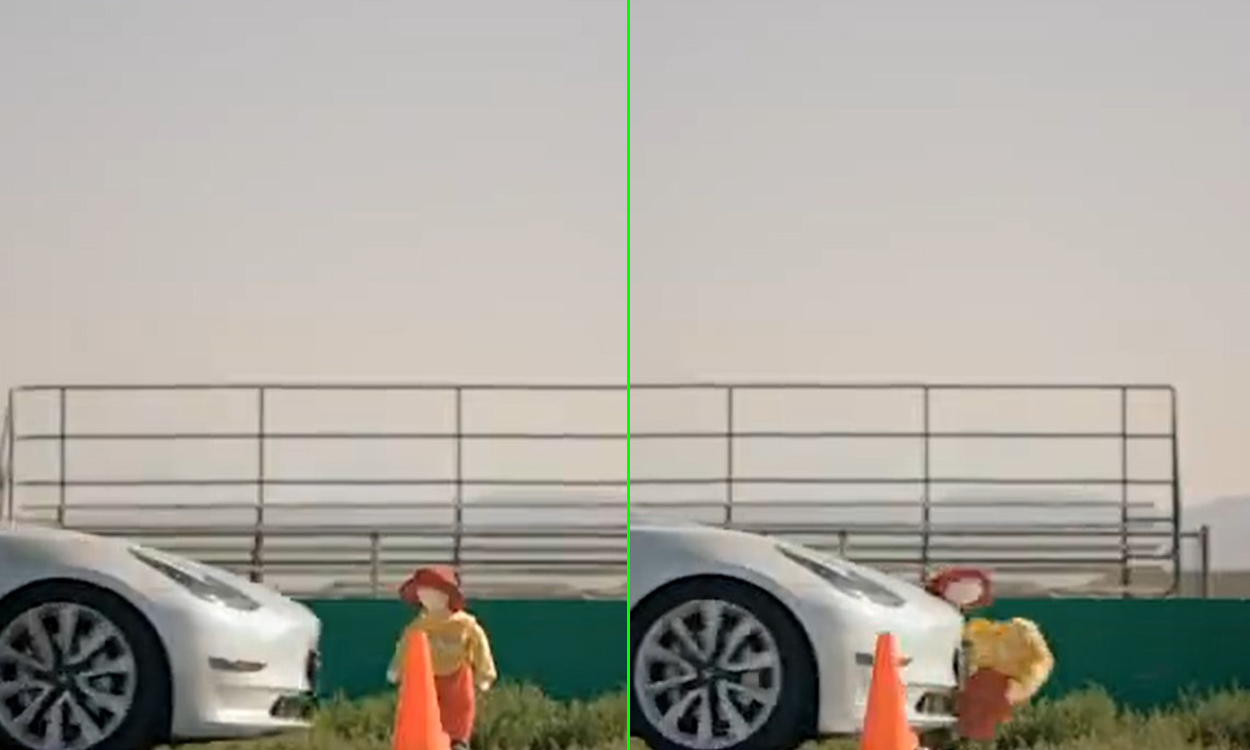 If you’re someone who keeps up with Elon Musk’s unchecked Twitter obsession, you might’ve noticed how Tesla fanboys have evolved into a full-blown subculture over time—initiating toxic slews of attacks against others who don’t fancy themselves on the “bleeding edge of innovation” or make the same “planet-friendly” choice as they did. Heck, they’d even go to ridiculous lengths just to prove their point.

Such is the case with Twitter user Taylor Ogan, who first uploaded a video of a Tesla Model Y and a Lexus RX performing a side-by-side test to see if their autopilot systems would detect a defenceless, child-sized mannequin on the road and slam its brake early enough to avoid running it over.

As claimed by the results of the video, the Tesla flunked the test by bulldozing into the fake child and yeeting its body like a bowling pin before coming to a complete stop. “It’s 2022, and Teslas still aren’t stopping for children,” Ogan captioned the resultant post, mentioning how the Lexus RX that stopped for the dummy is equipped with LiDAR—a technology Tesla Motors CEO Musk still refuses to use for self-driving.

“LiDAR is the same technology used in autonomous vehicles, which Tesla incidentally does not have,” Ogan went on to explain.

The Guardian also reported on a recent safety test conducted by the Dawn Project, where the latest version of Tesla Full Self-Driving (FSD) Beta software repeatedly ran over a stationary, child-sized mannequin in its path. The claims issued by the advocacy group form part of an ad campaign urging the public to pressure Congress to ban Tesla’s autopilot technology.

“Elon Musk says Tesla’s FSD software is ‘amazing’. It’s not. It’s a lethal threat to all Americans,” founder of the Dawn Project, Dan O’Dowd, told the publication. “Over 100,000 Tesla drivers are already using the car’s FSD mode on public roads, putting children at great risk in communities across the country.”

While footage from both tests has left the public disturbed, The Guardian noted how Tesla has earned a reputation for hitting back at claims that its autopilot is too “underdeveloped” to guarantee the safety of either the car’s occupants or pedestrians on the road. “After a fiery crash in Texas in 2021 that killed two, Musk tweeted that the autopilot feature, a less sophisticated version of FSD, was not switched on at the moment of collision,” the publication highlighted.

Now, it seems that Tesla fanboys—or ‘Tessies’ as some netizens call them—are hell-bent on defending their favourite auto maker’s honour. Taking to Twitter, most of them argue that, as the “children” involved were not made of flesh and blood but rather of cardboard and stuffing, the test did not prove if a Tesla would stop in front of an actual human child.

“Such a pointless test. Watch FSD beta. It registers every person in the vicinity and if anything, is overly cautious,” a user commented. “It has never hit anybody despite 40 million miles driven. 40 million. This is a fake, useless, non ‘real world’ test.”

“This is staged. You’ve never said one positive thing about Tesla, ever and invest in LiDAR,” a second wrote, while a third wildly admitted: “If I’m pressing the accelerator, the car should do what I tell it to do no matter what. It shouldn’t matter if there’s 100 children in front of the car, it shouldn’t override the driver’s manual input under any circumstances. So, BS test.”

The Dawn Project’s Twitter post also sported similar criticism, with one netizen stating, “Do you really think that the Americans are so stupid to believe in this staged video? I bet the driver was pressing on the accelerator pedal and the operator deliberately didn’t film the bottom of the Tesla screen so the viewers wouldn’t see a warning about it.”

According to most enthusiasts, the driver seated behind the wheel in Dawn Project’s safety test does not actually engage FSD as the sidelines on the screen were still grey in colour when recorded on camera. “When FSD is engaged, the lines turn blue,” a user explained. On 11 August 2022, The Guardian also updated the headline of their article to indicate that the Dawn Project’s test results were “claimed by the group, and have not been independently verified.”

Nevertheless, as soon as someone commented “but that’s a fake child. I bet it would work if it was a real child,” Tesla fanboys got to work, with one Twitter user risking it all to prove that the world’s leading electric car would stop for an actual child.

“Is there anyone in the Bay Area with a child who can run in front of my car on Full Self-Driving Beta to make a point? I promise I won’t run them over… (will disengage if needed),” @WholeMarsBlog tweeted, adding that it was a “serious request.”

“This is completely safe as there will be a human in the car,” the user continued, later updating their followers with: “Okay someone volunteered… They just have to convince their wife.” I wish this was a joke. But the enthusiast then detailed a list of instructions that will be followed during the test, including the fact that the child’s father would be seated behind the wheel.

Given the fact that the autopilot claims are yet to be verified and could well be another “smear campaign” against Tesla, as labelled by enthusiasts, it’s justified to note how the insights put forth by the advocacy group are not 100 per cent believable at this point. That being said, using living and breathing children as test subjects to prove a point is never a good idea.

As Andrew J. Hawkins penned in his open letter published by The Verge, “A lot of kids die in car crashes every year, but the numbers are going down. Let’s keep it that way.” 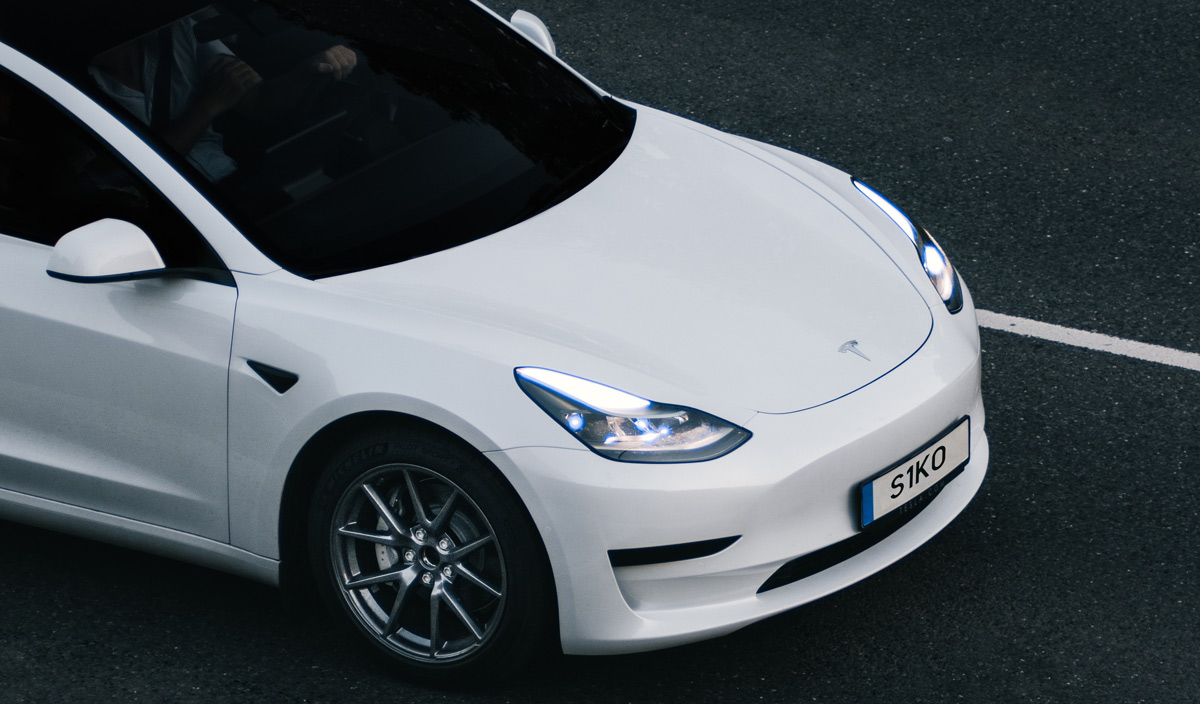 A month ago, towards the end of August 2021, the National Highway Transportation Safety Administration (NHTSA) launched an investigation into Tesla’s Autopilot system after it was found responsible for 11 accidents, resulting in 17 injuries and one death. Now a new study, conducted by the Massachusetts Institute of Technology (MIT), has confirmed how unsafe Elon Musk’s infamous autopilot feature actually is.

Titled A model for naturalistic glance behavior around Tesla Autopilot disengagements, the study backs up the idea that the electric vehicle company’s “Full-Self Driving” (FSD) system is in fact—surprise, surprise—not as safe as it claims. After following Tesla Model S and X owners during their daily routine for periods of a year or more throughout the greater Boston area, MIT researchers found that, more often than not, they become inattentive when using partially automated driving systems. Note here that I went from calling the autopilot a Full-Driving system—which is the term Tesla uses to describe it and therefore entails it is fully autonomous—to then qualifying it of an automated driving system, also known as an advanced driver assist system (ADAS), which is what it truly is.

“Visual behavior patterns change before and after [Autopilot] disengagement,” the study reads. “Before disengagement, drivers looked less on road and focused more on non-driving related areas compared to after the transition to manual driving. The higher proportion of off-road glances before disengagement to manual driving were not compensated by longer glances ahead.” To be completely fair, it does make sense that drivers would feel less inclined to be attentive when they think their car’s autopilot is fully in control. Only thing is, it isn’t.

Meanwhile, by the end of this week, Tesla will roll out the newest version of its autopilot beta software, the version 10.0.1 in this case, on public roads—completely ignoring the current federal investigation when it comes to the safety of its system. Billionaire tings, go figure.

Musk has also clarified that not everyone who has paid for the FSD software will be able to access the beta version, which promises more automated driving functions. First things first, Tesla will use telemetry data to capture personal driving metrics over a 7-day period in order to ensure drivers are still remaining attentive enough. “The data might also be used to implement a new safety rating page that tracks the owner’s vehicle, which is linked to their insurance,” added TechCrunch.

In other words, Musk is aware of the risk the current autopilot system represents, and he’s working hard on improving it, or at least making sure he’s not going to be the one to blame if more Tesla-related accidents happen. How do you say your autopilot is not an autopilot without clearly saying it—and therefore risking to hurt your brand? You release a newer version of it that can easily blame drivers for their carelessness, duh.

“The researchers found this type of behavior may be the result of misunderstanding what the [autopilot] feature can do and what its limitations are, which is reinforced when it performs well. Drivers whose tasks are automated for them may naturally become bored after attempting to sustain visual and physical alertness, which researchers say only creates further inattentiveness,” continued TechCrunch.

My opinion on Musk and Tesla aside, the point of the MIT study is not to shame Tesla, but rather to advocate for driver attention management systems that can give drivers feedback in real-time or adapt automation functionality to suit a driver’s level of attention. Currently, Tesla’s autopilot system doesn’t monitor driver attention via eye or head-tracking—two things that researchers deem necessary.

The technology in question—which is a model for glance behaviour—already exists, with automobile manufacturers like Mercedes-Benz and Ford allegedly already working on implementing it. Will Tesla follow suit or will Musk’s ‘only child’ energy rub off on the company?