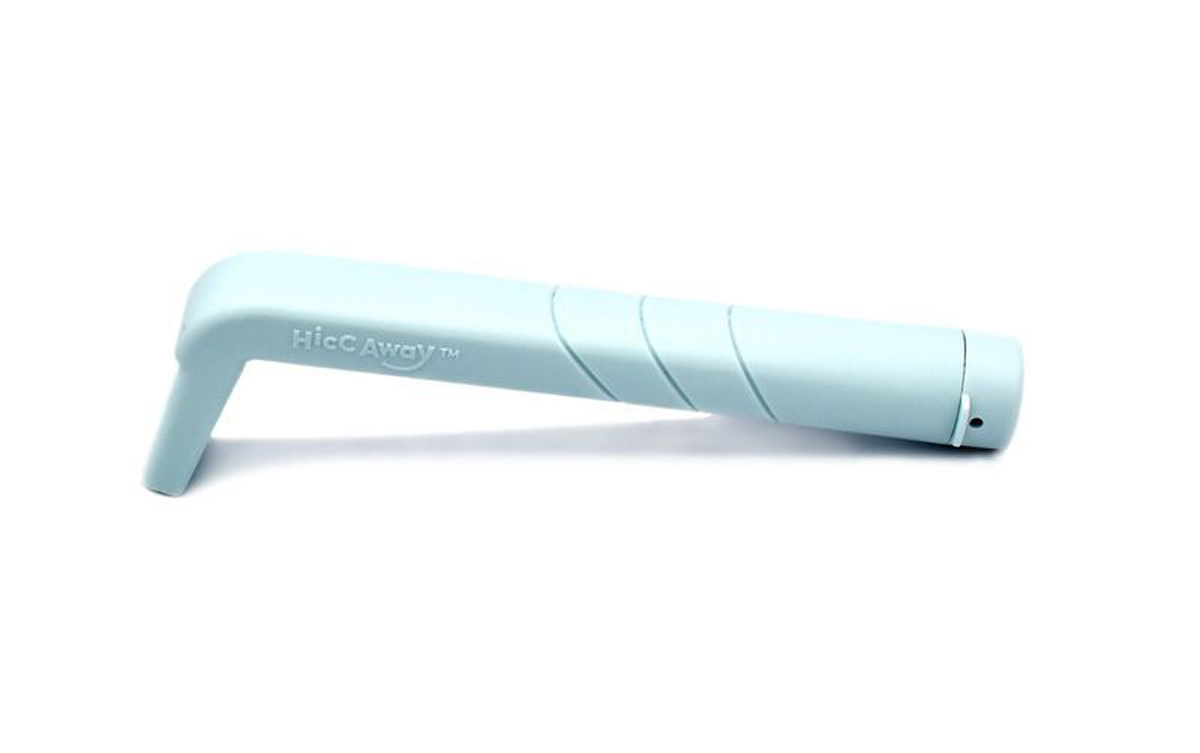 Finally, there’s a scientific cure for the hiccups

There’s nothing more annoying than a bout of hiccups that simply won’t stop. I don’t care how much you believe in it, neither drinking water with your head upside down or holding your breath for as long as you can are legit cures. Trust me, I’ve tried both every time. Worry no more though, because the HiccAway is here to solve all your (hiccup-related) problems.

Why do we hiccup?

Hiccups are involuntary contractions of the diaphragm—the muscle that separates your chest from your abdomen and plays an important role in breathing. Each contraction is followed by a sudden closure of your vocal cords, which produces the characteristic ‘hic’ sound.

Hiccups may result from a large meal, alcoholic or carbonated beverages or even sudden excitement. In some cases, hiccups may be a sign of an underlying medical condition. For most people, a bout of hiccups usually lasts only a few minutes. Rarely, hiccups may persist for months. This can result in weight loss and exhaustion.

Men are much more likely to develop long-term hiccups than are women. According to the nonprofit academic medical centre Mayo Clinic, other factors that may increase your risk of hiccups include mental or emotional issues such as anxiety, stress and excitement, and surgery—some people develop hiccups after undergoing general anaesthesia or after procedures that involve abdominal organs.

American Charles Osborne had hiccups for 68 years, from 1922 to February 1990, and was entered in the Guinness World Records as the man with the longest attack of hiccups, an estimated 430 million hiccups. During the first few decades, Osborne hiccupped up to 40 times a minute, slowing to 20 a minute in later years.

During these years, he was unable to find a cure, and continued hiccupping until it suddenly stopped.

So, what’s the trick?

HiccAway is a “forced inspiratory suction and swallow tool” that basically requires forceful suction to draw liquid from a glass. By stimulating the same body parts that execute the involuntary hiccup response, the straw can stop hiccups.

When your diaphragm contracts, it is helped by what is called the phrenic nerve while the vagus nerve shuts the epiglottis. Sounds like nonsense, I know. But what’s interesting is that when you forcefully suck on the HiccAway, and then swallow water, you, in turn, contract your diaphragm and close the epiglottis. This then stimulates the phrenic and vagus nerves, which interrupts the hiccup reflex.

“HiccAway can instantly stop hiccups by generating enough pressure while sipping from the device to lower the diaphragm while simultaneously activating the leaf-shaped flap in the throat, known as the epiglottis,” the company writes on its website. “Doing this stimulates two key nerves, the phrenic and the vagus nerves, which are responsible for the hiccups. This allows the brain to reset and stop hiccups.”

Resetting my brain does sound pretty appealing. Does the fancy straw work though?

I wasn’t born yesterday, so of course I doubted the HiccAway’s efficiency—sucking hard on a larger-than-usual straw sounds just as daft as having a drink upside down. In order to test the efficacy of the tool, researchers at the University of Texas Health Science Center in San Antonio, sent the HiccAway to more than 600 people who reported having hiccups at least once a month. Surprisingly, the results showed that the tool stopped hiccups 92 per cent of the time for the 249 participants whose responses were validated in the study. More than 90 per cent of participants said it was more effective than other home remedies.

That being said, it should be noted that the results of this survey were based on self-reported data, and that the study didn’t feature a control group. Future research could compare the efficacy of HiccAway with a similar non-functional device in order to test placebo effects.

“It’s also worth pointing out that you don’t need a $14 device to stimulate the vagus and phrenic nerves,” wrote Big Think. “You may just need a glass of water and a straw. A 2006 article published in the British Medical Journal noted that ‘plugging both ears tightly, pushing both right and left tragus, and drinking the entire glass of water through the straw without pause, without releasing the pressure over the ears’ is a ‘nearly infallible’ method to stop hiccups,” it continued.

If, like me, this solution sounds a bit too complex—do I look like I have straws in my house?—then you might want to buy at least one specific straw, the HiccAway. And if spending $14 on a hiccup straw seems too much, look at it from another angle, you could also use it as a self-control device for when you’re sipping on your favourite alcoholic beverage. Who doesn’t love a win-win situation?

Scientists have reconstructed a fossil to reveal how dinosaurs had sex

We’ve all thought about it once in our life—either on our desks back in eighth grade or halfway through a Jurassic Park filmathon…or on the first chapter of Taken by the T-Rex.

‘How did they do it?’, ‘didn’t their tails get in the way?’, ‘what about all those spikes on their back?’, ‘won’t the female end up castrating the male with all these complications?’. There has always been a smothered buzz surrounding the question of how dinosaurs had sex due to the lack of scientific evidence. All things considered, they should have had a fair amount of sex given the fact that they thrived a whopping 165 million years on earth.

Since dinosaurs aren’t exactly in the position to ‘kiss and tell’, we expected paleontologists to fill us in. However, until now, they claimed to know very little about the topic since soft tissues rarely appear in fossils. We were once again left with Pornhub’s rendition of ‘dino sex’—until the 3D reconstruction of a Psittacosaurus happened.

Unearthed at a fossil site in northwestern China, the Psittacosaurus fossil is said to be a “rare gift” with its surprisingly intact orifice, skin and pigmentation. But paleontologists weren’t able to make much of it due to its flattening during fossilisation.

It was then that a team of scientists led by the University of Bristol undertook the three-dimensional reconstruction of the fossil. The study, published in the journal Current Biology, declares the presence of a ‘cloaca’ in dinosaurs. The cloaca is a multi-purpose opening on the body of many animals including crocodiles and birds. It is a cavity between their legs that allows them to pee, poop, have sex and lay eggs, all-in-one. This is probably why ScienceAlert describes it as the “Swiss Army knife of buttholes.”

This finding also means that their sex organs were tucked inside the cloacal cavity. “You wouldn’t be able to see anything hanging low, or wobbling to and fro…,” writes Brian Switek in his book My Beloved Brontosaurus, putting an end to all careers in the dinosaur erotica industry. Both the male and female’s sex organs featured nothing but a slit under their tail from the outside—until turned on. “The slit is usually a vertical split, sometimes it’s a smiley face, sometimes it’s a sour face. This thing has a V-shaped structure with a pair of nice flaring lips…,” says Jakob Vinther, a paleontologist and senior lecturer at the University of Bristol’s School of Earth Sciences.

Most birds, termed “living dinosaurs” due to their descent, mate by rubbing their cloacas together for a few seconds. This brief ‘cloacal kiss’ is just enough time to transfer semen from the male to the female. Some paleontologists think dinosaurs may have mated like this. But Vinther believes this is not the case with the Psittacosaurus. He equates the cloacal flaps of the Psittacosaurus with that of a crocodile and suspects that they might have had a penis that emerged from the cloaca only while mating. The evidence to prove this, however, was not preserved in the fossil.

The study further reports the presence of two small bulges in proximity to the cloaca which might have had musky scent glands. This, coupled with the fact that the cloaca was found highly pigmented with melanin suggests courtship among dinosaurs. The presence of such sexual beacons to attract mates are seen in baboons and breeding salamanders. “Knowing that at least some dinosaurs were signalling to each other gives paleoartists exciting freedom to speculate on a whole variety of now plausible interactions during dinosaur courtship. It is a game changer,” the team comments after the breakthrough.

The original fossil of the Psittacosaurus currently sits in a display case at the Senckenberg Natural History Museum in Frankfurt, Germany. And until we dig up more dirt in hopes of finding them caught in the act itself, let’s wonder who called it ‘extinction’ and not ‘XXX-tinction.’