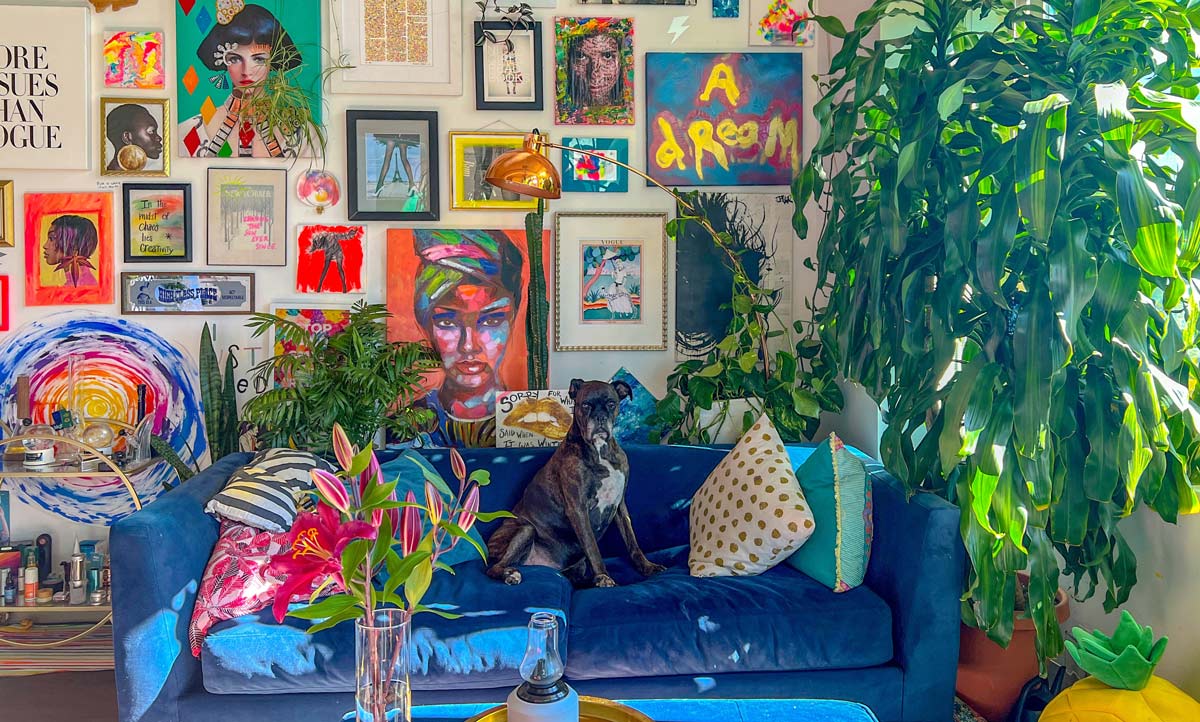 The era of perfectly-crafted lattes against white backdrops and the obsession with Eames Chairs is nearing its end. As we move deeper into the 2020s, maximalism seems to be officially in, while minimalism slowly fades out. Say goodbye to reclaimed wooden tables with sparse decor—or the nerve-wracking anxiety of trying to keep them spotless of everyday life—because ‘stuff’, in all its forms and iterations, is making a comeback.

While it may seem vapid or hyper-consumerist, this recent trend towards maximalism is actually anything but. By embracing a maximalist lifestyle, your abode is bound to feel more like you, rather than a carbon copy of an Instagram grid. So, why is this happening now and not five years ago?

Of course, the COVID-19 lockdowns have played a role in amplifying this trend over the past two years. As we collectively spent more time in our homes than ever before—and they began having to double, triple or quadruple in their purposes—they needed to be modified to accommodate our changing priorities.

While minimalist interior design aesthetics reigned supreme before the pandemic (think Kimye’s immaculate, eerie mansion), being forced to stay at home prompted us to reconsider our obsession with spaces that were void of our daily routines. This was because the lockdown home was overflowing with life 24/7. “Minimalism is hard to live with,” confirmed Diana Budds, senior story producer at Curbed. “These homes are impossible, they have no signs of life.”

Another aspect to consider is the lack of stimulation we collectively experienced during the pandemic. As displayed by trends like dopamine dressing, Affliction McBling, cluttercore and clowncore, there’s a current desire for a sensory overload because of the sensory limitations that resulted from COVID-19 regulations. Since we were restricted to communicating and experiencing via screens for so long, we’ve been craving stimulation of our other senses. Maximalism’s contrasting textures, eye-catching visuals and general playfulness all fit neatly into this desire.

TV critic and cultural journalist Judy Berman has considered how our lockdown-fuelled drive towards maximalism has opened up the door for bad taste in 2022. Now, taste is notoriously hard to define because it’s always changing. As a general rule, ‘good taste’ tends to be characterised as a refined, polite whisper, whereas ‘bad taste’ demands us to feel, react and shout. Because of our extended time in quarantine, “now it takes more energy, more audacity, more spectacle to jolt us out of our malaise—and that’s where bad taste comes in,” Berman explained.

Cultural signifiers of this shift can be found in Kim Kardashian’s recent relationship with the ‘King of Staten Island’ as well as in Hulu’s Pam and Tommy. Being boisterous in the way you live and the way you dress has become more aspirational than minimalist stoicism in recent months.

Maximalism and bad taste go hand-in-hand in part because of the proliferation of digital trends. Throughout the 90s and early 2000s, subcultures seemed to be more of a commitment. But now, adopting one requires just a quick outfit—or filter—change to visually identify within an entirely new group altogether. Harper’s Bazaar fashion news director Rachel Tashjian reflected this by declaring “we’re living through a mass psychosis expressing itself through trend reporting.”

Gen Z has grown up with an array of cultural touchstones just a tap away, so it only seems natural for them to take bits and pieces from their digital environment to try on for size. In contrast to the trend that solely promoted stark minimalism and dominated the 2010s, maximalism allows for unrestricted freedom of expression, enabling gen Zers to revel in the endless list of aesthetics that they have available at their fingertips.

The minimalism that defined the last decade had its roots in the Great Recession. After the 2008 financial crisis, the glitz and overconsumption that governed early Y2K aesthetics—examples being bejewelled Ed Hardy t-shirts and McMansions—didn’t seem appropriate anymore. Put simply by Rebecca Jennings for Vox, “Suddenly, it became less cool to look rich.” As millions lost their jobs and their homes in late 2007, corporations seemed to turn to pared-back interior design schemes to signal their camaraderie and alleged trustworthiness.

Journalist Eliza Brooke further noted in a 2018 article titled How the Great Recession influenced a decade of design that venture-backed lifestyle brands took the chance in the early 2010s to define the aesthetics of millennial-targeted startup minimalism. Brooke described the trend as creating a look that was “stripped-down but warm, with lots of sans serif letters and white space.” These visuals were paramount throughout the 2010s, from your local coffee shop to a Silicon Valley startup’s headquarters and early Instagram grids.

Kyle Chayka, contributing writer for The New Yorker, added to this, saying that nothing about the aesthetic “seemed to be in excess; every object felt hand-selected and properly placed, creating both a friendly familiarity to new spaces and an uncanny flattening of all context.” As a result, an array of spaces around the globe began to look and feel the same, not allowing for life’s nuances and diverse backgrounds to be expressed.

It seems only natural then, that as a response to a decade of minimalism, people are embracing maximalism in the roaring 2020s. Rather than relying on identical, hyper-manufactured minimalist goods to furnish living spaces, consumers have turned to objects that spark joy for them personally, beating Marie Kondo at her own game. This sentiment is expressed in digital trends adopted by gen Z, such as grandmillennial and whimsigothic styles. Younger demographics are more likely to purchase handmade objects—think crochet tops from Depop, needlepoint pillows from Etsy or floral pottery from their local charity shops—that suggest a personal history.

Brooke explained that maximalism provides consumers with an alternative way of looking at their things. Rather than being a source of guilt—à la Marie Kondo’s patented tidying method—why not look at your possessions as “a collection of joyful, personal, and perhaps complicated things that tell the story of one’s life?” When eschewing the tenets of minimalism, this fun-loving reality becomes more of a possibility.

Some even link maximalism with sustainability. Budds recognised that some may see the trend as fetishising objects, but suggested that “the greenest thing you can have is something that you can use for a long time.” By buying items and home furnishings that can evolve with our needs, in the long run, we simply won’t produce as much waste. What’s more is that, as a result, your home will likely become filled with objects you can depend on throughout your life—creating a supportive environment that reflects your one-of-a-kind journey.