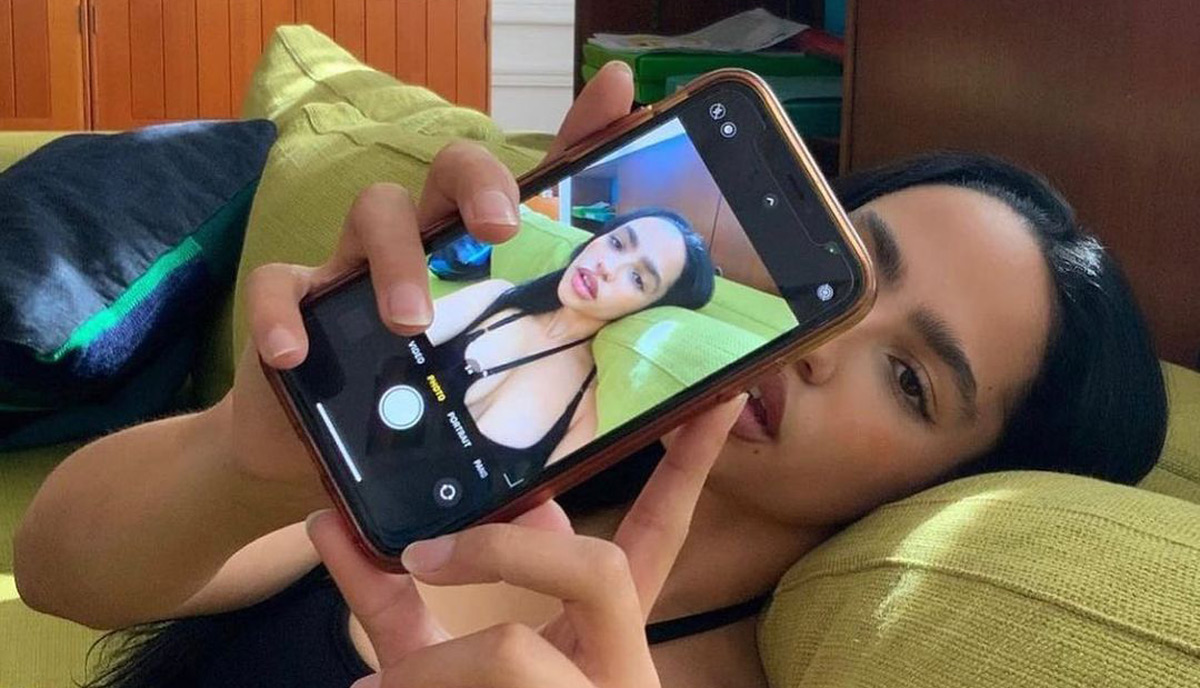 Meta selfies are here to revamp your Instagram feed with chaos

Earlier this year, influencer mirror selfies turned out to be a Photoshopped lie. All you needed was a spare phone or camera to hack your way into the cleanest, smudge-proof mirror selfies—minus actual mirrors. Presently, we’re witnessing our virtual existence evolve into a new era where social media is synonymous with anti-perfect content. With crying selfies, 3am photo dumps, finstas and shitposting on the forefront, a new aesthetic is gripping Instagram’s identity crisis. Introducing the meta selfie, a spur-of-the-moment trend that’ll make you wonder ‘why though?’ before trying it out yourself.

What is a meta selfie?

Coined by Refinery29, a meta selfie is essentially a photo of a selfie. Think about pointing your phone’s camera to a scene and clicking a picture with your hand on the shutter using another phone’s back camera. If that was mind-boggling, then imagine placing your phone on a desk with the front camera switched on and taking a picture of yourself with another phone focused on the first phone’s screen. Still can’t seem to wrap your head around it? Visualise yourself pointing the phone screen with the front camera on to a mirror and taking a screenshot of the entire interface. What in the Inception, right?

Every meta selfie is guaranteed to make the viewer do a double take of the moments captured. I mean they’re definitely trippy. As for the aesthetics of the image themselves, it seems that the lower the quality and the blurrier the result, the better. Here, the content is presented as relatable and candid, all the while rooted in obvious chaos. How 2021 of Instagram indeed. Then there’s the concept’s transparent crossover with the resurrection of Y2K. Not only has the 90s and 00s style bled into our phone cases but its aesthetics are now dictating how we take our photos—from bulky flip-screen video cameras carried around by Emma Chamberlain to the nostalgic digital flash photography preferred by Bella Hadid and Dua Lipa.

According to Refinery29, the recent boom of selfie culture is part of gen Z’s efforts to reclaim and reshape the narrative that those who take selfies are simply “self-absorbed narcissists.” Typically aimed at young women, such criticisms routinely ridicule hobbies involving social media, beauty and fashion. “The popularisation of the meta selfie feels like a departure from the effortful and contrived content that influencer fatigue is built on,” the publication added. Bye bye influencers, we’ve finally had enough.

Meta selfies instead offer the visual embodiment of the now-popular TikTok audio of Rockwell’s 1984 infamous single ‘Somebody’s Watching Me’. Attributing its eerie aesthetics to a surveillance-like feel with pixelated screens, yellow facial recognition frames and red record buttons, the trend reminds participants about their existence in a digital-first era. While this may be cause for concern for some, it reinforces the fact that gen Z is indeed the generation least concerned with how Big Tech uses their personal information. AI could soon be able to ‘hack’ humans with their biometric data and more, but do gen Zers even care as long as it aids their lifestyle? That’s a different ballpark altogether and, of course, not at all related to the fact that Zuckerberg chose to rename his company on similar grounds.

“Privacy takes a backseat in comparison to customisation and personalisation,” Refinery29 noted, adding how this trend says: we’re aware that we’re being judged and watched while our data is being mined, but we just don’t care. “It provokes viewers who eye-roll at the selfie generation, but is simultaneously poking fun at how vain it is perceived to be.”

Coveted for its raw and unfiltered vibes, meta selfies come at a time where Instagram and Facebook are in hot water for fostering body image issues and boosting anxieties around social image and money. Although this new wave of selfies is not a drastic change from the platform’s toxic ethos, it is a much-needed departure from the influencer culture Instagram typically cashes in on.

So brace yourself for some head-scratcher selfies—that you might need a pen and pad to comprehend—if this trend gains some blurry momentum. Until then, you can test the waters with the ‘boot shoot’ to show off your drip all spring.

Let’s face it, social media is a narcissistic whitewash. It’s a mirror into the life of what other people want you to see, not what things actually are. Take a quick visit to your nearest tourist hotspot, and you’ll find it flooded by people taking selfies, all for the ’gram. Those five seconds of fame. That digital serotonin hit we’re all hooked on. I have to admit, I’m not innocent in all this either, but it’s just the way social media is, right?

Candid photos of me taken by my friends are reserved for my Facebook wall—an annual event where, on my birthday, all past drunken photos come back to haunt me (queue numerous shots of drunken Jack on New Year’s eve). But this hot vax summer, a new app is setting out to change this status quo. Introducing… drum roll, please… Poparazzi. Let me explain.

Essentially, Poparazzi has a similar visual-led format to Instagram—where people can comment, like and share photos. And despite the strikingly similar interface, that’s pretty much where the similarities end. The app is divided into two parts: photos of your friends taken by you and photos of you taken by your friends. The app then displays which people you’ve snapped the most in your camera, giving a “pop” score to each user depending on how many photos are taken—similar to the Snapchat score model.

The app is calling itself the “new age of social media for Gen Z,” which is quite a statement. The concept is fun, quirky and serves a gap in the market but it’s not carving out the new Facebook or Twitter by any means. That being said, the proposed photo-sharing app doesn’t allow the use of filters, cropping, captions or any edits added on photos. This could, theoretically, help create a refreshing, authentic and realistic digital sphere that could be better for all our mental health.

The relatively new app has already raised $2 million in funding and reached a user base of 10,000 during its beta period. And when taking a step back and analysing the app’s design, you can see why it’s gained such traction. Picture this: one person decides to use the app, taking a shot of their friend and posting it on Poparazzi. That friend then receives a number of texts saying their photos have been shared on a relatively unknown, newfangled app. It’s a no-brainer that the person who received the text would then download the app to see what’s been published. Hooked by the flashy branding and sleek design, the friend then takes a photo of another friend and posts it onto the app—and the cycle continues.

It’s not all snapshots and roses

The concept behind Poparazzi is somewhat dodgy in terms of privacy concerns. The encouragement that users should share raw, candid photos of their friends (possibly without their permission) is ethically dubious—especially when our online image is intertwined with real-world consequences, for instance, during job applications where social media is often screened. However, despite this, the app has implemented measures to maintain the service is not a “wild West” of the photo-sharing world. Poparazzi requires you to tag the friends you’re posting from your phone’s contact list. Users can also choose to remove any photo from their profile, or switch their account to private so only approved users can tag them.

If you’re interested in giving it a try, Poparazzi is available, and free, on the App Store right now. And although from the brief test I’ve given it so far, I’m not itching to go and take candid photos of my mates, it is a refreshing change to other social media platforms. Whether Poparazzi is a quick publicity stunt or has the potential to become a long-term prosperous social media service is anyone’s guess. That being said, I’ll definitely be following Poparazzi closely in the coming months.