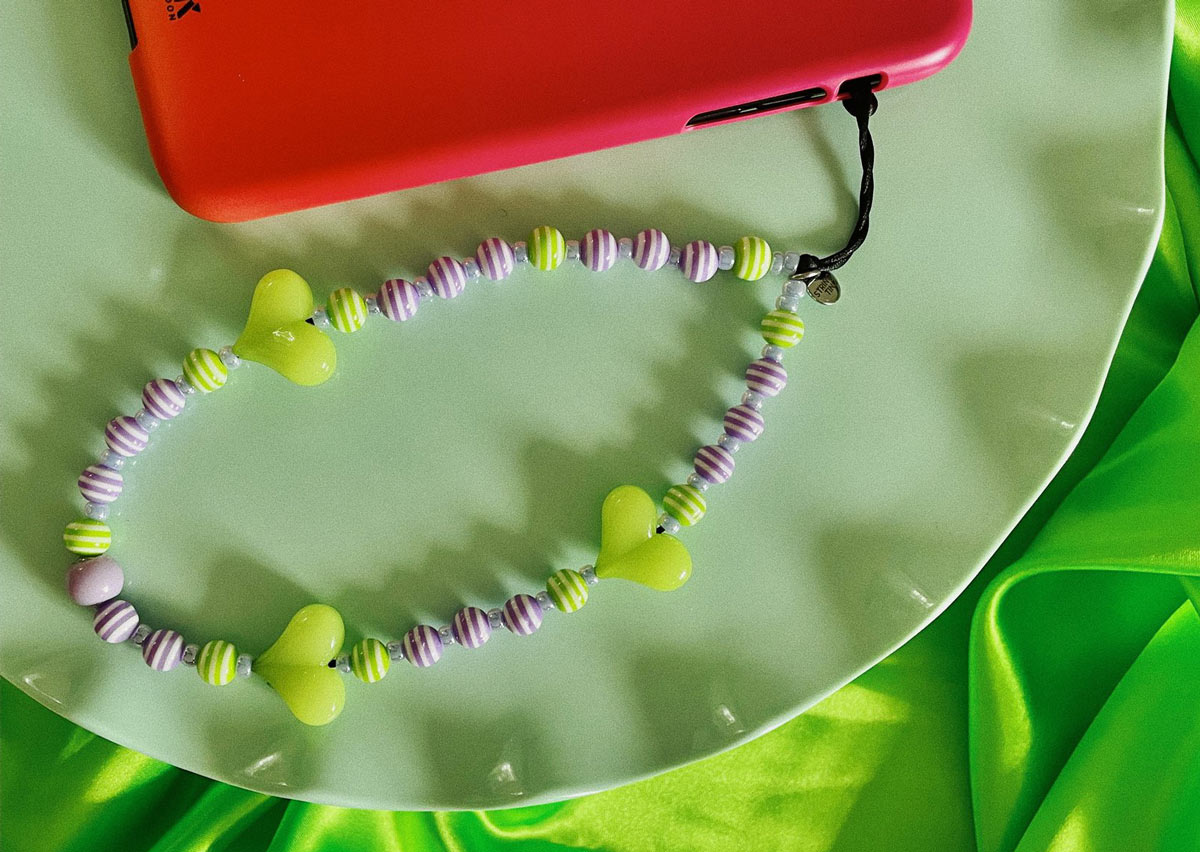 Nowadays, trends—whether global or burgeoning in specific areas like dance, tech, music or fashion—usually explode onto the scene. It feels like it happens overnight. There are some trends, however, that silently sneak their way to the top, and before you know it, every celebrity has bead strings hanging off their phones. We’ve all noticed that, right? It’s not just me? This new “techcessory” is in every celebrity selfie, it seems. Sported by the likes of Kendall Jenner, Gigi Hadid, Dua Lipa, Miley Cyrus—and literally so many others I can’t name—it looks like phone charms is the latest gen Z fashion trend to inundate our social media feeds. In all seriousness though, where can I get one?

The pioneering brand behind this viral 90s-inspired accessory is London-based String Ting. Its founder, Canadian-born Rachel-Steed Middleton initially started the brand as a fundraiser during quarantine for various charitable causes. The main ones being for those severely affected by the pandemic as well as for a number of AIDS organisations. Middleton called the brand “a happy accident” when speaking to The Zoe Report—“It started as a fundraiser during the pandemic, really as a way to teach my kids about giving back and just keeping them busy. It was the equivalent of a lemonade stand.” Now? Everyone wants a glass.

According to Vogue, “String Ting wristlets are, by this point, non-negotiable for Gen-Z influencers.” This falls into the continuing re-emergence of Y2K inspiration in today’s fashion—no but seriously, I feel like I’m reliving my six-year-old Bratz fantasy—with the bead lanyards sitting among the latest childlike fads.

Featured in second place on MashableUK’s list of the best phone trends of 2021—it appears that String Ting is here to stay. Who knows, perhaps the absolute trauma of the past year has left us yearning for the days of our 2000s childhoods? Honestly, take me back, I don’t like it here—it’s scary.

It seems like we’re all scared. In an article for CR Fashion Book, Alyssa Davis writes that “the allure to these playful jewels simply comes from the fact that children have more fun. In today’s unsettling times we crave that sense of safety and escapism that comes from being a kid. While we can’t turn back time, adults have collectively noticed wearing an element of kiddie culture can give them a sense of freedom from adulthood.” Sign me up.

Camp bead jewellery is set to dominate the summer according to Who What Wear. Similar style brands have also popped up and gained quick popularity. Worn by the likes of Bella Hadid, Joe Jonas, Barbie Ferreira and Jaden Smith—Ian Charms is the latest bead jewellery company to get the celebrity stamp of approval. A part of the popularity of this trend could be due to its ‘DIY aesthetic’—with many citing that DIY fashion is the future of the industry. And if Ian Charms doesn’t ring a bell, you must at least know one brand out of the 90s renaissance ‘holy trinity’; La Manso, éliou, mon cher moi.

Speaking to L’Officiel on the viral popularity of String Ting’s designs, Middleton stated how “the smartphone has become the new it bag,” and I couldn’t agree more. The phone has become perhaps the most important accessory to any outfit—especially for those must-see mirror selfies. String Ting’s high-quality colourful beadwork blends both the fashionable and the functional to create the perfect phone strap.

The brand writes on its website that “Every Ting has her thing. From Czech glass and Japanese Miyuki seeds; to Swarovski crystal and up-cycled vintage beads, every String Ting owns their style. Each one is unique in the way they look but not in the quality of how they-re crafted: hand-tied and sealed—every String Ting is assembled on a hard-wearing satin-cord.”

It looks like we really are having a second coming of the 2000s, the question is are you going to join in? I might. I mean, I am 24, but I still want to be a Bratz doll. Move aside Wildflower Cases, your successors have already arrived. 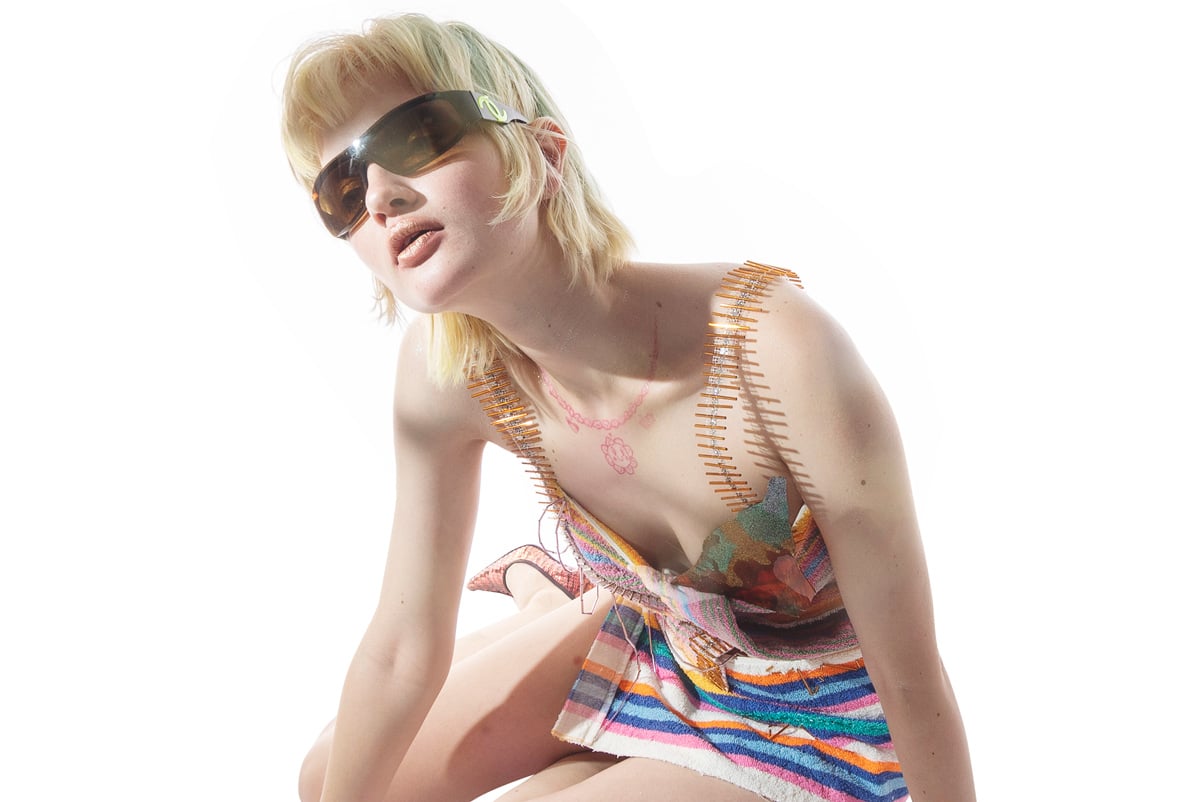 Why is Y2k fashion still trending in 2021? It’s more complicated than you think

As late 90s babies are entering their 20s, early 2000s clothing has come back in a big way. “Y2k” was one of Pinterest’s most searched terms in 2020. This popularity was reflected on Depop, where top sellers such as Isabella Vrana have made impressive careers out of flipping deadstock apparel from bygone decades. This new millennium saturation on both social media streams and online marketplaces has led to and reinforced a resurgence of bedazzled, over-the-top styles within high-end and high-street fashion. But, is there a more entrenched meaning behind all these mini-pleated skirts and knee-high leather boots than simply gen Z nostalgia?

The cause behind never-ending fashion cycles is often boiled down to nostalgia, but no one usually takes this reasoning any further. Pan Lü—Urban Studies professor at the Harvard-Yenching Institute—notes that the Greek word literally “means a longing for a faraway home that no longer exists or has never existed.” This translates into a type of generational homesickness that crops up as various demographics enter new stages of life. Lü suggests that “nostalgia becomes a collective symptom beyond the individual level. It is […] a result of a new understanding of time and space.”

Beneath the low-rise dark-wash denim and mesh tops lays the urge to return to a simpler time and space. Not just to plushy, snack-punctuated youth, but one where the internet was an untraversed, private landscape, rather than a space where you have 24/7 access to a former president’s disturbing stream of consciousness in the palm of your hand.

This renaissance is deeply embedded within internet culture of the past and present. Claire Reidy—my 15-year-old sister—for instance, noted that in her age group “y2k style is much more common online than off.” She admits that because she “was so young when these clothes were originally trendy, I don’t get that same feeling that someone a little older may get” when engaging with the garments.

By dressing in the clothing of the early 2000s, the design of the early digital sphere has been resurrected. Its glitchy, clunky ease has become a symbol of a more straightforward, less polarised time. Many popular Instagram users edit their photos of Nicole Richie-inspired outfits to recreate images that seem like they were decorated with y2k ephemera rather than taken on a £900 smartphone. Forget rose-tinted glasses; gen Zers are looking at the world (or rather, their phone screens) through rimless Chanel ombré sunnies.

While the left hand jingles in a chunky charm bracelet, reaching for a pair of patchwork pants, the right hand is now retweeting AOC and flipping through reams of Instagram Stories all ardently supportive of their side. 20 years ago, that right hand would have been perfecting a Myspace playlist on the family’s computer, or quite possibly not on the web at all.

In Jia Tolentino’s essay titled The I in the Internet, the New Yorker writer states that “the everyday madness perpetuated by the internet is the madness of [its] architecture, which positions personal identity at the centre of the universe.” Through social media profiles, algorithmically targeted ads and cyber bubbles which catalyse and hyperextend our offline perspectives, the self has become the small prism through which we view the internet and, by extension, the world.

Some designers have chosen to co-opt this madness in updated reiterations of 2000s silhouettes and textures to remind consumers just how expansive the internet truly is. Caitlin Yates, for instance, has revamped the mesh, graphic-printed y2k top with pertinent social issues through her label C8Y8S. Low-fi, grainy footage taken from Google Earth satirically comments on our ever-vigilant technology, allowing buyers to wear images of truly candid moments.

In September 2020, Marc Jacobs’ Heaven launch also capitalised on the reemergence of y2k patterns and palettes. However, the clothing label amplified its adoption of the era by including ephemeral objects in its release. The collection showcased models standing with bored expressions in maximalist teenage bedrooms: baby tees and plaid pleats hovering ‘angstily’ above a 1999-edition DVD of Sofia Coppola’s The Virgin Suicides or a VHS tape of Aphex Twin’s cult-classic Windowlicker. This time capsule full of analogue gems, however, reveals the desire to return to our insular spaces full of personal interests that weren’t perpetually infiltrated and subtly manipulated by the blinking, opinionated outside world.

For decades, nostalgia has reemerged prominently in cyclical fashion trends as a source of comfort rooted in the rising generation’s youth as well as a way to separate oneself from the current zeitgeist. Why wear fast fashion apparel when one can buy unique, secondhand Cop Copine tops from Berlin on Depop? Why stream The Virgin Suicides on your laptop—which simultaneously is now your office, television set, shopping portal and social space—when you can watch it, uninterrupted, on DVD?

These physical reiterations prompt not only a replication of the material culture of one’s youth, but also its actions and routines. The popularity of these previously obsolete trends lies in its invitation to reenact these old, mundane rituals of rewinding a VHS tape or pulling the rhinestone zipper of a velour tracksuit top.

That being said, next time you reach for a bejewelled thong or add a fuzzy bucket hat to your online shopping cart, consider whether or not you could be grasping for this larger, earlier context of relative ease and uncomplicated internet interactions as well.