Dad buys newborn son $3.1m worth of gifts and the biggest one will shock you – Screen Shot
Deep Dives Level Up Newsletters Saved Articles Challenges 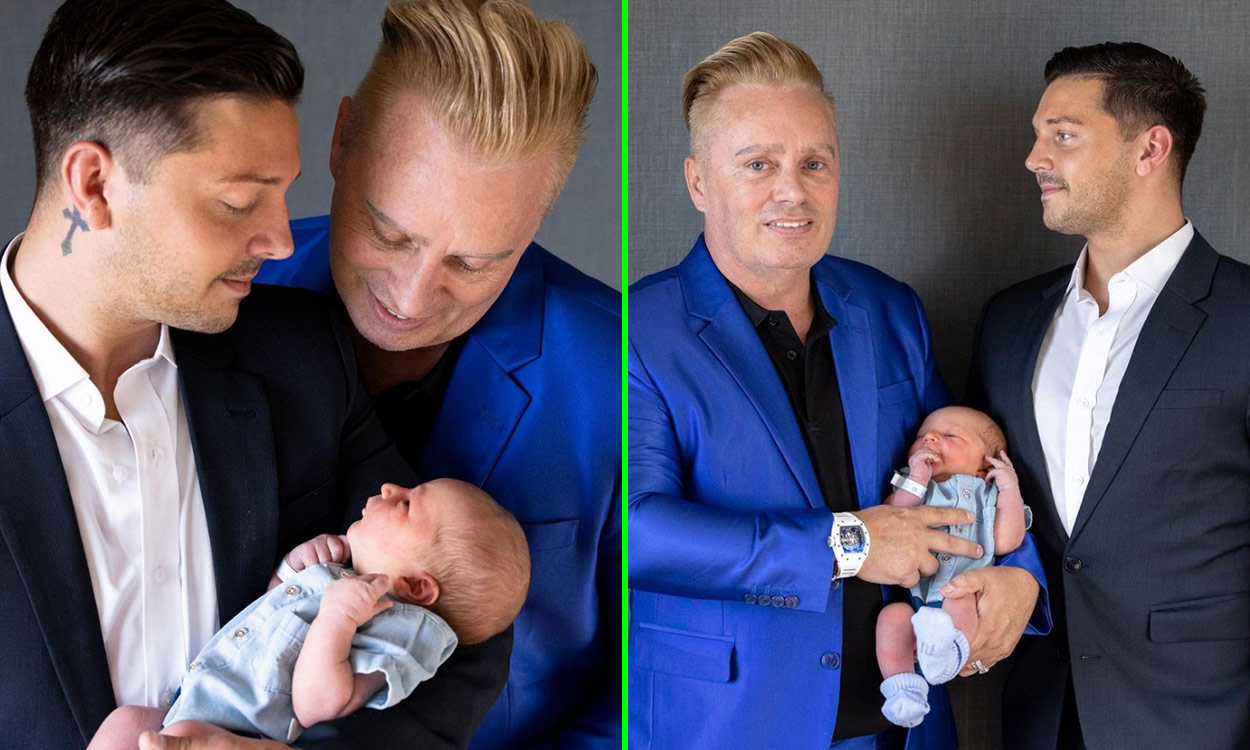 Dad buys newborn son $3.1m worth of gifts and the biggest one will shock you

Picture this: you’re expecting and you’ve just shared the news with your loved ones. While the politically correct way to guess exactly why you told them is to assume that you simply wanted to share the great news and excitement with your favourite people in the world, we all know the second reason behind your announcement. Babies are expensive and you’ll need help getting ready to welcome your little bundle of joy—meaning, you’ll be expecting presents from your family and friends.

There’s absolutely no shame in accepting a bit of help from the ones who surround you—we all need it at some point in our lives. Well, apart from one specific dad, it seems. Barrie Drewitt-Barlow, 52, welcomed his son Romeo Tarquin on Monday 12 August 2022 alongside his fiancé Scott Hutchinson, 27.

Instead of the usual toys, books, nappies and newborn furniture most expect to be gifted or partly bought second-hand, the new parents decided to shower their little one themselves—and boy did they do it thoroughly. In total so far, Drewitt-Barlow and Hutchinson spent a colossal $3.1 million on Romeo.

This—let’s be honest here—absolutely ridiculous amount included a $4,600 wardrobe jam-packed with designer clothes, which Drewitt-Barlow revealed that he has already “literally bought every designer that you can imagine” for baby Romeo.

But wait, there’s more. Not only have the two, who began dating back in 2019, spent thousands of dollars on clothes and accessories that won’t fit anymore in less than a month, they’ve also bought Romeo a yacht. Yep, let that sink in.

The $2.8 million boat, named after little Romeo himself, is currently in Miami “where Saffron [my eldest daughter] is boarding with her new boyfriend and heading over to Cuba and the surrounding islands for two weeks,” Drewitt-Barlow told The Sun.

Explaining their decision to spend millions on their newborn baby, Drewitt-Barlow continued: “We want to give him the same start in life as the other kids so we have set up a trust fund for him. Tony [my ex] gifted him $1.15 million and I matched it for him. We will obviously build up a nice portfolio of things for him over the next few years.”

If you feel like you’ve seen Drewitt-Barlow somewhere before, it’s because the new father has appeared on season two of the reality television show Below Deck alongside his ex-husband, Tony Drewitt-Barlow, 56.

Although the two have since split, they share a combined fortune of over $204 million.

As for Drewitt-Barlow’s new relationship, Romeo is the couple’s second child together after they welcomed their first, Valentina, in October 2020. And fear not, Valentina clearly received the same treatment as her baby brother, alongside her half-sister Saffron, Drewitt-Barlow’s daughter with his ex.

“Before he was born, our eldest daughter Saffron spent over $11,500 on clothes,” he told the British tabloid, adding: “The moment he was born, another $23,000—she has totally gone over the top.” Just make sure you leave some for Valentina and Romeo, heh, Saffron…

30 iconic movie scenes recreated by a dad and daughter duo

First rule of Fight Club is that you don’t talk about the stuffed teddy bears in fight club—wait that’s not right, is it? Well, it is for one dynamic daddy-daughter duo who have managed to make movie magic with their recreations of iconic film scenes. Introducing photographer Alex Zane and his daughter plus soon-to-be-star Matilda, because if you haven’t heard of them by now you certainly won’t want to miss out.

Zane, combining his skills as a dad and a camera pro, needed an outlet to keep himself and his little darling busy during the height of quarantine. With lockdown madness in full swing, Zane sparked the genius idea to recreate some iconic film moments with Matilda, who is the star of the show in all of these pictures—enjoying the glitz and glamour of photoshoots along with her stuffed animal friends. For Bored Panda, Zane edited his daughter into the widely recognised scenes with her toys and the images adapted as part of a child’s universe.

It looks like Zane and Matilda have not only cracked the code on how to kill pandemic boredom but they’ve also managed to make iconic movie scenes even cooler than the originals. Let’s have a look at them now, shall we?

Now, I’m not a tough guy looking for a mean brawl battle in an underground fighting ring, but Matilda sure has Tyler’s curious face down to a T in this picture.

I was surprised to see The Truman Show here, since it’s a film that made me personally paranoid for a good four months after watching it. The classic, starring Jim Carrey as an oblivious Truman, is iconic in its own right. This recreation of the stair scene is picture-perfect, guys.

Ah, the eccentric Addams Family—one of my favourite cast of characters to ever grace the silver screen with all their cooky and quirky mishaps. Though I wish I didn’t feel like Wednesday on a good day, I think Matilda nailed this one.

Well, hello Clarice. It seems like the duo have done it again, but I’m not too sure what’s more unnerving: Hannibal Lecter in the original film or the floating Ken doll and male Barbie heads pasted in the background—I think they might have just outdone Anthony Hopkins.

The Christmas movie which tops all Christmas movies, Home Alone spawned a franchise of holiday films and catapulted the career of Macaulay Culkin. I can practically hear that ever-so-famous scream through my screen with this photo.

Speaking on the costuming to Bored Panda, Zane admitted that it was a joint family effort. “My wife helps with hair and makeup and the sets take about two weeks to build—give or take—depending on the scene. My mother-in-law is great with sewing so she’s tailored a ridiculous amount of costumes for this. It’s truly a family project,” the photographer shared. Which seems to have worked out perfectly because that leather jacket is spot-on, almost too good to be true… Red pill or blue, anyone?

Another dynamic duo for the ages, Thelma and Louise, were the original girlboss queens—taking the world for themselves and literally riding off into the sunset together (though it was off a cliff). Hand-in-hand with her teddy bear, this picture is spot-on for accuracy too—and I mean, no one’s got your back like your plushies do, right?

Zane has also shared the difficult process of organising and taking these pictures. ”It’s tough as I have no talent as a photographer, have no equipment, lack props, and Matilda’s attention can only be stretched so far even with the promise of an awesome LOL Doll,” he told Bored Panda. However, I think this Shutter Island image is an amazing recreation.

Jay Gatsby, is that you?

“We look for scenes that are iconic enough that people will instantly recognise them but don’t require too much ‘acting’ from Matilda, or too much preparation on my part,” Zane explained, and it seems to be working. Just look at this Superbad remake.

You definitely can’t tell who’s who if you squint here.

Netflix’s hit TV-takeover is also on this list, with Matilda recreating our beloved Sandy B as Malorie rowing down the stream trying to avoid the deadly danger awaiting once she opens her eyes.

Who doesn’t love a bit of good ol’ Christmas cheer? Well, Zane and Matilda have got you covered as she’s the spitting image of Will Ferrell’s character ‘Buddy’ in this picture. Zane shared that his daughter’s favourite Christmas movie is Gremlins because of this project. “She brought the finished photos into the show and tell this year and it was my proudest moment,” he said.

Now this one features an actual teddy bear and Matilda’s could be Ted’s twin, if you ask me.

Nostalgic and fun, this shot only proves that I need to update my super boring wardrobe with some 80’s statement overalls to step up my fashion game.

For a movie that horrified me for that particular scene towards the end, Matilda easily fits in as 127 Hours’ Aron Ralston. That rock looks mighty heavy though…