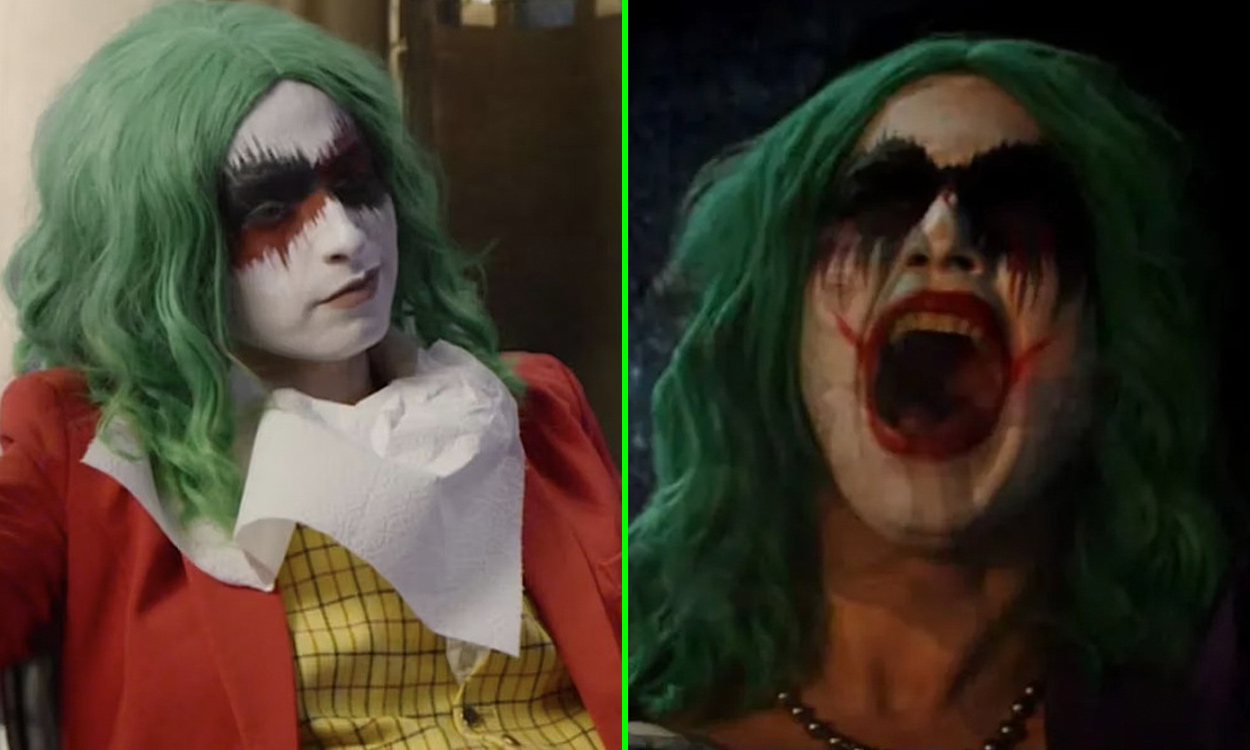 The People’s Joker has become one of the most talked about superhero movies of recent months—just not in the way its director was expecting. Birthed from a commission to re-edit Todd Phillips’ 2019 Joker movie, Vera Drew—an editor-turned-filmmaker whose past work includes collaborations with alt-comic giants Sacha Baron Cohen, Tim and Eric, and Nathan Fielder—delved into this familiar DC world and its much-loved characters to tell her own personal story of finding herself as a transgender comedian. Before the powers that be stopped her in her tracks, that is.

For Drew, what started as a COVID-19 lockdown project quickly spiralled into something hugely personal; a parody set entirely within an animated green-screened world—think Tim and Eric Awesome Show, Great Job!—where familiar faces from Batman’s lore help the filmmaker’s trans heroine, Joker the Harlequin, discover her true identity. Along the way, she battles body dysmorphia and toxic relationships, and works with master entertainer Ra’s al Ghul (played by Awesome Show regular David Liebe-Hart) to fulfil her comedy dreams, all while encountering cameo appearances from the likes of Heidecker and Better Call Saul’s Bob Odenkirk.

The final work has a low-fi aesthetic that’ll no doubt be familiar to any Adult Swim fan—and with Drew sharing details of the movie’s creation throughout production, audiences were keen to view the end results. Billing itself as an “illegal, queer, coming-of-age comic book movie,” she took The People’s Joker to the Toronto International Film Festival (TIFF) in September 2022, eager to unleash her personal odyssey onto the world.

However, before the film’s midnight debut, she received a letter from Warner Bros. Discovery—the media giant that owns the rights to DC Studios—stating that her film was an infringement of copyright laws, despite very clearly being a parody. With that, the future of The People’s Joker was suddenly left in limbo.

“I’ve always loved these characters,” Drew admitted, speaking to SCREENSHOT a few weeks after the arrested development of her movie. Recalling how the Joker’s re-edit job spiralled into her first feature film, she continued: “I’m obsessed with myth and story structure. If these characters actually are our modern myths, we use myth[s] to understand ourselves and come of age, so I felt this burst of inspiration.”

“I loved Todd Phillips’ movie. It felt like one of the first superhero movies that had class consciousness and was about somebody who not only came from a broken family structure but the system itself had left this person behind and pushed him to the edge,” she added. “I related to that a lot as somebody who’s dealt with mental illness—but also just as a trans person. I really got inspired by this remix idea and decided I wanted to make a queer, coming-of-age Joker movie.”

After revealing the project online, the response Drew received was overwhelming. “I announced I was making a Joker movie and it was going to be the first time a trans woman would ever play the [character],” the filmmaker mentioned. “I told viewers it was a queer, coming-of-age story and basically opened up the creative process to anybody that wanted to participate. The next day, I woke up to a bunch of messages of support from people who were like ‘I’m an artist and I want to help you do this’. It was incredible.”

For Drew, this is when the work evolved into a big community project scattered across the globe. “It really felt like, for the first time in my life, I was making something that was art for art’s sake,” she admitted. “We weren’t really thinking about what the end result was going to be, we were just telling this crazy, very autobiographical Joker story.”

Of course, before she began, Drew was eager to ensure that this unauthorised project was legally sound. With The People’s Joker parodying DC’s biggest stars, she was keen to make sure her hard work—and the work of her collaborators—would be seen when it was finished.

The creator admitted that she worked closely with a lawyer during the writing process to guarantee her film fell under fair use—and with the movie filled with original content, she’s convinced it should still be able to continue screening. “I always wanted the best for this movie. I hoped we could play at festivals, so I really did safeguard the process as much as possible,” she said, adding that the guidelines her team followed were based on the precedent of fair use.

“I’m not using any footage from these movies—we recreated sets from Todd Phillips’ Joker and all the material in the movie is completely original. We’re using these known entities and putting our own spin on them to describe the queer experience.” Apart from this, Drew believes The People’s Joker also encapsulates the experience of what it’s like growing up inside a system that’s completely failing you every step of the way.

“I feel everyone can relate to this, regardless of whether they’re trans.”

After receiving the letter from Warner Bros. Discovery at the eleventh hour, Drew moved forward with her planned midnight TIFF screening but cancelled future presentations for fear of legal ramifications that could potentially keep her in court indefinitely. Instead, she’s used this time to refine the movie following its initial audience airing and formulate a plan for its future. She also had to recast one key role—a spoofy take on Saturday Night Live (SNL) boss Lorne Michaels, who’s featured as one of the movie’s villains—after the star who originally provided his voice, current SNL cast member Sarah Sherman, decided to bow out of the project.

“The new voice of Lorne Michaels is Maria Bamford, which is a childhood dream come true,” Drew said, exclusively revealing her latest cast member to SCREENSHOT. “I’ve seen some of my fans hit low feelings over what happened at TIFF. Warner Bros knew about this project over a year ago. I had meetings where I specifically told people what I was doing and they waited until the last minute to pull the rug out from under us.”

The filmmaker noted that Warner Bros. made her team pull the plug on future screenings, then it got reported that the movie was never going to screen again. “It’s been hard for me to read that because it’s not true—but it’s harder for the kids who have been looking forward to this movie,” she reasoned. “I want to assure them that they’re going to get to see it at one point or another.”

Based on the reactions Drew has witnessed from her audience, it seems like her very personal trans-Joker story is one that many others have also found solace in. “It’s been very cool seeing how it resonates,” she admitted. “I had a parent of a trans person come up to me after a screening and say how much the movie meant to her. I never once considered that the mother of a trans person could watch this and be like ‘Oh my god. I needed this movie my entire life’.”

The creator has also found it refreshing to inject a new narrative into the often sombre genre of trans cinema. “As a trans person that’s queer who makes things, one of the most frustrating things I always hear is that my identity or the stories I want to tell about my life are somehow not mainstream. Why do queer movies have to be these depressing, sad, sludgy walks through the swamp of trauma and pain?” Drew argued in this regard. “Why can’t they be a fun, colourful, very gay superhero movie?”

Curious about what the future holds for The People’s Joker? If so, watch this space. “Our release plan is slowly taking shape. I’m very confident the movie’s protected by fair use and parody law, and while I don’t have any specifics, I do think we’ll start screening again soon—because we can,” Drew revealed. “For fans who want to see this movie, please keep posting about it and every time you see me say something about it, please signal-boost it as much as you can.”

It’s official everyone, Lady Gaga will star alongside Joaquin Phoenix as Harley Quinn in the Joker sequel, Joker: Folie à Deux, which is due to hit theatres in 2024. The singer, songwriter, and Oscar-winning actress took to Twitter to reveal the exciting news and shared a teaser trailer for the new film.

American filmmaker (and occasional actor) Todd Phillips is set to direct the sequel after previously securing 11 Academy Award nominations for his first Joker film. Needless to say that Phoenix and Gaga are in good hands.

But don’t get too excited just yet—while we now know a bit more about the cast and director, little is divulged about the highly anticipated sequel’s plot, though the film’s title might give us some clues.

Folie à Deux translates to “the madness of two” in French and it’s also known that the film is rumoured to be set in Arkham Asylum—which fans of the Batman comics will know serves as a psychiatric hospital for the Gotham City area, housing patients who are criminally insane, as well as select prisoners and is where the Joker and Quinn first met, with the latter serving as the villain’s psychotherapist.

In no time, Quinn becomes entranced by the Joker and ends up joining him on a rampage of madness. If that wasn’t enough to excite you about the new film, maybe this will: it’s reportedly going to be a musical.

Considering Gaga’s acclaimed performance—and singing, duh—in A Star Is Born, we can’t wait to see what she has to offer as Quinn. And it seems we’re not the only ones. “GAGA YOU BROKE THE INTERNET AGAIN YASSS WE LOVE TO SEE IT,” a Twitter user wrote in reply to the news.

Meanwhile, Little Monsters rejoiced in hearing their icon’s new song ‘Cheek to Cheek’, which was featured in the teaser and originally sung by Fred Astaire.