After rape in the metaverse, people are debating if online teabagging is sexual assault

In December 2021, a female researcher claimed that she was “gang raped” in Facebook’s metaverse. “Within 60 seconds of joining—I was verbally and sexually harassed—3-4 male avatars, with male voices, essentially, but virtually gang-raped my avatar and took photos—as I tried to get away they yelled—‘don’t pretend you didn’t love it’ and ‘go rub yourself off to the photo’,” she wrote in a Medium post. Five months later, another female researcher witnessed her virtual avatar raped within just an hour of donning her Oculus virtual reality (VR) headset.

Now, as the VR industry is finally having a reckoning over toxic cultures of sexual harassment, a decade-old in-game display of dominance is making a comeback among the discourse it has gathered online. Yes, we’re talking about teabagging, briefly known as “corpse humping,” and the sexually-suggestive history of gamer taunts.

For the uninitiated, ‘teabagging’ refers to “the act of a man inserting his scrotum in another person’s mouth, in a similar motion as when a tea bag is juiced into a mug.” Brazenly-put, it is the hallmark practice of crouching over a fallen opponent and “rubbing your cyber-balls across his digitised forehead.” If you still haven’t perfected the mental image, here are some live visuals:

Although it’s impossible to trace teabagging to a specific player or group of players, it is assumed that the practice began somewhere around the era of Quake or Counter-Strike back in 1999. That being said, however, teabagging truly gripped the gaming community only after the release of Halo: Combat Evolved in 2001.

Nearly 21 years after it gathered traction as a universal gamer taunt, netizens across the world are once again debating whether the practice “counts as sexual assault” or not. The discourse was revived after screenshots of a Discord conversation went viral on Twitter.

“Yep and then we get into games where people think it’s okay to tbag and that it’s funny, when really it’s sexual assault. Ugh we live in a gross world, I just want to beautify it,” the first message reads. Another user is seen replying and stating, “If tbagging is sexual assault then I’m a repeated sex offender.” An average Discord conversation, if you ask me.

Meanwhile, another reply read, “I mean it is sexual assault. If I do not consent and someone rubs their genitals in my face that’s sexual assault. I wouldn’t be proud of being a repeat offender. You may think it’s just a video game. Well, I grew up with a large crowd of boys who did that for fun, all the time to other people irl. It’s not funny. It’s disgusting.”

The concerns were also echoed on Reddit as a user shared screenshots of a Tweet that read, “Imagine saying that because you won a round, it is okay to teabag someone’s corpse in-game. It’s not. Unless there’s express consent from everyone, including those who would have to watch it. It’s sexual harrasment and it has to end.” A quick scroll through the comment section under the post essentially features the same argument: if teabagging is sexual assault then killing another character in a game is murder.

Meanwhile, other users highlighted how likening the practice to sexual harassment is actually “an insult to actual victims.” “As someone who was a victim of r-word, teabagging in a video game is not sexual assault. Please do not speak from our behalf if you did not go through the same stuff,” a Twitter user wrote in this regard.

Now, it’s worth noting that teabagging was once even banned from a Killer Instinct tournament back in 2017. The female equivalent of the controversial act is also known as “clam clamming.” While teabagging is immature and signifies poor taste, I’d like to highlight how context matters for such practice in gamer culture.

For example, if your opponent has hacked or cheated their way to victory, perhaps a fleeting moment of teabagging is acceptable. But when three or four players gang up and track an opponent down specifically to teabag their digital avatar, that’s toxic. This doesn’t honour the team’s skill. Rather, it’s a display of hostility above all else.

Though rooted in controversy, teabagging has become an integral part of gamer culture and is ultimately here to stay. But not all hope is lost for those who believe the practice needs to be eradicated altogether. In Destiny 2, players once requested its developers to create a teabag emote. Now, the emote in question wasn’t of someone actually teabagging another player but users suggested that it should show one dunking a tea packet into a cup of hot water—a metaphor of sorts.

While the developers never did give players such a spot-on visual, they did offer the ‘Cup of Tea’ emote, which shows a player preparing a cup of tea and drinking it. It was a lighthearted way to convey the meaning of the teabagging—minus all the borderline-traumatic visuals. 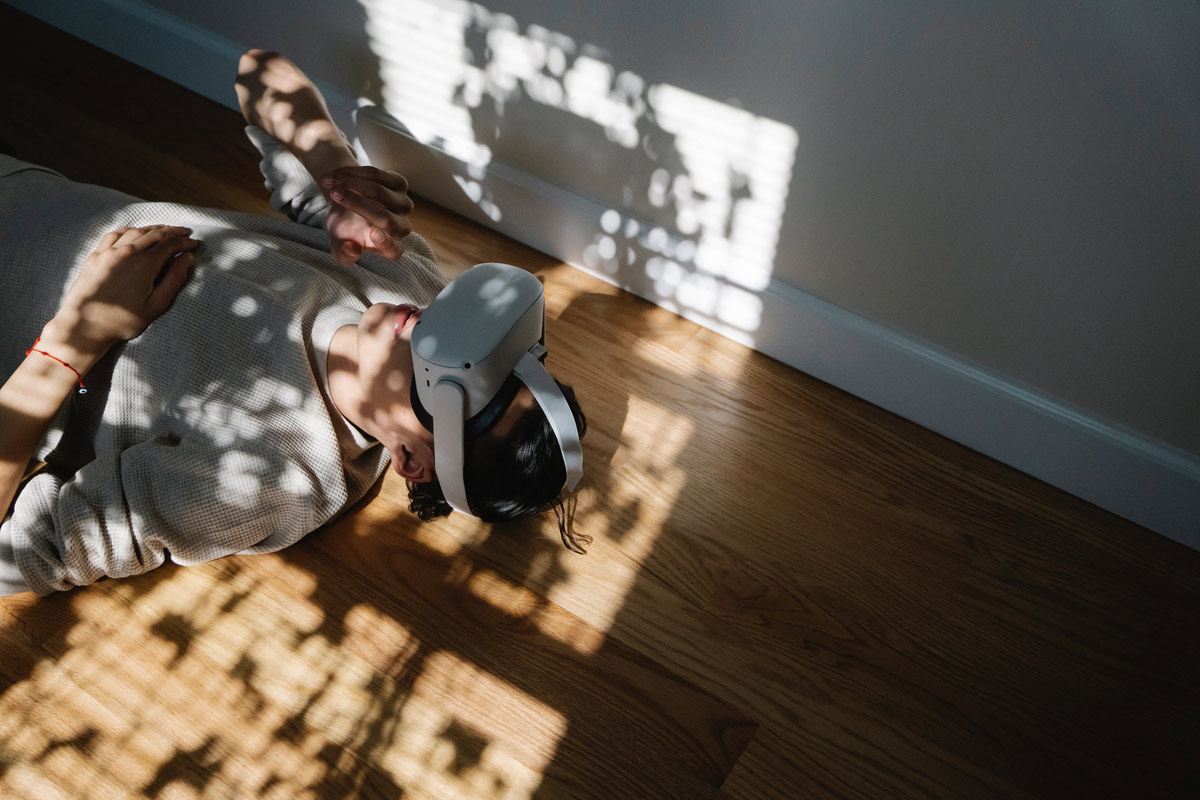 Another female researcher reports being virtually raped in Facebook’s metaverse

Concerns about the experiences of women in the metaverse have continued to unfold as more cases of virtual sexual assault hit headlines. The latest experience comes from that of a female researcher who, while studying the behaviour of Meta’s Horizon World users, saw her virtual avatar raped within just an hour of “donning her Oculus virtual reality (VR) headset,” Business Insider reported.

The researcher in question was part of non-profit corporate accountability group SumOfUs’ investigation Metaverse: another cesspool of toxic content, which was published 24 May 2022. In the report, the violent encounter experienced by the analyst is detailed. According to SumOfUs, its researcher was led into a private room at a virtual party and subsequently assaulted by a user who instructed her to “turn around so he could do it from behind while users outside the window could see.”

A sectioned clip of the recorded footage, which was linked as part of the group’s research and seen by SCREENSHOT, shows the researcher’s avatar (who cannot be externally seen as it is from her perspective) assaulted by one user while another watches and attempts to ply her with virtual vodka. The act was non-consensual. “It happened so fast I kind of disassociated. One part of my brain was like ‘w[hat] t[he] f[uck] is happening’, the other part was like ‘this isn’t a real body’, and another part was like, ‘this is important research’,” the researcher explained.

In the short clip, the male users can be heard making vulgar commentary and it’s been highlighted in the paper that while the assault was taking place, the VR controllers vibrated (which occurs when your avatar is touched)—leaving the researcher overwhelmed by a disorienting physical sensation in conjunction with the assault. To make the matter worse, this is undeniably not an isolated incident, with SumOfUs citing the very infamous case of Nina Jane Patel who reported being ‘gang raped’ in Meta’s VR in February 2022.

“Given the failure of Meta to moderate content on its other platforms, it is unsurprising that it is already seriously lagging behind with content moderation on its metaverse platforms. With just 300,000 users, it is remarkable how quickly Horizon Worlds has become a breeding ground for harmful content,” SumOfUs wrote as part of its findings.

Alongside these cases, the group also cited the case of an anonymous beta tester for Horizon Worlds whose avatar was groped and, despite filing a complaint, was actually blamed by Meta while the virtual aggressor reportedly went unpunished. Multiple similar external incidents beyond SumOfUs’ internal research were listed. But it doesn’t end here—the organisation’s inquiry also surfaced a cesspool of conspiracy theories, graphic content and hate speech.

Linking to an investigation carried out by BuzzFeed News, the group noted that “within [just] a few minutes of logging into [Horizon Worlds], SumOfUs researchers experienced homophobic slurs, gun violence (including a shoot out at a house party), drugs laid out on a table, and a user stalking the researcher and following her into different worlds.”

Following its findings, SumOfUs has since filed a resolution to a cluster of shareholders requesting a human rights risk assessment of the virtual world to be conducted by the company, the BBC reported. The non-profit group’s campaigns director, Vicky Wyatt, went on to tell the BBC Tech Tent podcast, “Rather than Facebook rushing headlong into building this metaverse, we’re saying look, you need to stop [and] look at all the harms that are happening on your platforms right now that you can’t even deal with.”

“Let’s not repeat and replicate those in the metaverse. We need a better plan here on how to mitigate online harms in the metaverse,” she added.  A spokesperson for Meta spoke to the Daily Mail in response to the accusations made by SumOfUs, stating that the researcher in question did not have the ‘Personal Boundary’ feature activated. The tool, according to the spokesperson, is automatically on by default and forbids non-friend users from “coming within four feet of your avatar.”