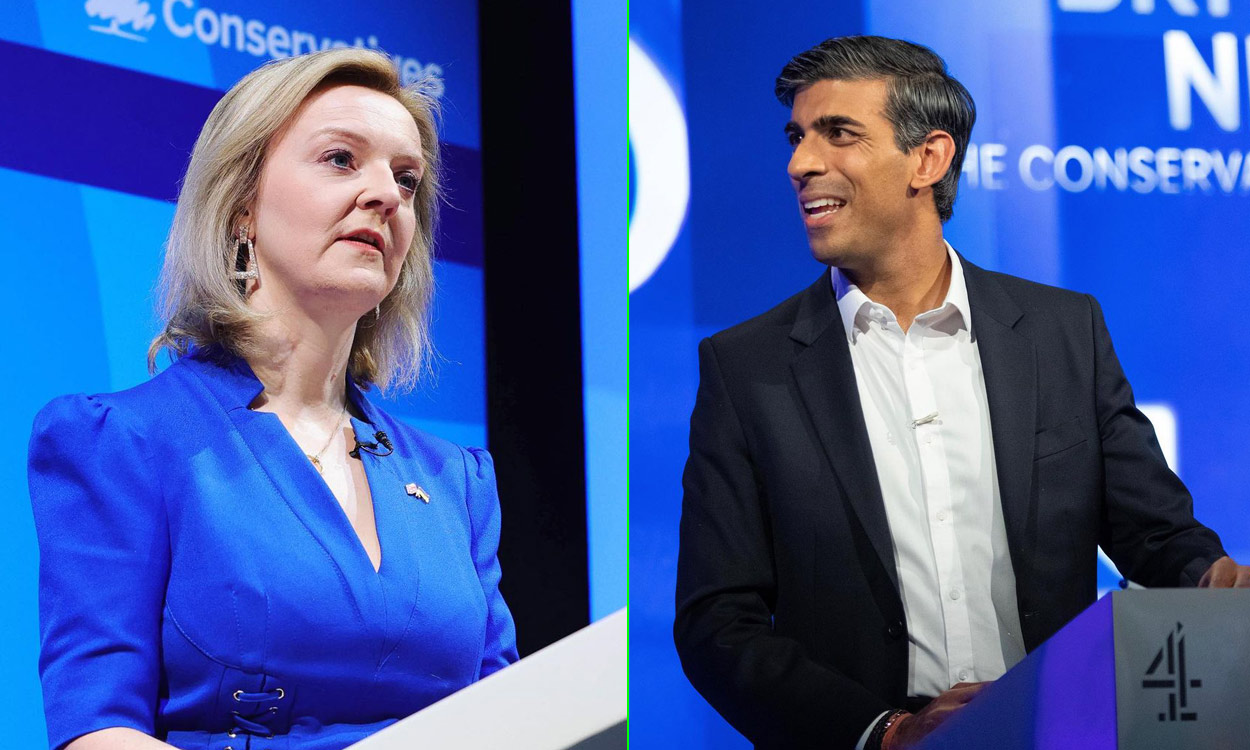 Liz Truss or Rishi Sunak: which future Prime Minister is the lesser of two evils?

It’s been an eventful few months—or weeks, even—in British politics that it’s become hard to keep up with things at this point. Now, instead of the usual quietude of August and parliamentary recess, we have a contest to select the next Tory leader and, thus, the de facto Prime Minister.

Conservative party members have until the start of September 2022 to vote for the lesser of two evils: Liz Truss or Rishi Sunak, or, as one Tory insider put it, “batshit and the billionaire.”

Truss and Sunak were both senior cabinet ministers for much of Boris Johnson’s time as leader of the Conservative party and Prime Minister (PM), occupying two of the Great Offices of State. Sunak’s resignation was one of the first to ignite the infamously huge walkout from Johnson’s government—along with Secretary of State for Health and Social Care, Sajid Javid—which ultimately led to the end of Johnson’s premiership.

In his resignation letter, Sunak wrote: “The public rightly expect government to be conducted properly, competently and seriously. I recognise this may be my last ministerial job, but I believe these standards are worth fighting for and that is why I am resigning.” However, if the former Chancellor really cared about competence and high standards in public office, why didn’t he resign sooner?

Truss continues to serve as Foreign Secretary—one of the few ministers to remain in Johnson’s cabinet—but has claimed this is mainly due to the fractious state of global politics, which apparently requires her ongoing expertise, rather than tacit support for the latter’s leadership. Despite this, will either of the leadership nominees manage to adequately distance themselves from the soon-to-be former Prime Minister and his scandals?

Both parties gunning for Tory leadership have not gone unscathed by political scandal themselves while in government. Sunak, respectively, was fined as part of the ‘Partygate’ investigations, which proved catastrophic for Johnson’s wider public popularity. Truss herself had an 18-month-long extramarital affair with fellow Tory MP, Mark Field, in the mid-00s. Her marriage, however, did survive and with Field no longer an MP, there would be no conflict of interest if she becomes PM.

Sunak, more recently, came under scrutiny for his wife’s non-dom tax status, a loophole in the system that allows her to avoid paying an estimated £20 million in taxes to the UK government. He also held a US green card until 2021, including eighteen months when he was Chancellor, which required filing US tax returns too. None of this was deemed to break ministerial rules—but that is now quite a low bar for scrutiny.

This is perhaps the most high-profile leadership contest there’s been, with more visibility and scrutiny than either Theresa May’s, which she won by default, or even Johnson’s. Truss is prepared to rip up the rulebook and implement bold and sweeping policy throughout the government—yet she is ideologically unmoored and seems malleable, changing her perspective based on what she believes will win her the necessary support.

This in itself shows how dangerous and nonsensical this specific process for choosing a new Prime Minister is: winning solely because of the whims of Conservative party members—but will this carry over to real success in a general election?

Both candidates appear to be veering to the far-right on many social issues, including demonising trans people and attacking refugees. They have both promised a “dramatic expansion” of the unsuccessful and cruel Rwanda asylum scheme.

Sam Nadel of Oxfam said, as noted by the Wharfedale Observer: “This shows that the heat of campaigning leads to bad policy.” Sunak has promised a “manifesto for women’s rights” which would argue that trans women should be excluded from women’s sporting events. Truss, in her ongoing role as Equalities Minister, stalled and stopped the reform of the Gender Recognition Act (GRA) despite extensive evidence and testimony supporting changes, so much so that she was dubbed ‘Minister for Inequality’.

Truss came out swinging in her campaign, blaming the past few decades of economic policy for the poor growth we are seeing now—thus a mixture of Labour, Conservative, and coalition governments—while seeming to ignore the impacts of Brexit (which she herself opposed for years) and the COVID-19 pandemic (that resulted in the tax rises reluctantly implemented by Sunak).

Many have compared her—sartorially and in intention, if not effect—to former Tory Prime Minister, Margaret Thatcher, thanks to her proposed policies of low tax and low regulation. Truss wants to slash taxes for everyone, paying for £30 billion cuts with borrowing, including a reversal of the recent national insurance rate rise (which was implemented to fund health and social care). Alternative sources of funding have yet to be announced.

Chris Patten, who served in Thatcher’s cabinet, criticised the Foreign Secretary’s plans: “Margaret Thatcher was a fiscal Conservative who did not cut tax until we had reduced inflation. She was honest and did not believe in nonsense.” Truss argues that cutting taxes will help lower inflation, whereas Sunak plans to first tackle inflation, then to cut taxes.

Sunak also seems to be altogether more pragmatic where it concerns the climate crisis, including the re-establishing a Department of Energy and starting a massive expansion of offshore wind farms, in order to make Britain energy self-sufficient by 2045.

Truss, meanwhile, wants to review the current ban on fracking (a method of extracting oil) and temporary moratorium on the green energy levy. There is a worrying and frankly dangerous amount of foresight in her plans: between the recent heatwave and the imminent rise in energy bills, we not only need action now, but also long-term thinking and solutions for combatting the causes of the climate crisis.

Labour, under Sir Keir Starmer, consistently trailed behind Johnson’s Conservatives in the polls, often failing to capitalise on the government’s pandemic response and scandals such as ‘Partygate’. However, where it pertains to aspiring leaders Truss and Sunak, they are significantly behind the opposing party in the major polls now—although one poll has put Truss ahead.

It’s an awkward length of time before the next general election, set for May 2024, happens. Will the next roughly 20 months be long enough to establish a cabinet identity and a governmental agenda in time to see real effects before starting the election campaign?

There are even rumours that Johnson is predicting that the next Prime Minister will have a disastrous and short-lived premiership, and the party will need yet another leader with charisma and charm to lead them through the 2024 election and beyond—so perhaps he will be back.

While over 10,000 Tory party members have signed a petition to put him on this summer’s ballot, it’s worth noting that stranger things have happened…