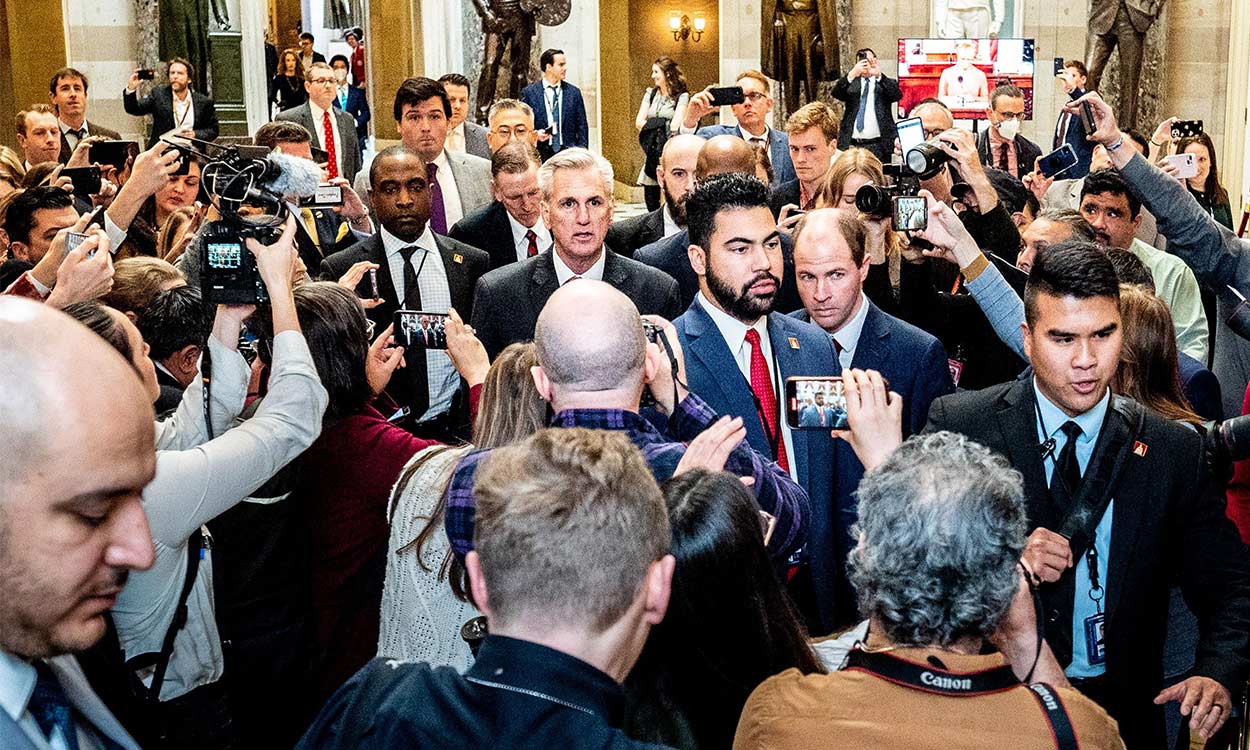 When watching a highly contested political leadership appointment begins to feel more like an episode of The Real Housewives of Beverly Hills than a pragmatic and important function, you know democracy at its base level is under siege. The ongoing battle to elect a new Speaker of the US House of Representatives has dropped the veil on a number of divisions within the Republican party. So much so, that we felt the need to investigate and shed light on some of the pettiest and most Trump-esque disputes.

Now, while Republican infighting is nothing new, the recent US Speaker election has given us the opportunity to see it fully exposed at the core. It’s evident that former President Donald Trump has had a transformative impact on the Grand Old Party (GOP)—one that’s resulted in greater friction, dirty strategy and a resolute rejection of cooperation.

As emphasised by political publication The Hill, Trump’s influence on Republican rhetoric and policy priority has been insurmountable. And with the orange politician’s agency and authority crumbling around him due to recent legal woes, it’s clear that the conservative right is struggling to find a new leader. Although, as unfortunate as it is, there is still an abundance of loyal supporters pushing his agenda. Can someone please just finally put Trump in prison?

After three days of voting, the 118th Congress made history by failing to elect a House speaker after 11 rounds of voting. As reported by The Guardian, the protracted stalemate marks the first time since 1859 that the House has required more than nine ballots to determine a new speaker.

Who is the frontrunner for the new Speaker of the US House of Representatives?

Since the Republicans regained control of the House—thereby removing Democratic and House Speaker Nancy Pelosi from her position of authority—the GOP have been lining up their top candidates to take over leadership of the second chamber.

So far, the primary front-runner has been long-serving Republican and Californian politician Kevin McCarthy. And while you’d think that he’d be a popular choice among Trump supporters—having previously propped up the rise of radical anti-establishment lawmakers in Washington—it seems as though he’s now become the enemy. McCarthy needs to receive 218 votes to secure victory and, currently, he’s facing dissent from 20 fellow Republicans.

According to CNN, one of the main reasons McCarthy is facing opposition is due to disruptor politicians, all of whom conveniently own a wardrobe full of Make America Great Again (MAGA) merch. However, as was witnessed after Trump’s somewhat limp launch for a 2024 presidential bid, it seems as though Trumpism lives on, even with the absence of the world’s greatest troll himself.

It only takes five defections from within his own party to lose McCarthy the election and so what started as a typical leadership race has quickly deteriorated into a case of bribery and sordid negotiation.

You can always rely on the US media to conjure up a list of humorous nicknames while in the midst of political turmoil. The Never Kevin crew represents the 20 Republican House members firmly opposed to the Californian politician’s appointment.

19 out of the 20 disruptors come from the Freedom Caucus—a group of ultra-conservative House Republicans that have repeatedly been a source of conflict within the greater GOP collective. According to the BBC, the rebels in the party have suggested that McCarthy is too closely aligned with a broken system and will do little to change how Washington is governed.

They’re demanding a serious disturbance of the status quo—sound familiar anyone?—and have been holding out their support while they try to gain concessions in regard to how bills are brought to the floor as well as demanding personal favours.

The ‘Taliban 20’ have made it their sole mission to block McCarthy’s succession by all means possible and it’s inherently emblematic of the pure chaos erupting within the once considered solid and stoic Republican party.

Regardless of political ideology or persuasion, it’s mind-blowing that these supposedly sanctified and relatively cordial important democratic appointments are now subject to the same level of cattiness witnessed on every season of Below Deck. It looks worryingly similar to how it felt in 2016 when Trump shook the globe and won the Presidency—as though the ship has well and truly sunk. 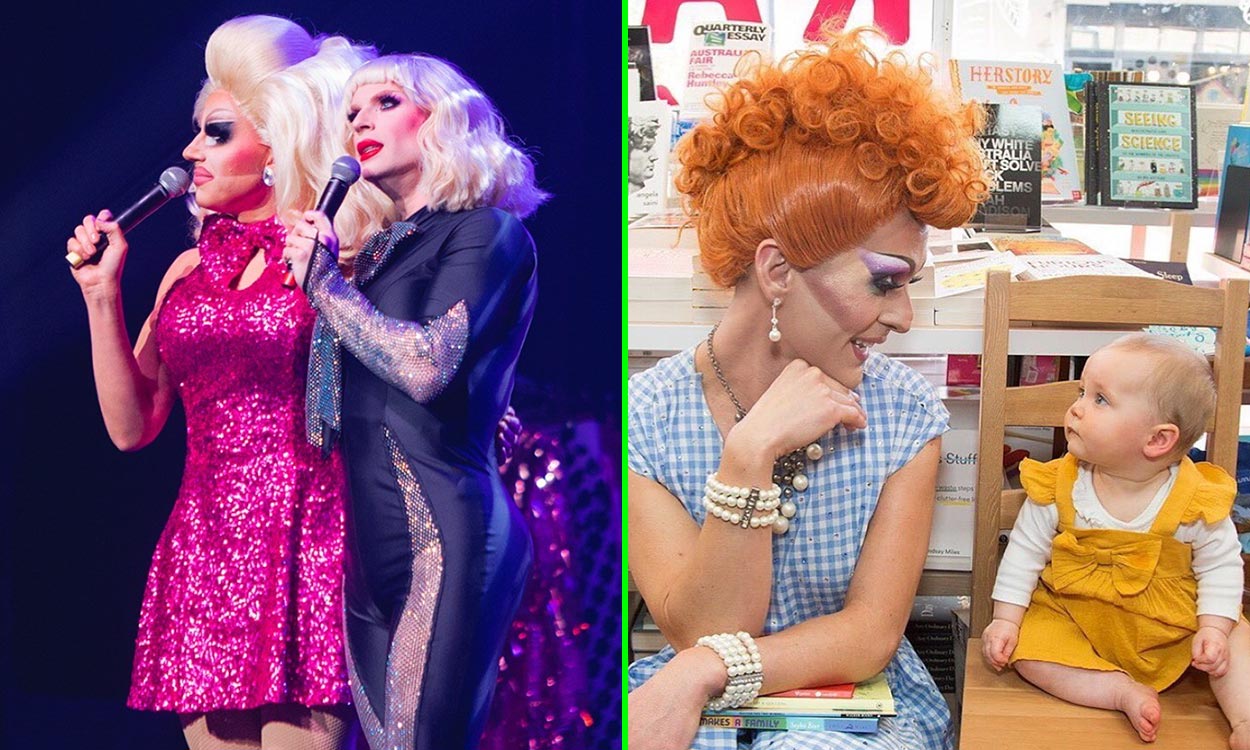 The US Southern states are ramping up their recent crusade against drag performances. Lawmakers in Tennessee are proposing heavily anti-LGBTQIA+ legislation that will not only ban public drag performances but also restrict access to gender-affirming health care.

According to PinkNews, the proposed legislation was put forth by Tennessee Senate majority leader Jack Johnson and House majority leader William Lamberth, who were both successful in winning reelection during the recent midterms. Senate Bill 1 (SB1) seeks to criminalise gender-affirming health care for those under 18, while Senate Bill 3 (SB3) would ban public drag performances—on the off chance they might be seen by an underage child.

What SB3 actually represents is a serious overhaul of rights—most prominently, the rights of members of the LGBTQIA+ community who either perform in drag shows or seek them out as a way to find solace with other queer individuals. Any public performance deemed as ‘adult cabaret’ would be illegal and repeat offenders would be charged with a felony.

SB1, on the other hand, is a clear extension of the exhaustive anti-trans legislation that has begun to appear throughout the US. Under the new proposed bill in Tennessee, medical interventions or procedures altering a child’s hormones or affirming their gender would be illegal. If violated, the penalty against health care providers could amount to $25,000.

2021 was a record-breaking year in regard to anti-trans legislation across the country. Xtra, an LGBTQIA+-focused publication, reported that across the US, 37 states introduced 144 bills, and 18 of them became law.

What seems to be a recurrence in a number of anti-trans laws is the heavy presence of vague or unspecific language. This repeated lack of specificity allows lawmakers to have greater personal influence and sway over enforcement, and it makes challenging them far more difficult.

In a similar vein, the recent SB3 legislation follows a series of anti-drag proposals set forth by Republican officials over the summer of 2022. Most notably, in June, Texas lawmakers introduced legislation that bans minors from attending drag shows. NBC reported that Republican representative Bryan Slaton introduced a bill to ban minors from attending drag shows, as a way to ‘shield’ the children from what he described as “perverted adults.”

A number of Republican officials have persistently tried to condone drag shows as immoral, insisting that their goal is to sexualise children. These politicians—mostly men—have often been tag-teamed by far-right Christian groups who push similar rhetoric. For example, the Idaho Family Policy Center (IFPC) has told news outlets it plans to introduce a bill in January 2023 which will invoke a blanket ban on drag performances, which it has deemed as “vile sexual exhibitions.”

Of course, not only are these lawmakers misrepresenting drag in all of its forms, they’re also misunderstanding the purpose behind drag culture—which has been around since the 19th century.

Drag Queen Trixie Mattel, aka netizens’ favourite high-functioning makeup guru and comedy queen, explained the history of drag in a feature for Them and noted how drag was initially used by gay men to play with gender and express themselves in new ways. However, in the present day, it’s become an art form—still rooted in queer culture—where people can celebrate diversity, creativity and self-expression.

Another recent drag programme which has been under attack is Drag Queen Story Hour: a session where drag queen performers read children’s books to young audiences and their families. The books that are read sometimes also feature LGBTQIA+ characters. The events—usually hosted at public libraries and bookshops—are typically aimed at children aged between three and 11.

As reported by GAY TIMES, these story times have also been highly condemned by US lawmakers. Much of the criticism lies in a persistent trend among conservatives of linking homophobia to paedophilia.

However, a number of parents have come to the defence of the story hour, with one mother stating, “I feel it’s important for my little girl to meet lots of different people in life and have a really good understanding of diversity. There is no adult content in any performance, children love them because they are enthusiastic.”

In fact, what many people seem to forget is that there are a number of drag queens whose content is solely for children. Just as you would not take your child to an adult burlesque show or a very explicit comedy act, the same applies here. Drag is not binary, there is a spectrum of performers who cater to different audiences.

Matthew Cavan, who reads stories to children in Belfast as drag queen Cherri Ontop, spoke to The Guardian about the core reasons behind doing these events: “I have these children for an hour. I’m not going to try to tackle gender identity issues. My aim is just to give them little bits of information to try to make their world a bit brighter. I tell them that, growing up, I was considered very different, but now I get to wear what I want—and look at how fabulous I am! I let them know that being different is really cool, and so is being normal… And we can live in society together.”