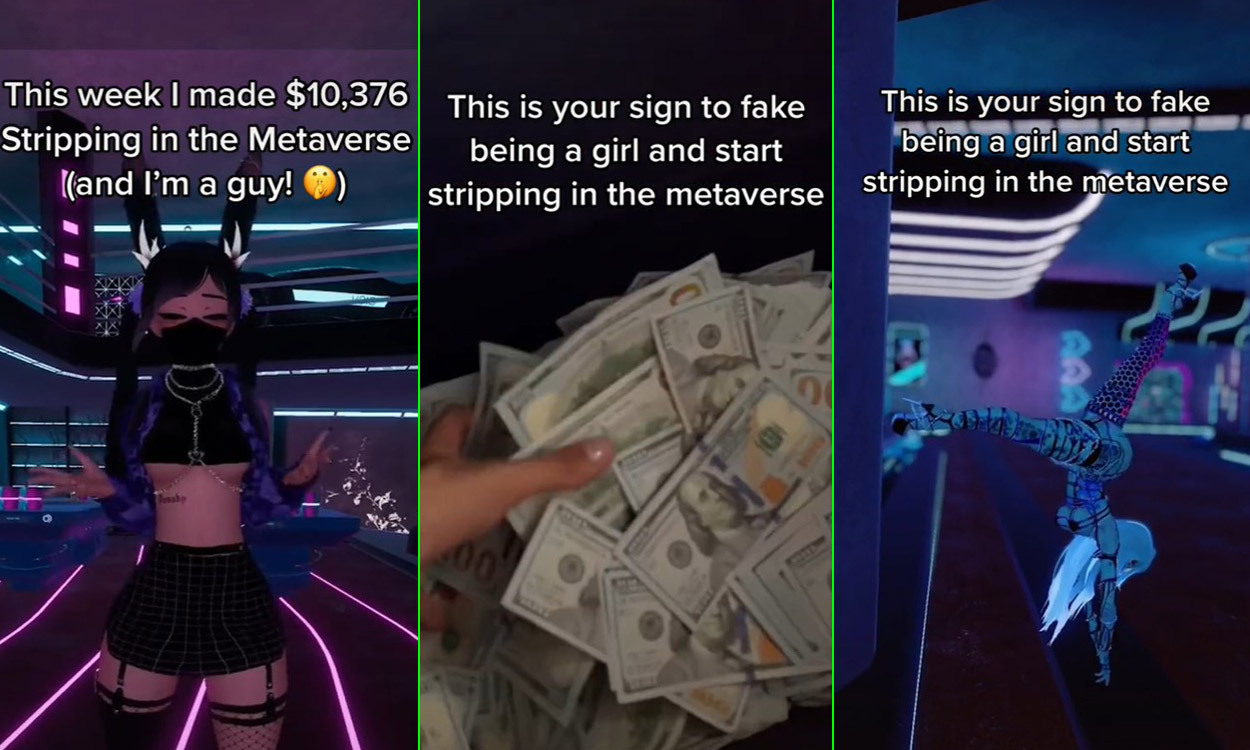 People are making $10,000 a week by stripping in the metaverse, viral TikTok claims

Darkened rooms, fluorescent pink lighting, and glitchy avatars with face masks and harnesses: this is the secret Krabby Patty-esque formula for earning exactly $12,000 a week and $42,637 a month by—drum roll, please—stripping in the metaverse.

At least that’s what a viral series of TikTok videos claim, with more than six million views and counting on some popular clips. Captioned with the wild variants of “This could be the new wave” and “You need to be on this wave,” the videos feature multiple digital avatars twerking in a club as it then cuts to a montage of cash-counting machines and luxury sports cars parked in garages.

“This is your sign to fake being a girl and start stripping in the metaverse,” the videos go on to read, seemingly targeted to young male users on the app who want to make a quick boyboss buck in the digital world hinged on anonymity.

Now, I’d said ‘Get the bag, king!’ if these claims were actually real—provided the VR user is of legal age. But, as it turns out, the series of TikToks is yet another NFT scam on the platform. Who’d have thought, huh?

With a total of five videos about metaverse stripping on the TikToker’s profile, it’s no surprise to see a number of users querying the creator about the supposed side hustle. “It’s giving Black Mirror (but fr where do I sign up),” a user commented. “Please I want to join, I would deadass do this,” another wrote. Upon closer inspection, all of these curious questions are met with customised variations of the same response: “Join my Discord. It’s got the sauce bro.” So I did.

Well, well, well. With an alleged member count of 59,590, the Discord server is all about a collection of 5,050 NFTs on the Ethereum blockchain—set to be minted mid-October. After spending five minutes on the general channel, I was not surprised but disappointed to see tons of desperate users threatening the moderators for scamming them with the promise of virtual bump and grind dolla dolla bills.

With comments along the lines of “Okay, where can I learn about the stripping?” and “I need the money, TELL ME FFS,” the general chat seems to be filled with people redirected from TikTok. But what’s noteworthy here is that the moderators take their time to address each attack by stating: “The stripping TikTok was satire, although making money in the metaverse is real.” They then urge the users to read up on what an NFT is and how they can make money by selling their own.

A noble purpose, I’ll give them that from the nosebleed section of ethical acknowledgements. But while the marketing strategy has proven effective for the NFT group, the entire discourse about sex in the metaverse can’t be left unaddressed.

Earlier this year, a female psychotherapist spoke out after being ‘gang raped’ on the platform owned by Facebook, apologies, Meta. “Within 60 seconds of joining—I was verbally and sexually harassed—3-4 male avatars, with male voices, essentially, but virtually gang-raped my avatar and took photos—as I tried to get away they yelled—‘don’t pretend you didn’t love it’ and ‘go rub yourself off to the photo’,” the woman wrote in a Medium post.

In May, another female researcher saw her virtual avatar raped within just an hour of donning her Oculus virtual reality (VR) headset while studying the behaviour of Meta’s Horizon World users.

Propagating false narratives about profitable side hustles on gen Z-first platforms like TikTok not only encourages the demographic to check the platforms out themselves, but it also puts them at direct risk of having such harmful experiences. Because let’s face it, several VR platforms and open worlds are still far off from implementing concrete laws to safeguard women on digital platforms.

Previously, a BBC News researcher posing as a 13-year-old girl witnessed grooming, sexual material, racist insults and a rape threat in a VR space—where she was also allegedly shown sex toys and condoms, and approached by numerous adult men. Following the investigation, the NSPCC (National Society for the Prevention of Cruelty to Children) said improvements in online safety are a matter of urgency.

“It’s children being exposed to entirely inappropriate, really incredibly harmful experiences,” Mr Burrows from the NSPCC told the BBC. “This is a product that is dangerous by design, because of oversight and neglect. We are seeing products rolled out without any suggestion that safety has been considered.”

In the past, several strip clubs have also popped up on the ‘kid-friendly’ gaming site, Roblox—where users were reportedly earning Robux, in-game currency, to give virtual lap dances to underage children.

I mean, if all of these harrowing accounts don’t rightfully raise your eyebrows about the downsides of VR platforms like the metaverse, I don’t know what will. And if this is what the world is coming to in the name of ‘progress’, stop the rollercoaster, I want to get off.

After rape in the metaverse, people are debating if online teabagging is sexual assault

In December 2021, a female researcher claimed that she was “gang raped” in Facebook’s metaverse. “Within 60 seconds of joining—I was verbally and sexually harassed—3-4 male avatars, with male voices, essentially, but virtually gang-raped my avatar and took photos—as I tried to get away they yelled—‘don’t pretend you didn’t love it’ and ‘go rub yourself off to the photo’,” she wrote in a Medium post. Five months later, another female researcher witnessed her virtual avatar raped within just an hour of donning her Oculus virtual reality (VR) headset.

Now, as the VR industry is finally having a reckoning over toxic cultures of sexual harassment, a decade-old in-game display of dominance is making a comeback among the discourse it has gathered online. Yes, we’re talking about teabagging, briefly known as “corpse humping,” and the sexually-suggestive history of gamer taunts.

For the uninitiated, ‘teabagging’ refers to “the act of a man inserting his scrotum in another person’s mouth, in a similar motion as when a tea bag is juiced into a mug.” Brazenly-put, it is the hallmark practice of crouching over a fallen opponent and “rubbing your cyber-balls across his digitised forehead.” If you still haven’t perfected the mental image, here are some live visuals:

Although it’s impossible to trace teabagging to a specific player or group of players, it is assumed that the practice began somewhere around the era of Quake or Counter-Strike back in 1999. That being said, however, teabagging truly gripped the gaming community only after the release of Halo: Combat Evolved in 2001.

Nearly 21 years after it gathered traction as a universal gamer taunt, netizens across the world are once again debating whether the practice “counts as sexual assault” or not. The discourse was revived after screenshots of a Discord conversation went viral on Twitter.

“Yep and then we get into games where people think it’s okay to tbag and that it’s funny, when really it’s sexual assault. Ugh we live in a gross world, I just want to beautify it,” the first message reads. Another user is seen replying and stating, “If tbagging is sexual assault then I’m a repeated sex offender.” An average Discord conversation, if you ask me.

Meanwhile, another reply read, “I mean it is sexual assault. If I do not consent and someone rubs their genitals in my face that’s sexual assault. I wouldn’t be proud of being a repeat offender. You may think it’s just a video game. Well, I grew up with a large crowd of boys who did that for fun, all the time to other people irl. It’s not funny. It’s disgusting.”

The concerns were also echoed on Reddit as a user shared screenshots of a Tweet that read, “Imagine saying that because you won a round, it is okay to teabag someone’s corpse in-game. It’s not. Unless there’s express consent from everyone, including those who would have to watch it. It’s sexual harrasment and it has to end.” A quick scroll through the comment section under the post essentially features the same argument: if teabagging is sexual assault then killing another character in a game is murder.

Meanwhile, other users highlighted how likening the practice to sexual harassment is actually “an insult to actual victims.” “As someone who was a victim of r-word, teabagging in a video game is not sexual assault. Please do not speak from our behalf if you did not go through the same stuff,” a Twitter user wrote in this regard.

Now, it’s worth noting that teabagging was once even banned from a Killer Instinct tournament back in 2017. The female equivalent of the controversial act is also known as “clam clamming.” While teabagging is immature and signifies poor taste, I’d like to highlight how context matters for such practice in gamer culture.

For example, if your opponent has hacked or cheated their way to victory, perhaps a fleeting moment of teabagging is acceptable. But when three or four players gang up and track an opponent down specifically to teabag their digital avatar, that’s toxic. This doesn’t honour the team’s skill. Rather, it’s a display of hostility above all else.

Though rooted in controversy, teabagging has become an integral part of gamer culture and is ultimately here to stay. But not all hope is lost for those who believe the practice needs to be eradicated altogether. In Destiny 2, players once requested its developers to create a teabag emote. Now, the emote in question wasn’t of someone actually teabagging another player but users suggested that it should show one dunking a tea packet into a cup of hot water—a metaphor of sorts.

While the developers never did give players such a spot-on visual, they did offer the ‘Cup of Tea’ emote, which shows a player preparing a cup of tea and drinking it. It was a lighthearted way to convey the meaning of the teabagging—minus all the borderline-traumatic visuals.