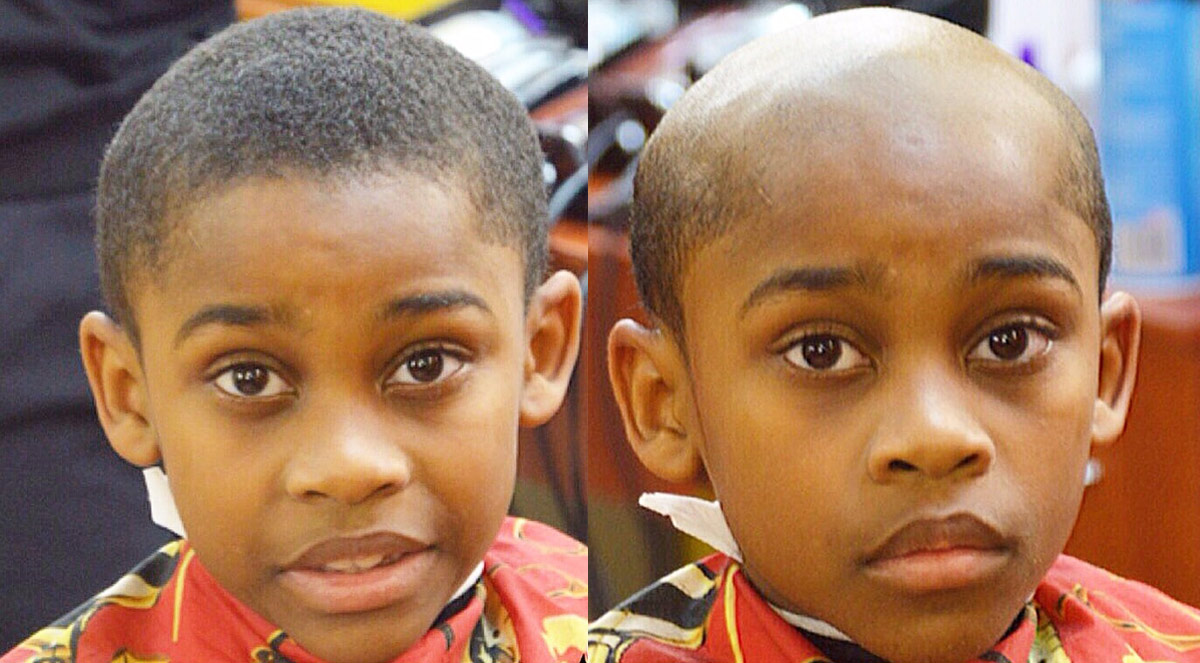 Are your kids acting too ‘grown up’ for their age? Do you think they need a more radical approach—apart from extra chores and reduced screen time—to be disciplined? If so, an Atlanta-based barbershop has got you covered.

Three days a week, parents can take their misbehaving kids to A-1 Kutz in Snellville and ask for the “Benjamin Button Special”—a haircut specifically designed to teach your kids a lesson. How, you ask? For starters, visualise your child walking to school looking like a balding senior citizen.

The haircut, designed by Russell Fredrick and his team of barbers, involves shaving a child’s crown—just enough to resemble a receding hairline. Dubbed as the perfect punishment for obnoxious kids, the Benjamin Button Special invites adolescent humiliation that stems from unwanted attention and teasing classmates. Who’s the grown up now, huh?

Ever since its conception, the haircut has been proven effective in wiping smirks off children’s faces. I mean, just look at this boy’s before and after pictures of getting the haircut:

Gathering supporters worldwide, Fredrick initially advertised the haircut after he used the novel disciplinary measure on his 12-year-old son, Rushawn. “So u wanna act grown… well now u look grown too👴,” the Instagram post read and quickly went viral on the platform. The verdict? Rushawn’s grades, which were at an all-time low, “dramatically skyrocketed” after the Benjamin Button Special. Say what?

According to Fredrick, the haircut witnessed an influx of positive responses. “There are a few people that are saying it’s emotional abuse. But on average, everyone is applauding the mother that brought the child in—and applauding me as well,” he told The Washington Post.

The expert also highlighted how this reception may have stemmed from parents increasingly reevaluating their means of discipline in their households. “Parents are at a loss,” he said. “When you go to discipline kids these days, they can’t necessarily use physical punishment the way parents did in the past, but they have to do something. If you don’t, and your kid ends up doing something crazy, everyone is going to say the problems started at home.”

As someone who was brought up in an Asian household, I can’t help but agree with that statement. But does the use of public humiliation as a disciplinary tool actually work? According to Xanthia Bianca Johnson, a psychotherapist who works closely with adolescents and families, this method is often counterproductive.

“There’s lots of research that supports the fact that when a child is blamed or shamed—it triggers their nervous system, and when the nervous system is shut down, it is directly connected to the brain,” she said. “The part of the brain that processes logic gets shut off and it can actually stunt physical and emotional growth.”

Wanda Wheeler, a clinical social worker further explained how humiliation-based actions are nothing new. “Consider dunce hats and parents who came to school to spank their children in front of classmates,” she said in the same interview. However, Wheeler also highlighted how children often lack the self-esteem to brush aside embarrassing situations.

“It may have a temporary effect that results in changes in behaviour, but there could also be a deeper or more lasting effect on the child’s self image,” she explained.

On the other end of this narrative, we have Willie Jefferson, a father of two who shaved his 11-year-old son’s head after he misbehaved in class, and the mother of the 10-year-old boy from the picture earlier. For Jefferson, the threat of public humiliation was so effective that his son was on good behaviour several months after he was given the bald patch. “Shaming isn’t bad for children if it teaches respect,” he said. “It taught me respect, it taught my parents respect, it taught my grandparents and great grandparents respect, and that’s what I’m going to stick with.”

As for the boy who was robbed of his smirk earlier, his mother told Fredrick that he had learned his lesson after four days of embarrassment. Heck, he even started calling himself “old man Jenkins” at one point.

“He understood why it happened and he rolled with it and allowed it to make him stronger,” Fredrick said. “You gotta reach these kids somehow, and I would gladly do it again.” At the same time, the pioneer warned how the cut should only be used as a last resort.

“I hope that most people won’t have to do this unless it’s an extreme circumstance and nothing else is working,” Frederick advised. “First, you talk or implement your restrictions. But when the conventional ways don’t work these days, you have to get creative.”

Before we call it a day, did we mention that Frederick and his team are offering this service free of charge? Brad Pitt must be lowkey proud that his work in the 2008 film The Curious Case of Benjamin Button is now being used as a novel tool for misbehaving children, am I right? 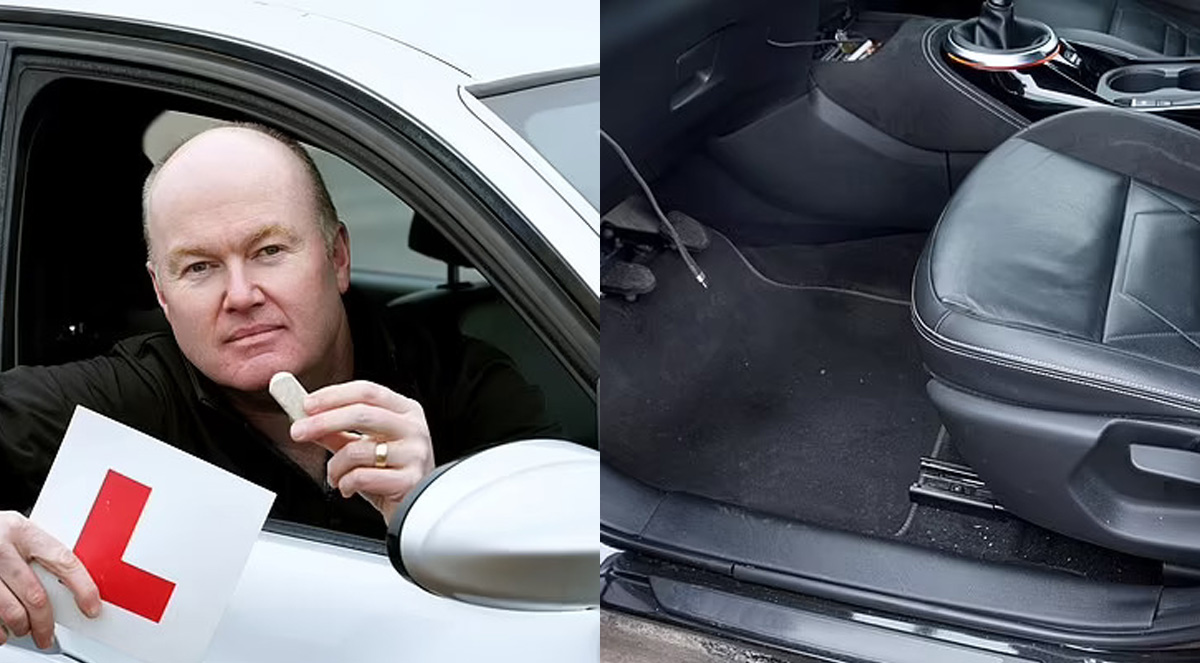 Teen fails driving test because the car was TOO DIRTY

We all know how nerve-racking driving tests are. The 40-minute preview of our skills—including an eyesight check, vehicle safety questions, reversing and general driving test—is a legal rite of passage for most teenagers entering adulthood. Lately, however, there’s an undesirable factor that examiners are looking into and rejecting drivers for before they even start their engines: dirty cars.

One such teenager was left distraught after an examiner failed her for having tiny pencil rubber filings on the carpet underneath the passenger seat. Spoiler alert: she was driving her instructor’s car!

After the examiner refused to get in the vehicle, the instructor asked for a second opinion—which was blatantly refused. The 17-year-old, who had been waiting months to take the test, now fears to sit behind the wheel ever since the incident took place at the Blackpool Test Centre.

“It was the instructor’s car and it was spotless apart from a few tiny bits of rubber from when the instructor had rubbed something out of his diary,” Paul Turner, the 17-year-old’s father from Saint Michaels on Wyre, said—as noted by the Daily Mail. “The filings weren’t on the seat or anywhere where the examiner would be sitting. It wasn’t like there were crisp packets and empty tins everywhere, it’s ridiculous.”

According to Turner, the examiner and her instructor spent around ten minutes trying to sort things out, but got nowhere. “So she failed without even driving the car and there’s no way of getting the money back,” he admitted, adding how his daughter was “in floods of tears.”

“I can’t see a reason why he couldn’t get into the car,” he continued. “At the end of the day, these people are civil servants and they need to be accountable.”

Given the delays caused by the COVID-19 pandemic, it currently costs £64 to take a practical driving test in the UK—with a four to five months waiting list for drivers. Theory tests taken before the practical ones also expire after two years, further adding to the pressure faced by those stuck on the list.

Things are further complicated for the 17-year-old in question. “We live in a rural community, we don’t have buses…” Turner said, explaining that his daughter will be graduating soon and a failed driving test will hinder her job prospects. “Not only that, but this is one of the most nerve-racking things a teenager does. It’s one of those stand-out moments in your life and this has just made it worse.”

The Daily Mail also noted how dozens of other drivers have mentioned their tests being declined over new hygiene standards—implemented as a new COVID-busting bid by the Driver and Vehicles Standards Agency (DVSA). On these terms, one Norwich driver failed the test due to mud in the footwell of their car while others were rejected over blades of grass and even strands of hair.

A quick scroll through the Google reviews on Blackpool Test Centre also reveals how three others have failed because of “picky” examiners finding fault with cleanliness. One user, who had followed the guidance for COVID cleaning, highlighted how an examiner still refused to take her son-in-law for the practical test.

“Not sure what he was planning on doing on the floor of the back of the car where he’d spotted a couple of small hairs,” the user wrote. “All surfaces were clean & no rubbish or unnecessary items anywhere as was recommended!!”

When the Daily Mail reached out to DVSA, the organisation refused to comment on individual cases and hesitated to state if the examiners were being investigated or not. However, a spokesperson outlined that DVSA’s priority is to “protect our customers and staff and stop the spread of COVID-19.”

“Guidance has been issued that cars used on driving tests must be cleaned before the test to lessen the chance of infection. Driving tests will not go ahead if this has not been followed to ensure public safety,” they explained. “The guidance for people wishing to take a test is that you must clear and clean the inside of your car before your test.”

That being said, the new measures evidently lack proper specifications as to what deems vehicles ‘dirty’ and ‘infection-prone’. The fact that these allegations are raised at a time when there is a backlog of people wanting to take their tests does not help its case either.