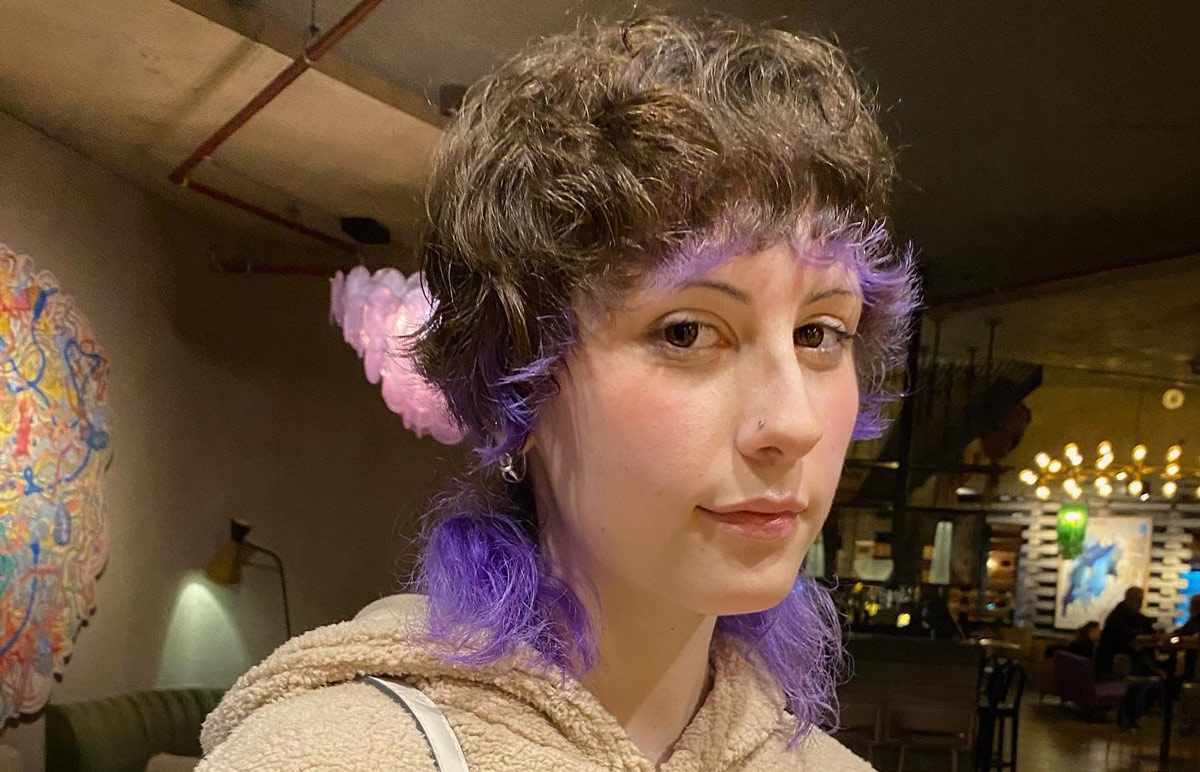 Introducing the jellyfish haircut, a gender-neutral style making waves on TikTok one layer at a time

If you’re a millennial or a gen Zer, chances are that your pop culture palette in 2010 was entirely based around the family martial arts drama, The Karate Kid—that year’s version, not the 1984 one, duh. Though the film featured stars like Jaden Smith, Taraji P. Henson and Jackie Chan in lead roles, a character that really resonated with fans was none other than the violin-fiddling and Bach-loving Meiying (played by Wenwen Han).

At the time, many enthusiasts were floored by Meiying’s offbeat haircut, which they termed the ‘half-long half-short’ look. Fast forward to 2022, TikTok’s latest pitstop to mulletville is an anthropomorphic style inspired by its tapering cousin from the 2010s. With 4.8 million views on the platform comes the jellyfish haircut in all of its edgy glory.

At first glance, it’s easy to sum up the style as a “removable cap.” In fact, when the haircut gripped Instagram back in 2018, many users were quick to dub it “a mess” that was executed by “a two-year-old with Crayola scissors.” But just like gen Z’s obsession with most visual styles like the wolf cut, the jellyfish haircut has more to it than meets the eye. Let me explain.

What is the jellyfish haircut?

At its core, the jellyfish haircut splits your hair into two horizontal segments. “On the basis of long hair, it’s divided into upper and lower parts or the outer and inner layer,” explained Quan, a hair designer based in Canberra, Australia. “The outer layer is usually a strong line shape sitting either above or slightly below the chin. On the other hand, the inner part is usually longer and layered—creating more contrast in length and texture to the outer layer.”

According to Quan, the jellyfish haircut is tailored for those who are bored of having long hair but are also reluctant to chop it short. “In terms of appearance, I think jellyfish hair does not fit into any beauty standard—it’s a gender-neutral style and is designed for open-minded people,” he added.

In order to retrace the evolution of the eccentric hairstyle, I turned to its visually-similar (or so I thought) counterparts: mullets, shags and wolf cuts. When I equated the three to the anthropomorphic style in question, Quan started by noting a few overlapping reasons for the popularity of these haircuts.

“Mullet, shag, wolf cut and jellyfish styles are really edgy, fun and versatile due to the contrast in length and texture. Having these sorts of hairstyles will give you more options when it comes to styling,” he said. At the same time, however, the designer highlighted how the cuts have loads of differences that people don’t seem to be aware of.

“Shag cut emphasises more on the connection between the bangs and the front layers,” he explained. “Wolf cut is a slightly more extreme version of the shag—emphasising the disconnection with defined sideburns. Mullet, on the other hand, has the most extreme disconnection between the sides (short) and back (long).” If you’re having a hard time forming mental images of the differences, here are some visuals to aid the process:

Quan then went on to note how there are different versions of jellyfish hair, all depending on its length and styling choices. “Long-haired jellyfish allows clients to unlock new styles every day. The longer, inner layer can be worn straight and smooth, usually with creative hair colours for a stronger look. Clients can also braid the longer part into two strands with different hair accessories such as hair clips and butterfly pins.”

On TikTok, several enthusiasts can also be seen spicing up their jellyfish hair with bubble braids and heart pigtails and even embellishing them with hair tinsels. The possibilities are endless with this one and every tutorial on the platform is bound to initiate you further into the ‘Jelly club’.

Now, if you’ve already stumbled down the #jellyfishhaircut rabbit hole on TikTok before, then you’ll notice how most of the tutorials and GRWM’s feature long hair. It almost leaves us short Lord Farquaad-ians out of the loop. But not all hope is lost. Presenting: the underrepresented style of the short jellyfish.

According to Quan, the shorter version of jellyfish hair can be tricky to cut as the two layers would essentially blend together in this case. “However, from my experience, I do think jellyfish hair should have severe disconnection in length and texture—so the photo below shows how to achieve the disconnection with shorter length by going for a blunter or shorter fringe layer.”

A visual tale of anthropomorphic hairstyles

In January 2022, Pinterest forecasted that searches for ‘octopus haircut’ would double over the course of the year. “While 2021 was the year of more modest trims and shades, our data indicates that people are going to be adopting a much more rebellious and fun approach in 2022, as creativity and escapism become more important in every aspect of our lives, including our hair,” Tom Spratt, head of beauty at Pinterest, told Stylist.

“Get ready to see unusual cuts, ranging from ‘mullet hairstyles’, to even ‘octopus haircut’ amongst the hard-to-miss styles most requested at the salons, with searches for each increasing by 190 per cent and two times respectively.”

Characterised by disconnected layers and subtle 2006 MySpace energy, the octopus cut quickly turned into an obsession for TikTok—peaking in April and pacing steadier than most styles with 22.3 million views on the platform today. When I queried Quan about the similarities between the octopus cut and jellyfish hair, he said, “According to my research, people equate octopus hair to choppy, visible layers that almost look like tentacles. The haircut is long, which differentiates it from other edgy styles—but it’s more top-heavy, with wispy, angled pieces cascading down your shoulder.”

Quan continued by quoting celebrity hairstylist and Aloxxi brand ambassador Leonardo Rocco who previously stated, “The octopus haircut is a mix between the shaggy and mullet styles, and is characterised by having a lot of volume on the top and a lot of layers throughout the hair. The outer edges should be soft—preferably cut with a razor to create the effect of octopus tentacles.”

“I do agree with this and I think octopus hair is just a different variation of a shag cut,” Quan said. “It does share similarities with jellyfish hair which is top-heavy and lighter towards the bottom. However, in my opinion, jellyfish hair is completely different from octopus hair as it is outside of the shag or mullet variation.”

Now onto the mushy elephant in the room. Given how actual jellyfishes are the epitome of smooth and ‘silky’ finishes, does hair texture affect the way a jellyfish cut turns out? “The jellyfish hair is still quite picky,” Quan explained, outlining how texture ultimately affects the end result of the look.

“The density and texture of the hair should be on the medium side. If your hair is naturally straight and heavy, you might want to have the right stylist who cuts hair technically—so they are able to choose the right shape for your hair and control the weight of the top and bottom layers. Ideally, you want the top layer to be stronger and sharper without looking super heavy. Whereas, the bottom layer would be slightly lighter and more textured to achieve the image of the jellyfish.”

If your hair is naturally curly, on the other hand, the expert mentioned that the process can be tricky—given how the wispier texture can make it harder to achieve the sharp look with the top layer. “However, it can be done with the right understanding of shapes and styling choices (your hair can be straightened if needed),” Quan continued. “The lower layer is not an issue as it is quite good to have curls at the bottom to create more movements and fluid feeling of the jellyfish. Wispier or choppier fringe layers can also be helpful if you have a rounder face shape.”

Talking about face shapes, Quan further highlighted how people with rounder faces should be careful with this style as it might end up making their face ‘heavy’ if the weight line of the top layer is not placed and positioned correctly.

“The weight line should not be on the same level with your chin area as it will create more of the heavier feeling on your face—making it even rounder,” he explained. “Instead, the line should be either above the chin a bit or longer than the chin area.”

At the same time, however, Quan reiterated his beliefs that jellyfish hair is a statement piece that is not created for everyone to like in the first place. “It’s either super cool or super ugly and nothing in between. It’s the style that you either super love or super hate. Therefore, regardless of whatever rules I mentioned above, if you think you have the confidence to wear it, that’s all that matters.”

Still afraid to make the commitment?

A quick scroll through the comments section of JellyHairTok is enough to sketch out the fence many are sitting on when it comes to the gender-neutral style. “My curly hair could never” and “My social anxiety said no” are some of the most common claims on the platform. So like with all trends covered here at SCREENSHOT, I asked the expert himself for some advice on how to fearlessly nail the style in question.

“Jellyfish hair is loud and fun so you need to have the confidence and the willingness to be judged by other people,” Quan admitted.

“The maintenance part is not too bad in my opinion. Obviously, the upper part will need to be trimmed when it gets to a certain length because the length is what determines the whole look of your face,” he continued. However, the designer also divulged a hack if you don’t want to head to the salon often: simply tuck the top layer behind your ears! “It still looks super cool!” Quan summed up.

So what are you waiting for? If you’re going to get a haircut in 2022, you might as well go all in. And the best part about jellyfish hair is that you can always chop off the bottom layer in case the style does not resonate with your soul. You should be good as long as you don’t do it in a dingy dorm bathroom at 3 am.