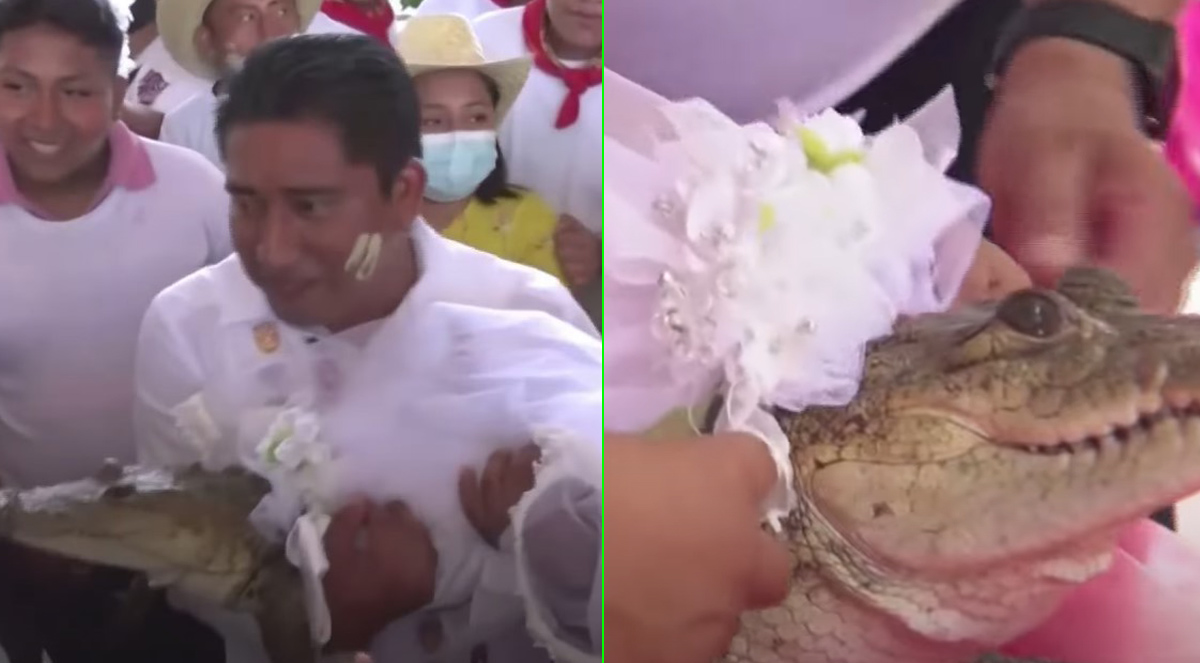 On 30 June 2022, the mayor of a small Mexican town tied the knot with his alligator bride in a ritual that dates back to pre-Hispanic times.

The symbolic ceremony took place in San Pedro Huamelula, a town located in the southwestern state of Oaxaca on Mexico’s Pacific Coast, where mayor Victor Hugo Sosa wed the seven-year-old alligator who was clothed in a white wedding dress with many local residents in attendance.

As trumpets blared during the colourful procession, locals carried the bride in their arms and fanned her with their hats—while urging the indigenous leader to seal the nuptials with a kiss.

Hugo Sosa obliged more than once, bending to plant his lips on the reptile’s snout, which was tied shut to avoid unwanted biting. Residents were also seen dancing alongside the bride as traditional music rang through the town’s streets.

The alligator marriage ritual, which takes place in San Pedro Huamelula every year, originated with the state’s Chontal and Huave indigenous communities. The ceremony blends indigenous traditions with Catholic spirituality.

The seven-year-old reptile, referred to as ‘little princess’, is believed to be a deity representing Mother Earth. Thereby, her marriage to the local leader symbolises the joining of humans with the divine—in the ultimate hopes of bringing prosperity to the community.

“We ask nature for enough rain, for enough food, that we have fish in the river,” Hugo Sosa said, as reported by Reuters. Elia Edith Aguilar, known as the godmother of the alligator who organised the wedding, also told the publication that she spent a lot of time fretting over what the bride would wear for the ceremony. “It gives me so much happiness and makes me proud of my roots,” she continued. “It’s a very beautiful tradition.”

This is not the only instance where humans have married animals as part of ritualistic traditions. In 2014, the Daily Mail reported about an 18-year-old girl hailing from the Indian state of Jharkhand who married a stray dog to ward off an evil spell.

The wedding was hastily organised by village elders after a local guru led the girl’s parents to believe that she possessed ill-luck and that marrying a man would bring destruction to the family and her community. According to beliefs, the marriage will not affect the bride’s life and she will be free to marry again later without divorcing the dog. “Many weddings like this have taken place in our village and also the other neighbouring villages. This is a custom that we thoroughly believe in,” the girl’s father told the publication at the time.