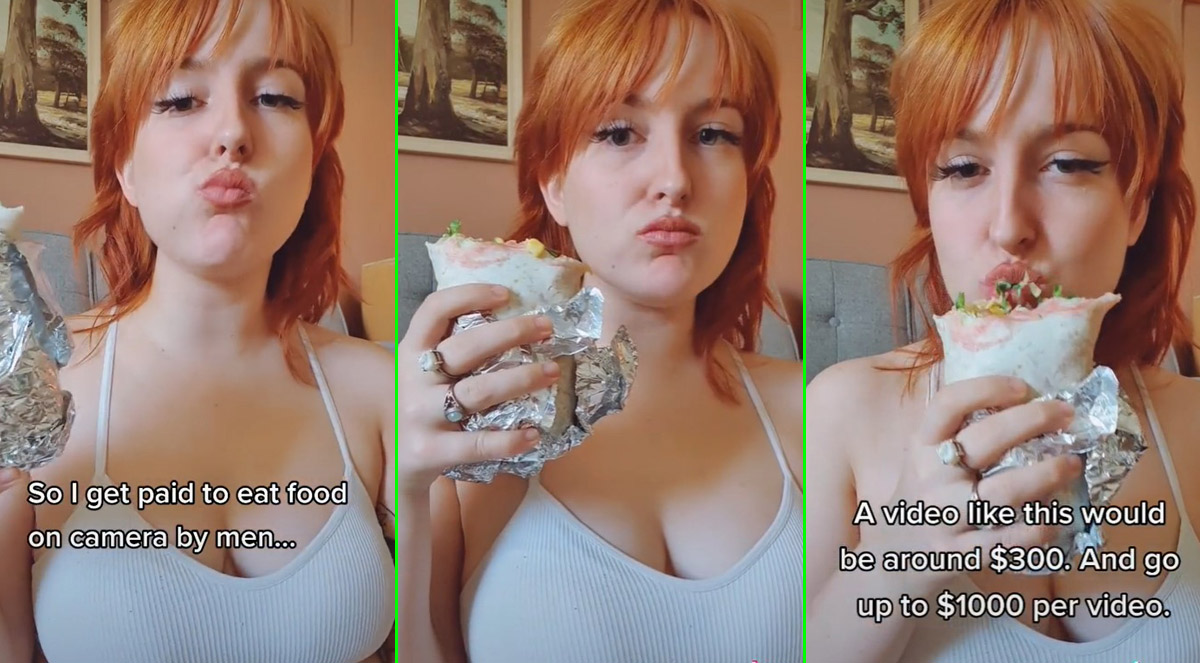 Woman who makes $1,000 to eat food for men on camera says there’s one thing she won’t do

Earlier this year, reality TV star Stephanie Matto made headlines when she was allegedly sent to the emergency room (ER) after pumping out multiple jars-worth of farts to cope up with the skyrocketing demand for her flatulence. Although there has been a discourse surrounding the authenticity of her story, Matto managed to make around $200,000 off her Mason jars and paved the way for the internet to discover more creators who were catering to unique requests around the world.

Australia-based TikToker Rosie Zeppelin is one such creator who makes hundreds of dollars just by filming herself eating food for her male fans. “So I get paid to eat food on camera by men. I know, dream job, right?” Zeppelin is heard saying in a TikTok video, which currently stands at 1.7 million views.

According to the creator, one of the most common requests she gets is for her lipstick to smear all over the food and her face while she’s eating. Some of her fans also love it when she defies table manners and eats messily so that the food falls out of her mouth—a fetish called sploshing, to be exact. “The second most popular thing would be talking videos and pretending that we’re in the same room together,” Zeppelin continued.

This subgenre essentially incorporates roleplay, where the creator pretends she’s seated at a table for two and talks to the camera as though the viewer is in the room with her.

Now, the more work that goes into making the clip, the higher the price. “A video like this would be around $300. I do film myself eating from the beginning to the end,” Zeppelin explained. “My videos also tend to go up to $1,000 in price if I have to prep a meal, if it’s a big meal [or] if I don’t really like the food—it all differs.”

However, there is one request that’s a bit too meaty for Zeppelin to chew. “I’m vegetarian and I’ve been offered to eat meat on camera for over $2,500,” she mentioned, adding how she had to decline the lucrative offer.

At the same time, however, the creator is not entirely against the idea. “I think it’s going to cost about $7,000 plus for me to actually do that,” she added.

Shortly after the video went viral on the platform, several users admitted how they regret mindlessly scrolling through TikTok during their lunch breaks. “And I’m out here stuffing myself with food for free?” a user wrote, while another queried, “How did you start this? I found a new calling for myself. I talk to myself while eating all the time anyways 😅”

While a portion of users asked Zeppelin to share tips and tricks on how to nail the side hustle in question, others admitted to merely feeling hungry after watching her TikTok video. “What are you eating? It looks delicious,” a user commented. 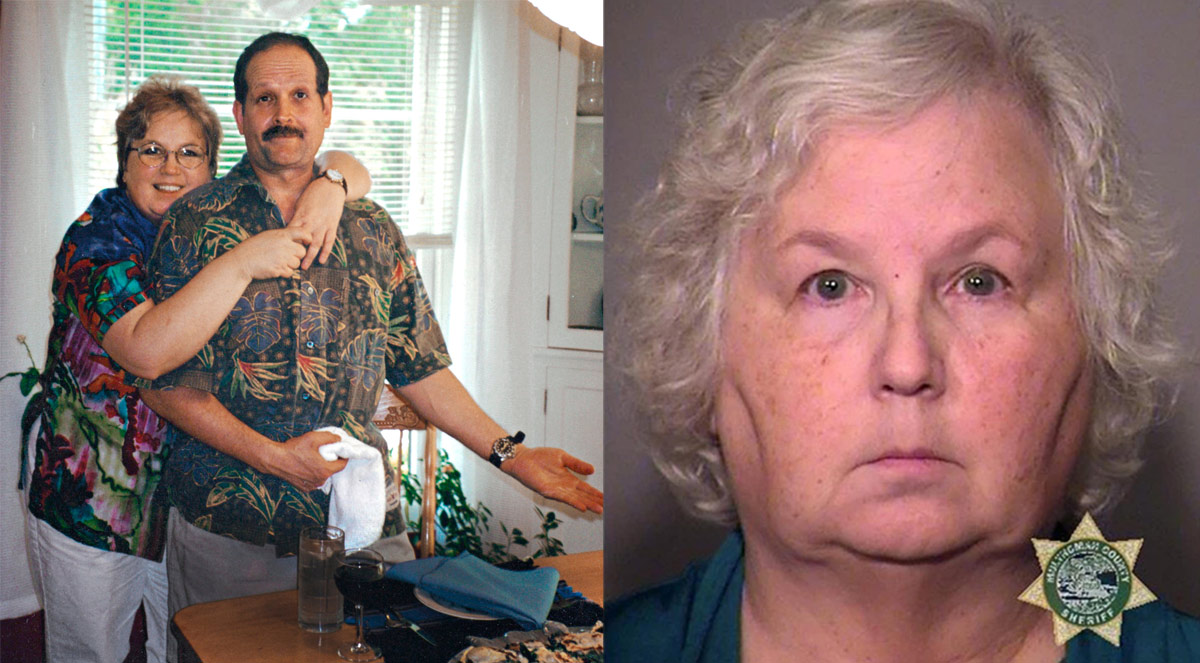 In 2011, Oregon-based romance novelist Nancy Crampton Brophy penned a guest post on a writer’s blog titled How to Murder Your Husband. “As a romantic suspense writer, I spend a lot of time thinking about murder and, consequently, about police procedure,” Crampton Brophy wrote. “After all, if the murder is supposed to set me free, I certainly don’t want to spend any time in jail. And let me say clearly for the record, I don’t like jumpsuits and orange isn’t my color.” The 700-word piece was then split into sections detailing the pros and cons of “killing a villainous husband.”

Seven years later, on 2 June 2018, Crampton Brophy’s real-life husband, Dan Brophy, was filling buckets of ice and water at a sink to prepare for his day as an instructor at the Oregon Culinary Institute in Portland when he was shot in the back. After Brophy collapsed to the ground, he was shot again in the chest at close range. His body was later found in the classroom by his students.

While Brophy’s death gripped the Oregon culinary industry, nobody seemed more shocked than his wife. “For those of you who are close to me and feel this deserved a phone call, you are right, but I’m struggling to make sense of everything right now,” Crampton Brophy wrote on Facebook the day after his death.

But in a plot twist that only rivals her own books, Crampton Brophy was arrested three months later and charged with her husband’s murder. The self-published romance novelist is currently standing trial, which opened on Monday 4 April 2022 in Portland. While the tongue-in-cheek essay serves as a major red flag to investigators, the trial judge has deemed it inadmissible as evidence—on the grounds that it could unfairly prejudice the jury.

The prosecution has alleged that Crampton Brophy killed her husband to benefit from a $1.5 million life insurance policy. “[Crampton Brophy] executed what she perhaps believed to be the perfect plan,” Shawn Overstreet, Multnomah County Senior Deputy District Attorney, told the jury in the trial’s opening statements, as per The Oregonian. “All of the leads that detectives followed up with all pointed back at Nancy Brophy.”

While there were no cameras inside the institute where her husband was shot, prosecutors argued Crampton Brophy was seen driving a minivan around the area on surveillance footage. This activity was registered between 6:39 am and 7:28 am on the day of the killing—Brophy arrived at the institute at 7:20 am. The authorities further discovered that Crampton Brophy had researched ‘ghost guns’, unserialised firearms that can be bought online and assembled at home, and had purchased a 9mm pistol at a gun show before her husband’s death.

She then allegedly switched out the gun’s barrel with a Glock slide and barrel she had purchased on eBay, “thus being able to present a new, fully intact firearm to police that would not be a match to the shell casings that she left at the crime scene.”

Defence attorney Lisa Maxfield, however, countered this narrative—arguing that Crampton Brophy has made several purchases as part of her research work as a writer. “To support her writing, Miss Brophy has spent good money on night vision goggles, a telescope, law-enforcement-quality handcuffs, high-powered binoculars, art supplies, antique glass doorknobs, and lots and lots of locks,” Maxfield said. The defence attorney added that she would call at least two other writers as witnesses, one of whom bought “a giant crossbow” to back her writing, while the other, identified as Delilah, purchased a chastity belt for similar purposes.

While Crampton Brophy’s trial is expected to end in a few weeks, a new plot twist seems to have gripped the case. In a recent conversation with one of her cellmates, the How to Murder Your Husband author allegedly slipped up and confessed to the shooting by mistake.

“Miss Brophy held her arms apart, like a wingspan, and said, ‘I was this far away when the shooting happened’,” Overstreet stated, reiterating the comment Crampton Brophy made to her fellow inmate in court. The novelist then allegedly corrected herself and said that the shooting happened within a close range. The inmate, Andrea Jacobs, told detectives that Crampton Brophy seemed to be embarrassed after making the comment, and said their relationship became “very awkward.”

In How To Murder Your Husband, Crampton Brophy additionally listed five potential “motives” that might lead someone to kill their spouse. The first category was “Financial: Divorce is expensive, and do you really want to split your possessions?” Second read, “Lying: This is a crime of passion. In anger, you bash his head in or stab him with a kitchen knife.” This was followed by “fell in love with someone else,” “abuser” and “it’s your profession.”

She also gave readers “options” on what their murder weapon or technique should be. “Guns: loud, messy, require some skill. If it takes 10 shots for the sucker to die, either you have terrible aim or he’s on drugs,” she wrote. “Knives: really personal and up close. Blood everywhere. Eww.”