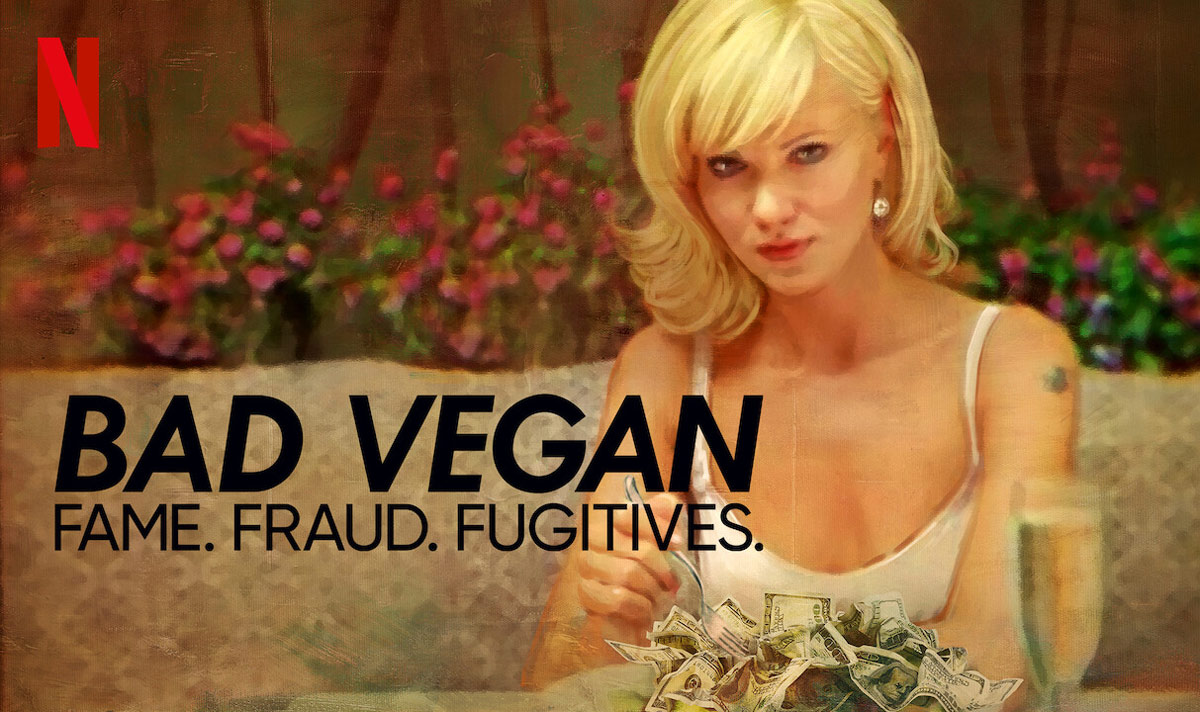 Despite hiking the prices up in the UK and Ireland for its streaming services this year and cracking down on sharing subscriptions among households, Netflix continues to keep us in its grasp. The leading platform in streaming pulls us back in for exciting new shows (both external and original) hosted on its site—be it with the world-stopping Top Boy’s fourth season or its true crime docuseries domination, we just can’t get enough. More recently, however, the platform has been witnessing the rise of an epidemic: scammer shows. Last week, Netflix’s latest foray into the world of crime kicked off with the drop of a documentary called Bad Vegan: Fame. Fraud. Fugitives which delves into the bizarre world of—you guessed it—food and fraud.

Yes, Netflix has seemingly struck gold with the advent of the scam and sham shows, but “all that glitters” comes to mind with this latest trend.

Before you plan to binge, Bad Vegan, for those of you that don’t know already, is a docuseries following former vegan queen Sarma Melngailis, an uber-successful restaurateur who lost it all to a scammer that swindled her out of millions—​​$2 milion (about £1.4 million) to be exact—in wire transfers alone. Her collapsing restaurant led to her scamming both investors as well as her own employees out of their paychecks in a bid to save herself from a total debt of over $6 million (£4.5 million), the docuseries detailed. Of course, it debuted with a 100 per cent perfect score on Rotten Tomatoes—what’s not to love about a juicy downfall, huh?

The four-part series following Melngailis’ fall from grace after meeting and marrying Anthony Strangis (who was actually married already) has had everyone hooked on it since its release on 16 March 2022. This comes across as no surprise, given how the show has all the good hallmarks of a hit-documentary in making: money, meat suits and a maddening story of a successful woman being taken advantage of by a leach scammer—who was introduced to her by none other than Alec Baldwin, of all people.

But Melngailis’ restaurant Pure Food and Wine was anything other than pure, as the documentary discovers. Evading spoilers—though everything I could say would make no sense to you, I mean, meat suits and dog immortality are involved—Bad Vegan dives deep into the ridiculous realm of vegan influencers. Attempting to make sense of Melngailis’ Instagram bio which reads: “Rikers alum. It’s a long story.”

But between this, The Tinder Swindler and Inventing Anna, Netflix’s niche in the scam show department has made us unable to tear our eyes away from any car crash they decide to televise. However, the show’s creator, Chris Smith, stands by his Bad Vegan baby. “Look, everything is shades of grey,” he said to The Guardian. “We tried to represent it as accurately as we could from the information we had through the documentation that was presented to us and through the interview,” the director continued.

Once Netflix found its goldmine of borderline-bonanza shows with Tiger King, it was hard for the platform to stray away from its tried-and-true formula of shows that shock and entice viewers to keep watching. Cosmopolitan noted that the masterminds behind Bad Vegan are actually responsible for other insanely viral shows like Tiger King and Fyre: The Greatest Party That Never Happened—which both score high on the batshit crazy-o-metre for your bingeing delight.

Last week, Radio Times questioned the machine speed at which Netflix pumps out these true crime shows, with Bad Vegan exposing the platform’s “bad habit.” The outlet commented that “turning a single Vanity Fair piece into four hours of television feels excessive” and the problem with the so-called “limited” shows is that they aren’t limited enough. They’re simply too long. Too much of a good thing—though I wouldn’t call the Joe Exotic two-season extravaganza and spin-off, The Doc Antle Story, good—does have its eventual downside.

But what if the problem is much bigger than that? Over-investment in celebrity lives has an impact on your brain and studies have proven that it could actually make you less intelligent. So what about true crime and the obsessions with a brutal backslide? Though meme-rich and endless avenues for spin-offs probably make the company wide-eyed and eager to cash in, the harm also becomes a greater threat. They additionally come at the expense of the very people starring in them and while I won’t defend Melngailis, a show about her should at least be a portrayal she somewhat agrees with. Though there’s a lot the show “gets right,” as Melngailis acknowledged in a blog posted after the show’s release, she wasn’t so keen on others, the ending is one example.

So, seeing as Netflix isn’t giving up on this trend of true crime habit and giving us our fix of drama, despite the predicament some outlets have pointed out, we will have to wait and see what else is in store for the streaming platform. Who knows, maybe we’ll finally get a ten-parter on John McAfee—you know, the computer software mogul-turned-medicine-kingpin with a payroll of gangsters, fugitive and possible murderer? There’s a lot of people Netflix should investigate.

Anyway, at least Leon (​​Melngailis’ dog) is alive and well, unscathed by the events of the scams, maybe he might be immortal after all. 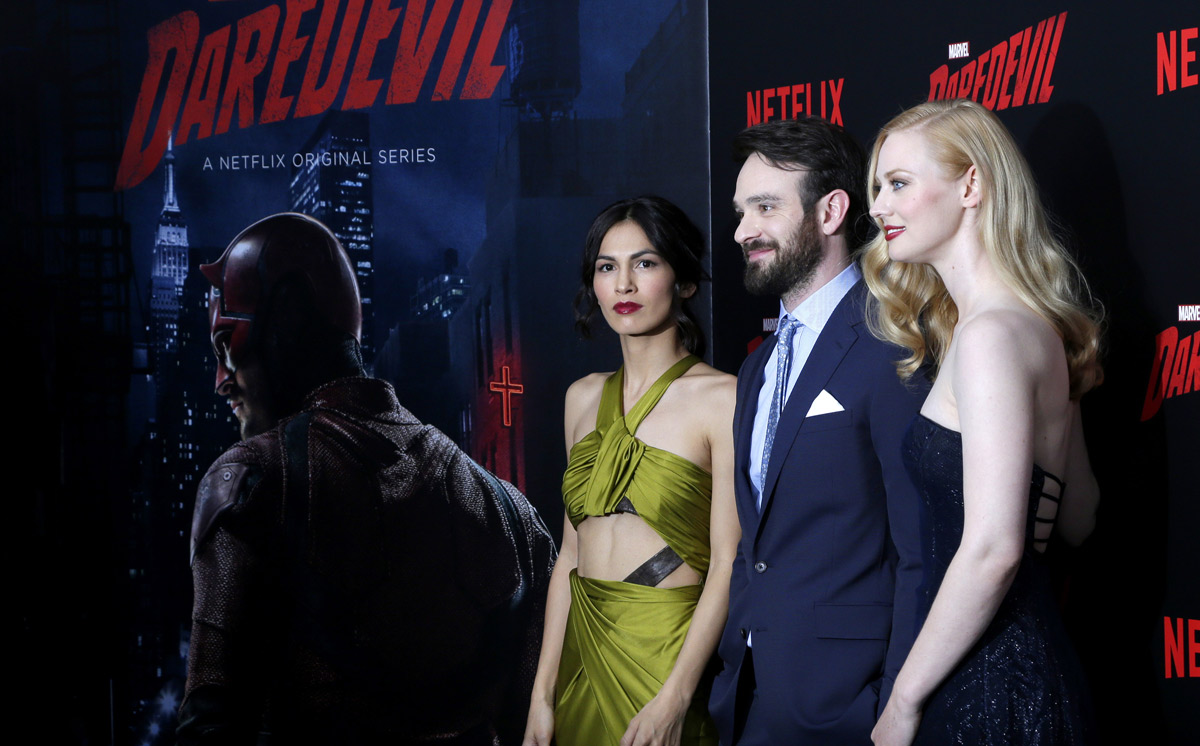 With the advent of the cancelled Good Girls—a show about three suburban women diving into the world of crime, drug lords and money laundering—making its way back into Netflix’s top 10 this week, we thought it’d be interesting to look back at some of the other series whose threads were cut way too soon.

According to Forbes, the anomaly that is Good Girls just keeps giving. Dubbing it “one of the most bizarre situations in television,” the article goes on to say that the show was axed after its fourth season before it even had the chance to conclude properly. Its finale episode aired in July of 2021, ending its short three-year presence on our screens. Without the sweet release of true catharsis, we were left without a rhyme or reason as to why it ended.

Clearly, the show was (and still is) crazy popular—so low viewer ratings is not it—with Forbes noting that the show still managed to edge its way into the streaming platform’s elusive number 2 spot on its US top 10 list. Though there’s been a lot of speculation as to why the show was cut, such as show leads Christina Hendricks’ (who plays Beth Boland) and Manny Montana’s (the internet’s heartthrob, Rio) rocky relationship—not to mention the supposed issue with Montana’s contract as well as the season five pay cuts. I won’t get too much into that though as we’re here to focus on the TV shows and only the TV shows.

So grab your shovels, folks—it’s time to enter Netflix’s cancelled-show graveyard and dig around for some gems.

Of course, I had to put Good Girls up in the top spot. How could you not want a finished ending to women who become so “fed up with playing by the rules and not getting the respect they deserve, they band together to take control of their lives by holding up a local grocery store”? It’s the perfect show—crime, comedy and Retta, what more could you want?

Maybe we really should get behind Forbes’ #SaveGoodGirls and bully some sense into the corporation. I mean, it worked for Manifest…

According to Business Insider, Netflix doesn’t really see the value in shows that exceed the 30 episodes mark and that couldn’t be more true in Castlevania’s case. Announced in mid 2021, the series was cancelled on its fourth season. The animated horror show, drawn from the series of video games of the same name, follows Trevor Belmont and Co. as they navigate a world of dark mediaeval fantasy filled with complicated vampiric hierarchy and the expansive world of witchcraft. The gothic horror action series definitely had a few more seasons of anarchic blood-shedding to offer its audience.

TVLine listed Grand Army on its roster for shows that shouldn’t have gotten away. Alongside American Vandal, The Society and On My Block, this one truly hurt as a zillenial who still lives for a bit of coming-of-age drama.

In 2021, rumours about the show’s success and its renewal greenlight for a second season began circulating, yet sadly, #blackAF was cancelled by the platform after, you guessed it, only one season. The black family mockumentary just didn’t do it for the streaming service. Deadline hinted that there’s still hope though, as there are talks that plans for the show in the idea mill include a movie franchise. Win, win, win, win, win, indeed, Kenya Barris.

Netflix’s dream to jump into the Marvel universe started off so well with Daredevil. Shortlist noted the structural plan for the Marvel universe shows—“each character getting their own show and an Avengers-like coming together in The Defenders”—was kind of genius. Unfortunately, it didn’t pan out for Daredevil, despite its three seasons being a success, which still pains me to this day.

One man’s trash is another mouse’s treasure it seems since, according to The Manual, the show is confirmed to return to the Marvel Cinematic Universe (MCU), only this time on Disney+, as stated by Marvel President Kevin Feige. Too bad Netflix didn’t see the series’ full value. But hey, at least we get that anticipated fourth season.

One of the many forgotten Netflix wonders you will find is The OA, and for good reason too. The show’s trailers remain unforgettable to this day though its two-season run has since faded into obscurity.

This one makes me so mad that I can’t even talk about it only having one season when a show beginning with ‘R’ and ending in ‘Dale’ still exists. Yeah, that’s still going strong, by the way… I think I need a minute, honestly. I’d still watch the entire season of The Get Down all over again anyway.

Need I really say anything for this one?

Remember that Insider article with showrunner Jonathan Entwistle? Only one season of beautifully dark comedy? Count your days, Netflix.

Though it’s not a Netflix show, my honourable shoutout must go to Hulu’s High Fidelity starring Zoë Kravitz. Despite her being on bigger, better and more bat-ish things like 2022’s The Batman by Matt Reeves, I do lie awake at night wondering if she’ll ever reprise her role as Rob.