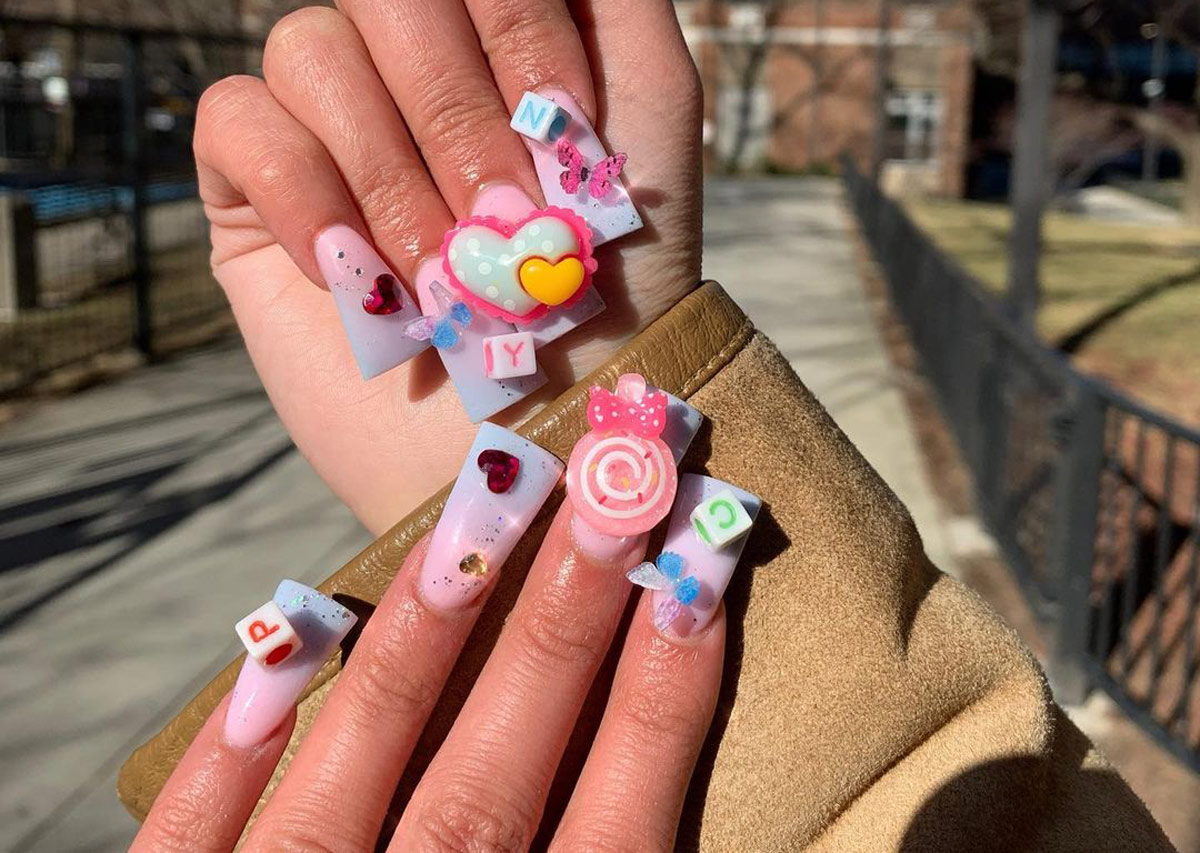 Duck nails have got the internet quack-ing. Here’s how you can nail the ‘cursed’ trend

Fashion’s illicit relationship with ‘ugly’ trends kicked off when Paris-based luxury brand Céline debuted an iconic line of fur-lined Birkenstocks. Currently helmed by Cruggs, a hybrid between a pair of Crocs and UGGs, the concept seems to have seeped into the beauty industry—influencing everything from our lips to our fingertips. Re-introducing duck nails, an ‘eye-bleachy’ yet disruptive nail trend that’s guaranteed to make you go “what are those” before ordering a UV lamp off Amazon to try yourself.

What are duck nails?

Also known as fan tips, flared nails and Jersey nails, duck nails refer to a nail shape that resembles a duck’s webbed foot. They are thin at the beginning and flare out past your nail plate unlike the traditional coffin and stiletto shapes that narrow into a sharp peak toward the end. Their resemblance is also equated to that of a fan or a pair of flared jeans in this regard.

Revived back into mainstream attention with the resurgence of Y2K, duck nails hail Nicole “Snooki” Polizzi as their fairy godmother. Snooki, a cast member of the MTV reality show Jersey Shore, flashed what was then termed ‘duckbill nails’ on the 2011 MTV Video Music Awards red carpet. Although her fan tips were decked in alternating rhinestones with black-and-white stripes to floor audiences, several petitions aimed to police duckbill nails and stop them from gathering traction as a full-blown trend in the future.

Ten years, 80,000 views on #jerseynails and 15.8 million on #ducknails later, the nail shape is evidently not one of those things that were left back on Jersey Shore.

Cementing onto its 2021 renaissance are both nail artists and celebrities alike. A quick scroll through the embellished TikTok feed of Nails Dani is more than enough to label duck nails as the official nail trend of the year. Although the comments section features some of the most dubious users on the platform, some of her videos have raked in as much as 1.6 million views to date.

“A lot of people don’t understand these nails, but I think the point is to shake the norm,” said Casie Wendel, a Los Angeles-based photographer and stylist, in an interview with Good Morning America. “They’re supposed to be extra and hilarious, that’s what makes them maximalistic and iconic.” Nail enthusiast Yazmin also recalled her aunts pulling off the trend when she was in elementary school. “I also want to recognise the Black and Latina community for inspiring these and I will keep wearing them regardless if people like them or not, because the shape and creativity is phenomenal,” she added.

Then came Bhad Bhabie with her iconic french manicure rendition of the trend. Viewed more than 11 million times on TikTok, the mini-ASMR tutorial inspired many including Mackenzie who credited the rapper for introducing her to the quirky trend.

How can I DIY duck nails at home?

Be it out of genuine interest or mere curiosity, if you’ve fallen for duck nails and the nearby nail salons aren’t open for business yet, we’ve got you covered. Here’s how you can nail the trend and have a ducking good time doing so.

Duck nails are a six-ingredient recipe. First off, you’ll require a pack of pre-formed artificial flared nails that retail for around $10 on Amazon. These artificial forms are essential to nail the look. You can also choose to sculpt the entire form from scratch but who are we kidding, fellow newbies? A UV lamp, preferred nail polish, clear UV nail gel and nail brushes are also among the list. Embellishments are up next—depending on the complexity of the design you want to try out.

2. Create the artificial base

It’s time to get quacking. Start by gluing on the artificial nails to your natural nail plates. If they’re too long, feel free to snip them to your liking with a pair of scissors. You also have the option of flaring them out even more by adding and shaping some acrylic to the corners with a brush. Make sure the base is firm and nice with no risks of peeling off before proceeding to the next step.

Next up is applying the nail polish of your choice. Depending on your design, apply an even coat and cure it under a UV lamp to speed things up. Once that’s done and dusted, it’s time to embellish your baby. From Snooki-inspired rhinestones to kidcore charms and Hello Kitty stickers, the possibilities are endless. Glue them according to your design and proceed.

4. Seal and cure with a clear gel

After the embellishments are in the mix, it’s time to seal them off before heading out the door. Cover your work with a clear UV nail gel and cure under the lamp once again. A clear acrylic gel can also be dabbed on with a thin nail brush to give your nails a natural curve. Remember to file this layer down before sealing with a clear gel.

There you have it. Picture-perfect duck nails that are guaranteed to stand out miles away in a socially-distanced party. And if you’re ever worried about taking your rings off or flipping tortillas in them, Nails Dani has got you covered with a visual manifesto to back up the entire trend. Rinse and repeat, fellow ducklings! 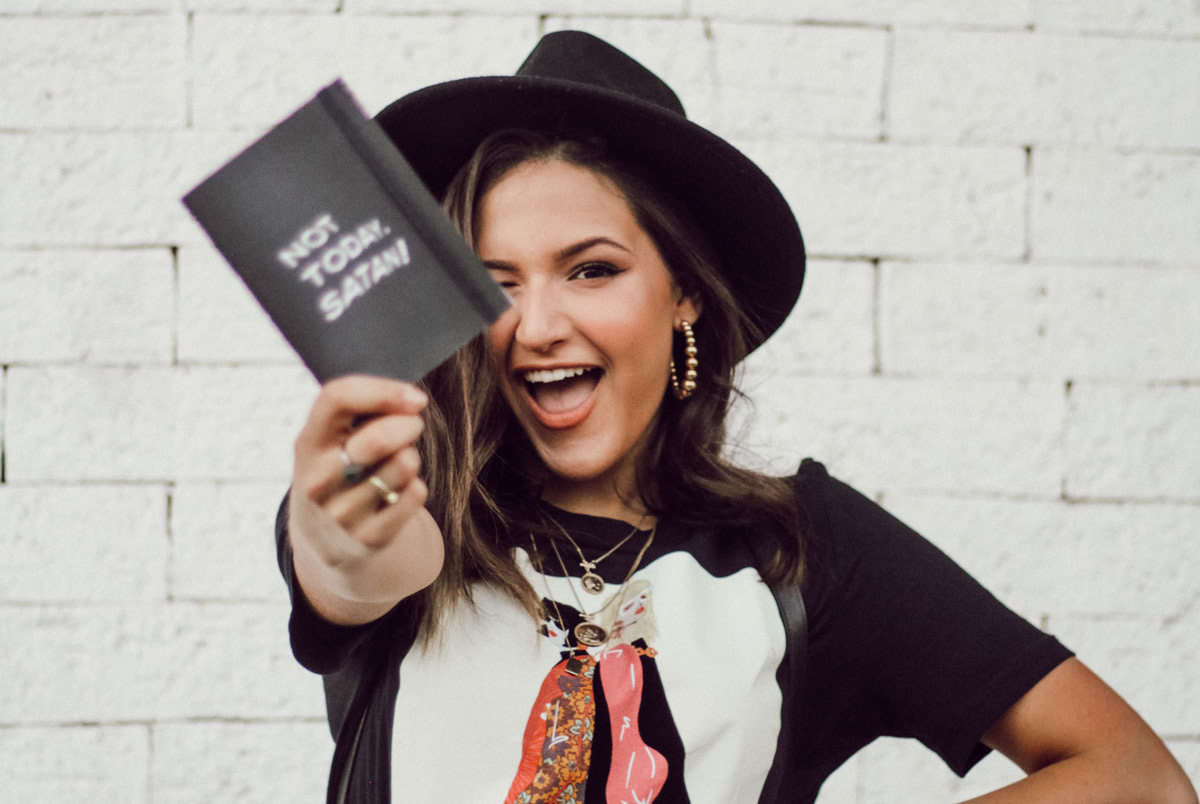 Forget about being basic, cheugy is the new TikTok adjective used for anything off-trend

A while ago, I wrote an article in which I revealed how, during my teenage years, I had gone through a regrettable basic bitch phase. In it, I explained what the term basic bitch encompasses exactly and as I did just that, I felt like the ‘my job here is done’ meme. Surely, the new generations would realise the immense potential that the adjective ‘basic’ represents, right? Wrong. There’s a new word on the block, and boy is it better than ‘basic’!

What does cheugy mean?

Urban Dictionary defines it as “the opposite of trendy. Stylish in middle school and high school but no longer in style. Used when someone still follows these out-of-date trends. This may include but not be limited to fashion, habits on social media, usage of slang, etc.”

According to The New York Times, 23-year-old software developer Gabby Rasson created the term. Unable to find a word for people or objects that were just a bit out of touch with current trends, she made up her own as a high school student.

Although it’s recently gained popularity on TikTok after copywriter Hallie Cain (also known as @webkinzwhore143 on the video-sharing app) posted a video on 30 March explaining what the word means, cheugy has actually been circulating online since at least 2018, when the Instagram account @cheuglife posted its first public post.

But what does it mean? Well, the term is deliberately vague—that’s what makes it so perfect. “Cheuginess is subjective and open to interpretation,” wrote Insider, and I couldn’t agree more. In her TikTok, Cain refers to another video where a user is asking for a word to describe “the type of people who get married at 20 years old.” In that same video, Cain described this type of person as a millennial with “girlboss energy.”

In a way, that whole paragraph above may seem very unclear to older generations. But if you’re aged 30 or below and still don’t get the ‘vibe’ I’m talking about, then have you checked for grey hairs? Because you’re definitely getting old.

Cheugy can be used, broadly, to describe someone who is off-trend or trying too hard. And while a lot of cheugy things are associated with white millennial women (for understandable reasons), the term can be applied to anyone of any gender and any age—so don’t go thinking you’re out of the woods just yet.

But the term is not only used to describe people. UGG slippers, #girlboss mugs, cake pops, Gucci belts with the large double ‘G’ logo and chevron are among the many other things deemed cheugy. Looking back on all the awful trends we’ve seen going in and out of style, the real question you should be asking is what isn’t cheugy?

And according to Rasson when she spoke to The New York Times, “thrifting, making your own clothes, handmade products, Levi’s jeans, Birkenstocks, home decor not found at Target,” are definitely not cheugy. “Looking good for yourself and not caring what other people think, that confidence exudes non-cheugyness,” added Rasson. That being said, there’s absolutely no way to confirm whether these exact same things won’t be ‘cheugy AF’ in a few years. After all, girlboss culture felt empowering not so long ago, am I right?

No need to freak out about being cheugy

As cool and unique as we like to think of ourselves, we all follow trends at some point in our lives, and as a result, we definitely all have our cheugy tendencies. While the term in itself sounds like a misogynistic attack on millennial white women, it’s important to try and look at it from another perspective.

Cheugy can be used more as a tool for self-deprecation, a way to poke fun at your past self who actually did love UGG boots and aspired to be a girlboss. “We all have a little cheug in us,” Cain said in a follow-up to her original TikTok video, and there’s nothing wrong with embracing it.

“We need to accept the fact that we’re bound to be predictable and mainstream sometimes,” I wrote to conclude my basic bitch confession article, and I can’t think of anything better to finish this one with than some good old fashioned self-affirmation. A little cheugyness never hurt nobody #cheuglife.