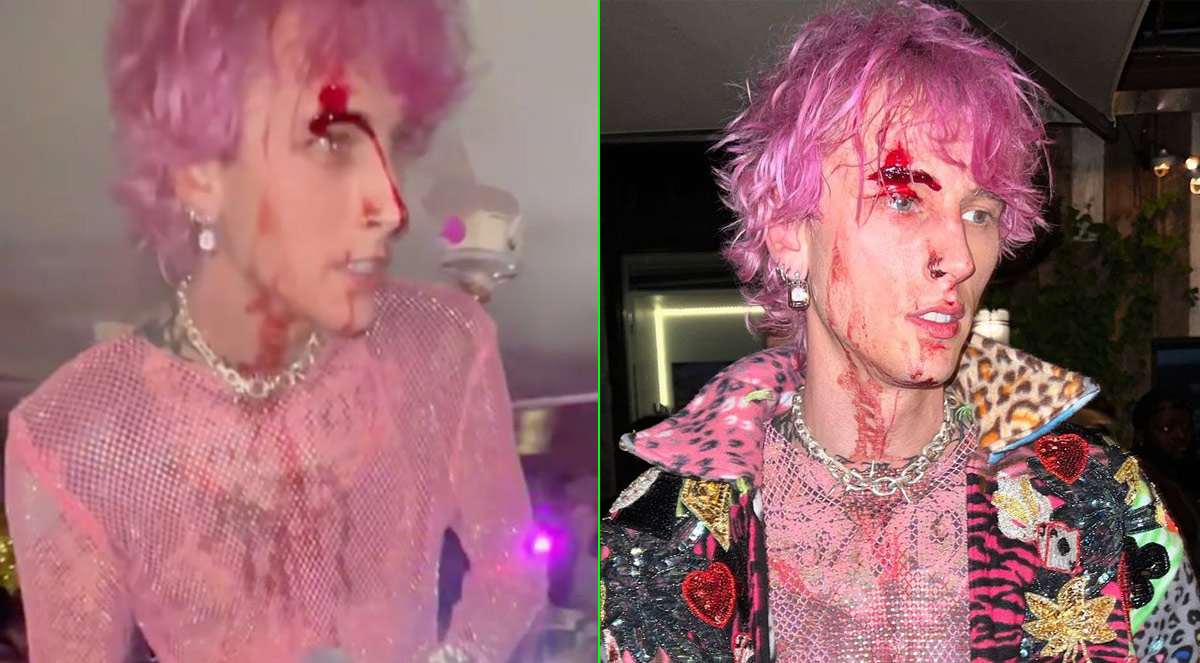 In April 2022, emo couple Machine Gun Kelly (MGK) and Megan Fox admitted that they drink each other’s blood for “ritual purposes.” The American rapper has also flaunted the actress’ blood around his neck and was once even spotted wearing a blood-filled syringe as an earring. Just when we thought Fox had manifested a vampire for a boyfriend, it seems like MGK has taken his obsession with bodily fluids to the next level.

On Tuesday 28 June, MGK headed to Catch Steakhouse in New York with his celebrity friends after performing at a sold-out concert in Madison Square Garden. At Catch, he decided to treat patrons with yet another mini-concert on the restaurant’s outdoor terrace. And that’s when things took a bloody turn.

While performing ‘my ex’s best friend’, MGK shouted “I don’t give a fuck, bro. I don’t give a shit” before whacking a champagne flute on his forehead, prompting shards of glass to go flying as the crowd screamed in horror. What’s more is that he even shared footage of the eyebrow-raising moment on his Instagram Stories the next morning, captioning the video, “and this is when things turned…” with a crying-laughing emoji.

In a series of clips which followed, the rapper was seen continuing with his performance—unfazed by the blood dripping along his nose, neck and sheer pink top. “Fuck it,” he captioned the Instagram Story, where he was seen bleeding profusely from his forehead as members of the crowd passed him tissues.

Later that night, MGK was spotted leaving the restaurant in high spirits despite having blood caked on his face and pink top. He was seen holding hands with Fox, who was also at the party—though she covered her face with her sleeve and clearly wasn’t too thrilled about photos being taken.

While an eyewitness told Page Six that MGK was provided with bandages when he started bleeding, which the artist “declined” as he continued his “impromptu performance” without wiping the blood away, a TikTok video by user @kittylever went viral on the platform—which captured fiancée Fox’s reaction to the entire incident.

In it, Fox was seen holding her hand over her mouth and pulling a bleeding MGK back when he shouted, “Let’s fucking have some fun tonight” as the crowd cheered on. “She was so stressedddd. He literally cracked his head open with a champagne glass on purpose it was crazy,” @kittylever captioned the video.

The comment section under the clip, however, was anything but convinced. “Why did I think she smelled his blood and ascended,” a user wrote, while another added, “She was like ‘not my dessert going to waste’.” Meanwhile, others compared the scene to The Twilight Saga by noting, “Gave me Edward Cullen vibes when Bella walked in front of the fan.”

On the down low, however, some fans also expressed their concern for the couple. “Idk she prolly is just really worried about him, but he is spiralling so fast she can’t keep up,” a user admitted, referencing the recent revelation that MGK put a loaded gun in his mouth and attempted suicide while on the phone with Fox.

The rapper went on to add that he would always sleep with a shotgun next to his bed and “just fucking snapped” that particular day. “I called Megan. I was like, ‘You aren’t here for me.’ I’m in my room and I’m, like, freaking out on her. Dude, I put the shotgun in my mouth,” he continued. “And I’m yelling on the phone and like the barrel’s in my mouth. And I go to cock the shotgun and the bullet, as it comes back up, the shell just gets jammed. Megan’s like dead silent.”