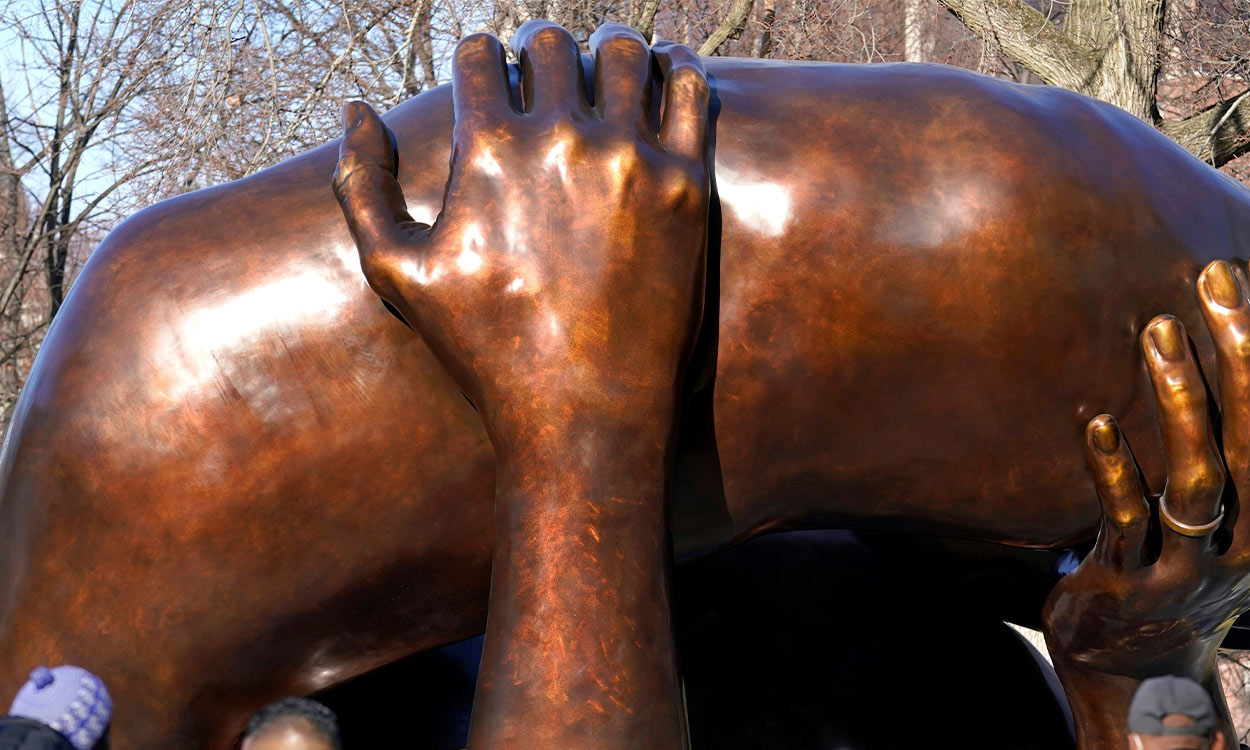 In what might go down in history as the most bizarre physical homage ever constructed, a newly built $10 million statue celebrating Martin Luther King Jr (MLK Jr), one of the most prominent leaders in the civil rights movement from 1955 until his assassination in 1968, has been harshly criticised and condemned online due to its explicit nature.

According to The Independent, the 22-foot bronze statue, which was unveiled in Boston last week, is supposed to depict a photograph of the activist and his wife Coretta Scott King—a civil rights leader in her own right—embracing after MLK Jr learned he had won the 1964 Nobel Peace Prize.

Titled ‘The Embrace’, the tribute was designed by artist Hank Willis Thomas who wished to create a monument celebrating MLK Jr and his legacy of love, nonviolence and solidarity. The 19-ton artwork was made up of about 609 pieces welded together in Washington by the Walla Walla Foundry and then transported to Boston. It’s now a permanent fixture in Boston Common public park, sitting on the 1965 Freedom Plaza, which honours 69 local civil rights leaders from the 1950s to the 1970s, as reported by The New York Times.

The unveiling coincided directly with Martin Luther King Jr Day—an annual national holiday in the US where citizens mark the birthday of the deceased civil rights leader and pay tribute to his historic legacy.

While the intention behind the statue was to all intents and purposes well-mannered and respectful, its public showcase was met with fraught disapproval. Shortly after images were posted online, social media users—particularly on Twitter—began to erupt, labelling the artwork “obscene” and “pornographic,” while also alluding that the statue resembled part of a male anatomy.

One user crudely—yet not unjustified—wrote: “Spending this #MLKDay2023 laughing for a third straight day that woke liberals have honoured Martin Luther King Jr. with a statue of a giant flaccid penis.” Another individual simply put: “This is a disgrace to Martin Luther King Jr ’s memory.”

Not only was there outrage from unknown netizens, Seneca Scott—cousin of MLK Jr’s wife—published a scathing article in the American magazine Compact, clearly expressing her disgust with the nature of the statue. Scott wrote: “Ten million dollars were wasted to create a masturbatory metal homage to my legendary family members—one of the all-time greatest American families… How could anyone fail to see that this was a major dick move (pun intended) that brings very few, if any, tangible benefits to struggling black families?”

Virtue signalling is an extremely significant issue that often takes advantage of and manipulates communities of colour—often for the sole purpose of benefiting white individuals who already hold the majority of power and influence. It’s been a highly saturated political strategy among both US politicians and corporate entities.

Virtue signalling, also closely associated with performative allyship, has been prevalent within the growing Black Lives Matter (BLM) movement. As reported by Vice, #BlackoutTuesday—a widespread  social media movement to show solidarity against police violence and the killing of George Floyd—quickly garnered criticism from activists and organisers due to the fact that actively taking part, spreading awareness and participating in the movement directly is far more valuable than simply joining in with an online ‘trend’.

If we’re talking about bizarre physical tributes, it’d be wrong not to mention the most confusing statue to come out of 2022. Only three months ago, a group of highly loyal and fanatic admirers debuted a gigantic monument celebrating Twitter disruptor and tech titan Elon Musk. The statue displayed a goat with the head of their hero Musk riding a rocket—seemingly, they considered this particular depiction to be highly complimentary.

Either way, it’s clear that the recent MLK Jr statue has touched a nerve, and rightly so. Honouring such a significant and important cultural leader is highly beneficial, however, it’s only a positive act if it’s conducted in the right way. 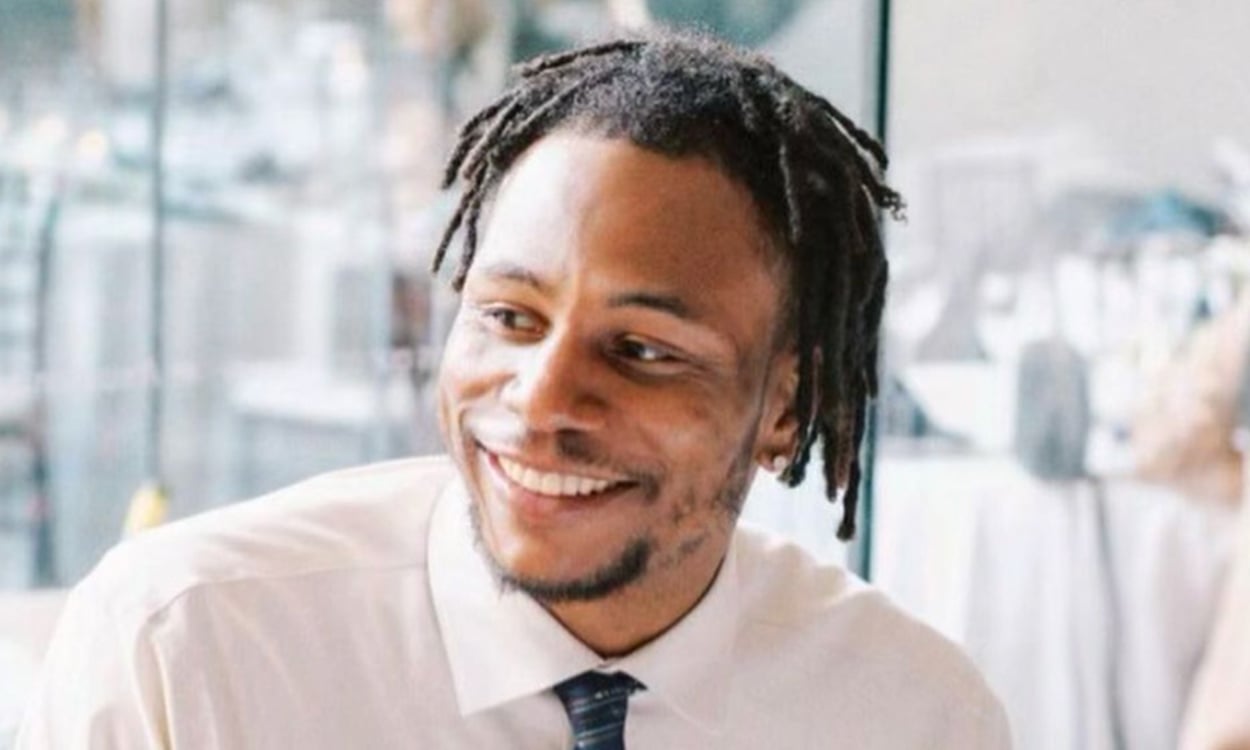 According to the BBC, the 31-year-old high school teacher and father died in a hospital in Santa Monica after going into cardiac arrest. The police who tasered Anderson had initially been called to the scene in regard to an ongoing traffic accident in the Venice neighbourhood of Los Angeles.

Police chief Michel Moore told a news conference on 11 January that Anderson had committed a felony hit-and-run in a traffic collision. He continued to state that the victim had attempted to flee the scene by trying to “get into another person’s car without their permission.”

The LAPD have only now released body camera footage of the day in question. In it, you can see Anderson in visible distress, fearful of the officers as they try to detain him. Shortly after, you can hear Anderson shout: “They’re trying to George Floyd me!”

This cry for help is clearly in reference to the horrific murder of Floyd—a black man who was killed in 2020 after white police officer Derek Chauvin aggressively restrained him by the neck for almost nine minutes. The death of Floyd subsequently ignited a global movement—spearheaded by the BLM organisation—aimed at addressing and combating police brutality and violence against black individuals.

In the case of Anderson, it’s been established by numerous news outlets that a stun gun was used on him for approximately 35 seconds altogether. Footage clearly shows officers holding Anderson down as they repeatedly taser him—all this culminating in the 31-year-old being transported to a nearby hospital where he died only four hours later.

A recent New York Times (NYT) investigation analysed the use of tasers in the line of duty. According to the publication, at least 500 people in the US have died by stun gun use since 2001. Moreover, a 2008 review of hundreds of deaths involving taser use by Amnesty International—featured in the NYT article—revealed that 90 per cent of those who’d died had been unarmed.

It should also be noted that official police executive research clearly states that when using a stun gun against an assailant, total exposure should not exceed 15 seconds. Anderson was tasered for 35 seconds.

BLM co-founder Cullors told The Guardian: “My cousin was asking for help, and he didn’t receive it. He was killed. Nobody deserves to die in fear, panicking and scared for their life. My cousin was scared for his life. He spent the last ten years witnessing a movement challenging the killing of black people. He knew what was at stake and he was trying to protect himself. Nobody was willing to protect him.”

The footage adds to mounting pressure on the LAPD, whose encounters with black and brown men have resulted in three deaths in under a week. Takar Smith, 45, and Oscar Sanchez, 35, were both shot dead by officers at the start of January 2023.

Cullors also went on to note how both herself and Anderson had moved to Los Angeles in hopes of escaping the rife racism they’d faced living in Louisiana. They’d sought out a “western haven” and this death makes it unbearably evident that even those US states considered proponents of inclusivity and equality are still overwhelmingly lethal.