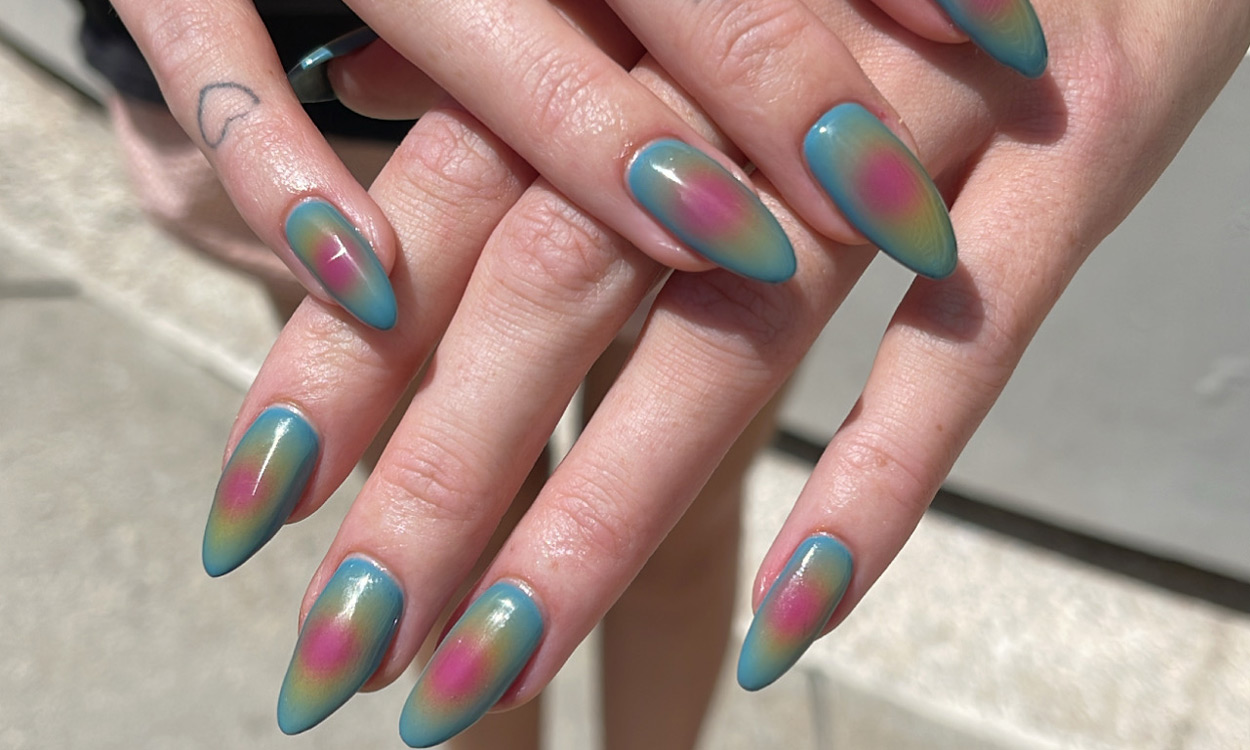 Meet aura nails, the manicure trend all about channelling good vibes on your fingertips

In an era of red, pink, beige, and green flags, conversations surrounding one’s personal energy are more relevant than ever before. While ‘good vibes only!’ is just a phrase to some, for others, it’s an entire life mantra based on the energy they radiate. And this is exactly where the concept of an ‘aura’ makes its magical debut.

To date, people have aligned their wardrobes and home decor with the aura they emit. The summer of 2022, however, is all about channelling them right onto your fingertips. Meet aura nails, the manicure trend that is increasingly gripping and dipping Instagram’s Explore and TikTok’s For You Pages into airbrushed colours that resonate with one’s soul.

But before we dive deeper into the trend, let’s breeze through some of the basic concepts when it comes to analysing one’s personal aura.

What exactly is an aura and how do you see it?

Often used interchangeably with ‘vibes’, an aura is an electromagnetic field that all human beings radiate. It’s believed to be a luminous body that surrounds your physical one—with each layer, and any problems within them, engulfing your frame in a net of energy with their responding colours. These hues and shades shift in response to your emotions, mental patterns, physical energy, and a variety of other factors to represent your current state of being.

Now, there are a few ways in which you can ‘see’ your aura. The most common practice is to get your aura photographed. Also known as Kirlian photography, this practice is believed to capture one’s electrical emanations as an egg-shaped circle around their physical body. However, if you don’t have access to special equipment, don’t worry just yet. Another way to sense your aura is by softening and slightly squinting your eyes while looking at yourself in a mirror.

While this may take some practice, several experts believe the best way to spot your energy is with your peripheral vision. Simply put, if you focus on your aura too much in the mirror, chances are that you won’t be able to see it. But if you look away, you may notice colours or light slowly arise from around your body.

Wait, what does the colour of my aura even mean?

Let’s say you’ve successfully managed to capture your aura and you’ve just witnessed a bunch of colours magically pop up around you. Now what? Well, for starters, know that each layer of your aura is said to be represented by a different colour. Some also believe that the way these colours vary and interact with each other illustrates how emotionally, spiritually, and physically complex you are.

For example, some layers may appear brighter if you’re more vibrant or emit greater energy, while others may be dull if you’re mentally stressed or physically ill. It’s worth noting that your aura is also bound to change over time, so the colours you see today may not always be the same.

That being said, here’s a mini guide on various aura hues and what they mean:

What are aura nails?

Now let’s enter the gorgeously-faded arena in question. Aura nails, as a manicure trend, are all about vibing with energy fields. Just like no two auras are the same, each aura manicure is customised to the wearer—majorly featuring a gradient look with most of the colour typically deposited in the centre of each nail.

“The first time I saw them was about a year ago,” said TJ, nail artist and founder of Bicolor—a studio based in Beverly Hills. “I don’t remember the exact post, but I remember not knowing what it was.” At the time, TJ was amazed by the style but didn’t know how to nail the same until the summer of 2022—when he got his own airbrush gun and became obsessed with the tool. “The first set I did was an airbrushed white on a dark blue background on myself, and I loved it!” he added.

As for Kirsten Chanel, the artist behind California-based Nails by Kirsten Chanel, her initiation into the trend was somewhere between February and March 2022. “An aura manicure can be achieved through the use of blooming gel or the airbrush tool,” she explained, adding how the style has majorly spiked due to nail artists discovering airbrushing techniques, including herself.

TJ also echoed the same belief by stating that the tool has revolutionised the aura manicure altogether. “In order to achieve the look, you use a handheld airbrush machine and airbrush gel, and then a regular gel top coat,” he mentioned.

When SCREENSHOT reached out to Antajah, a licensed nail artist based in San Diego, they claimed that aura manicure is now the biggest trend of the year, similar to 2021’s obsession with blooming gel nail sets.

“You start off with a gel colour for your base and cure it with a UV lamp for 60 seconds,” Antajah explained when asked about the process backing the style. “To create the ‘aura’ part, you will need an airbrush machine—they can be found on Amazon if you’re looking for budget-friendly [options]. Insert the second colour of their liking, and only airbrush the centre of the nail so you can still see the base colour you started off with.”

The artist also went on to offer a tip from their personal experience: “If you add in a third colour [that is] similar or brighter to the second [one], it’ll give more depth and life into your set.”

As celebrities like Megan Fox continue to jump on the trend with powdery-purple bases and orange gradients, it makes one wonder if they should compulsorily get their aura readings done before heading to their nail tech.

Well, the best part about aura nails is that they don’t have to be accurate. “Clients will bring in reference pictures from other inspired sets or they just come with colours that appeal to them,” Antajah admitted. “Sometimes, they let me decide the colours for them—they just want the creations to pop!” So don’t stress yourself out if you can’t capture and analyse your own aura. You can simply refer to an aura colour chart, pick the hues and shades that represent how you feel—or how you want to feel—and don’t be afraid to experiment with bold colours.

While the natural, airbrushed vibe of aura nails is stunning in itself, they can also be used as a base for more intricate manicures. “Some decals and designs I think will look good with aura nails would be pearls, metal studs, gold crosses or maybe chrome accents,” Chanel said.

TJ, on the other hand, highly recommends stencils. “If you have a good stencil set, the options are endless,” he explained, adding how aura manicure is pretty much the same trend that gripped the aughts which is making a comeback now. “They work with anything: rhinestones, hand-painted nail art or whatever you want!”

Matte finish, polka dots, French and duck tips, and sky-inspired manis are also in the bottomless mix. You can additionally play around with the placement of the auras and even implement mixed auras by combining both cool and warm tones to truly pop your creations.

Lastly, I asked all three experts about what they would call aura nails if they could rename the entire trend. While Chanel went with ‘ombré orbs’, TJ highlighted how he would address them as ‘bicolor’—a fitting reference to his own studio.

As for Antajah, the artist said: “I wouldn’t change the name of this set at all, I think it’s perfect for this specific design just because people seek aura colours to see what kind of person they are from within. So them picking what colour of aura nails they want says a little something about them too—I love that concept!”

At the end of the day, remember that aura nails are all about embracing your uninhibited energy and channelling immaculate vibes while you’re at it.