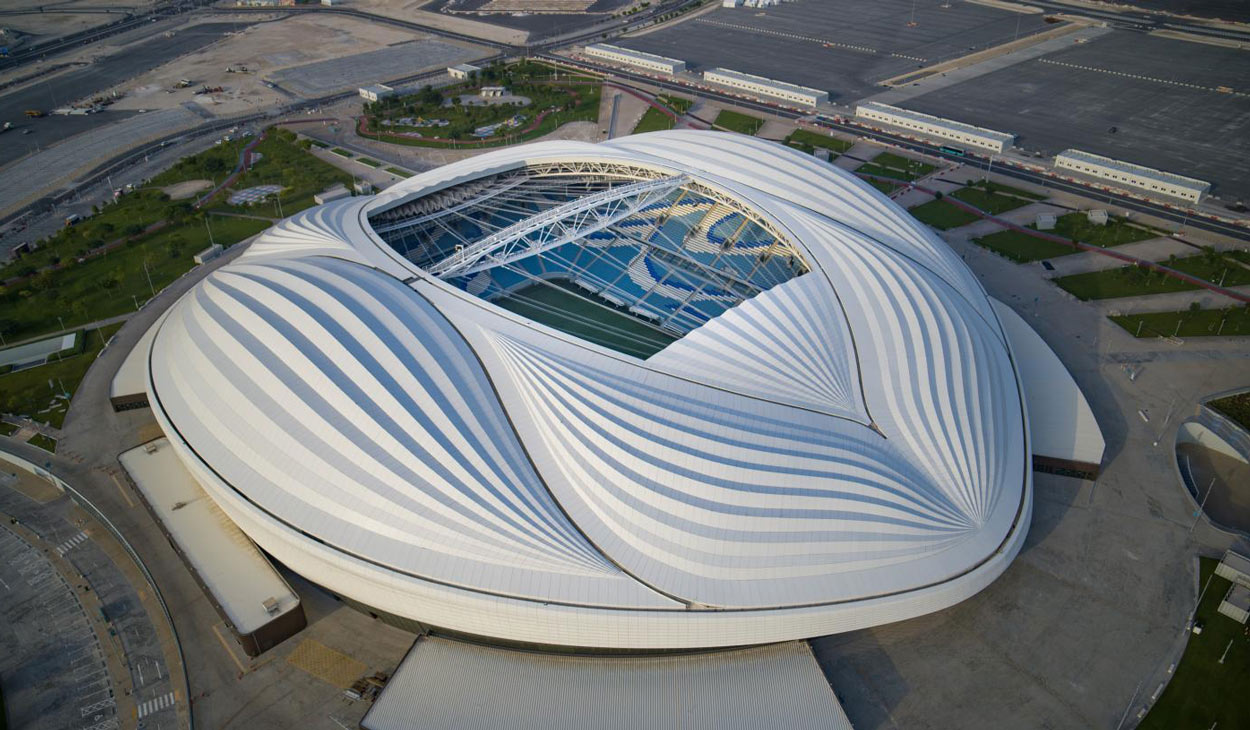 Are Qatar’s space-age World Cup stadiums the future of sports and climate change?

In 2010, Qatar won the right to host the 2022 instalment of one of sport’s greatest spectacles: the FIFA World Cup—a tournament that unites millions of fans across the world every four years. Sketching plans for eight outdoor stadiums in and around its capital city Doha, it was only in 2015 that the country acknowledged scorching temperatures that could be both miserable and dangerous for attendees and players alike.

Considering Doha’s standing as one of the world’s hottest cities, FIFA moved the competition from its traditional summer dates to late fall. Then came 52-year-old Saud Ghani, a mechanical engineer at Qatar University on a mission to alter the future of stadium design and sports in an increasingly warming world.

Mechanics and fate of the World Cup stadiums

Although Qatar reportedly had a 12-stadium plan when it won hosting rights for the 2022 World Cup, it was cut down to eight after three years into the preparation process. Of these eight stadiums, seven were built from scratch, while the Khalifa International Stadium was renovated before the country hosted the 2019 World Track and Field Championships.

But in a city which basically hums with the sound of air-conditioning, is it possible to design an outdoor stadium that keeps people cool? More specifically, is there a way to achieve this minus the cost it may have on the environment and economy? For Ghani, the innovative solution hinged on using giant water tanks to create a space-age cooling system.

The concept is pretty straightforward: warm air rises, cool air falls. “Ghani did not need to cool the entire volume of the stadium—just the six feet or so above the ground where athletes played and in the sloping stands where people sat,” The New York Times reported. “Apply cool air down low, he figured, straight to the field (for the players) or to each row of seats (for the fans). In theory, the cool air should sit right there, like a comforting blanket.”

Given the need to limit the variables that might puncture the cool layer in question, each stadium was hence designed with a permanent white canopy to shield most spectators from sunlight. The canopies also left ring-shaped or field-shaped holes to the sky in a bid to let hot air escape and enter.

“For Ghani, chilling a stadium would be like trying to keep the inside of his Porsche cool while driving around Doha with the sunroof open—if his car held nearly 90,000 people,” The New York Times continued. In each stadium, thousands of gallons of cold water (housed in giant tanks hidden out of public view) are deployed to cool the air instead of an artificial coolant.

In an interview with the publication, Ghani explained that, on the nights before games (more efficient than during the heat of the day), water in the tank is cooled to 5 degrees Celsius, with this energy reportedly coming from a solar farm outside Doha.

“I have only two pumps,” Ghani said. “One takes the chilled water to the stadium, and we have a lot of heat exchangers, like the car radiators, under the bleachers. Air is pulled from the stadium to the radiator with the cold water inside, and then back to the stadium.” Special vents under the seats and bleachers essentially slow or diffuse the rush of air.

“The system has sensors and infrared cameras to make in-game adjustments and steer more cool air into different places,” The New York Times mentioned. “A humid day can feel warmer than a dry one, so the vents are adjusted accordingly.” On 29 November, Manchester United winger Antony claimed that the stadium’s cooling system made him and other members of the Brazil squad ill.

“It was a bit difficult. I ended up having a bad feeling for a few days,” he told ESPN Brazil. “I’m recovering well and getting 100 per cent. It was the air conditioning [in the stadiums]. Not only me, but other players also had a cough and a bad throat.” Meanwhile, some spectators complained about the venues being either too hot or too cold and wondered if two key factors had been overlooked: the sun and fans who chose to stand, in turn, putting themselves further away from the vents under the seats.

When it comes to the post-World Cup fate of the eight stadiums, one is set to be dismantled and others will be used “year-round” by local soccer clubs, and as community spaces to host big events. “Is it smart from a sustainability standpoint to have eight stadiums that you can only use three months of the year?” Ghani asked. “Of course not. So you need air-conditioning to make them viable long-term.”

The financial, environmental, and ethical debate

As the first Middle Eastern country to host a FIFA World Cup, the tournament undoubtedly marks a historic moment for Qatar. But the achievement is also mired in controversy. Apart from the deaths of migrant workers and the country’s stance on LGBTQIA+ rights, critics have claimed that the stadiums’ air-conditioning system comes with both financial and environmental concerns.

For starters, Ghani and World Cup organisers have declined to disclose costs or data on the stadiums or their cooling systems. “Some estimates have the eight stadiums costing a total of $6.5 billion, a price that does not include the human cost in lives lost and chronic health problems for the low-paid migrant workers who built them,” The New York Times noted.

Although FIFA’s analysis claimed that the World Cup would be carbon neutral, more than half of Qatar’s electrical output allegedly goes towards air-conditioning. Critics have also doubted the governing body’s statements by citing everything from new construction in the past decade to the thousands of flights taken in and out of Qatar during the tournament.

To Ghani, however, there are bigger debates to have about air-conditioning’s present status on Earth—along with what cooling the air means for greenhouse gases, electric grids, and other major events that rely on outdoor stadiums as the planet continues to get warmer. According to the engineer, all of these are factors we need to think about if we want such games to be played, comfortably and safely, in the time and places we desire. 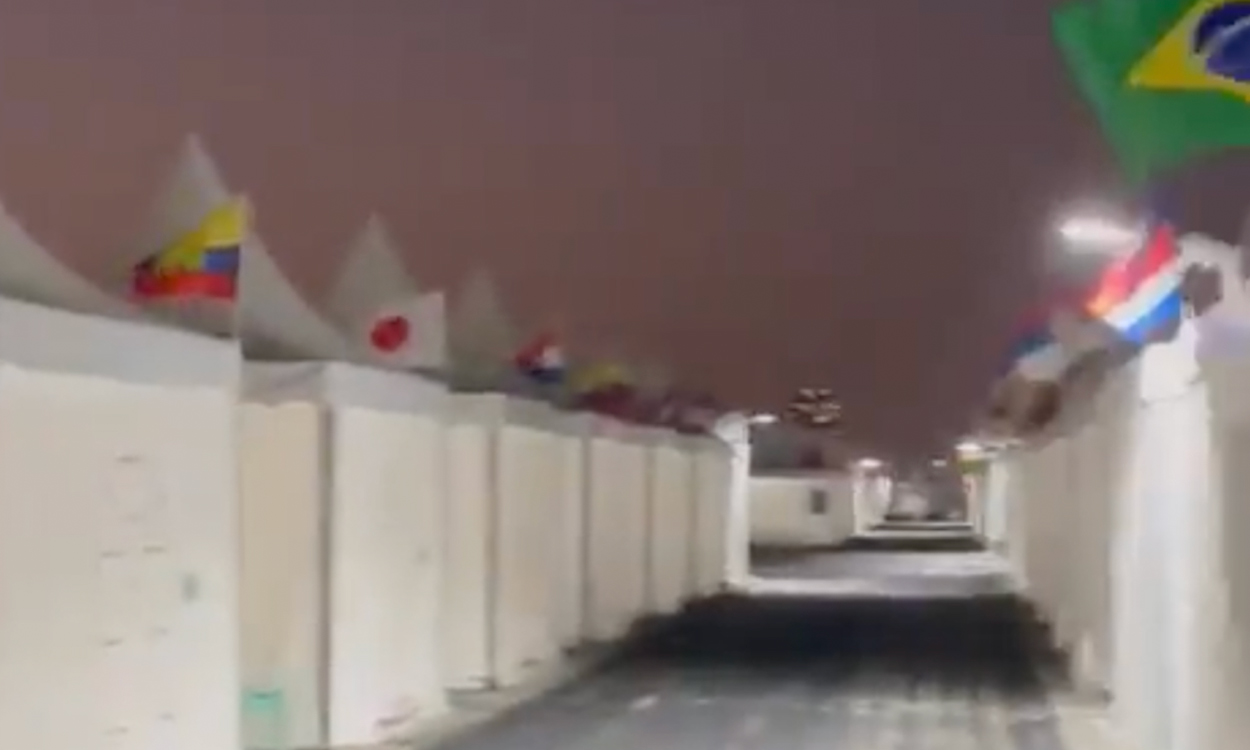