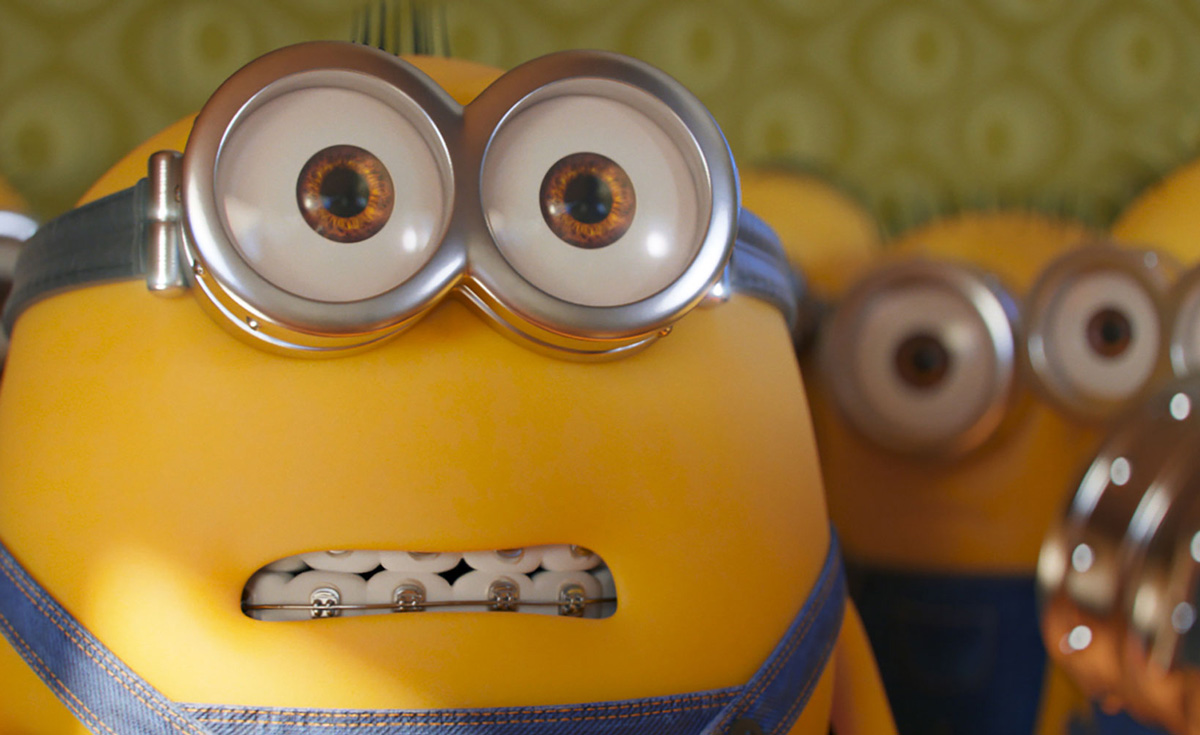 Gen Zers all across the globe are suiting up in their finest attire to watch a criminal mastermind and his army of sassy jelly beans in their local theatres. Assembling a batch of friends, they are seen donning dress shirts, ties and blazers, pulling up to cinema halls armed with truckloads of bananas, heading to their seats in an orderly fashion with their hands set in a conspiratory pose, engaging in formal ovation—and in worst-case scenarios, starting riots, mosh pits, fire hazards, food fights, disruptive cheering (depends on who you ask) and damaging the movie screen permanently—only to be escorted out of the hall by staff and even police at times.

Coming to a theatre near you, if they haven’t already, are Gentleminions: members of a mostly-harmless—again, depends on who you ask—subculture birthed by the legendary memeification of Minions: The Rise of Gru. Hitting cinemas on 1 July 2022, the fifth instalment of the Despicable Me franchise went bananas at the box office by raking in an estimated $125 million over the Fourth of July holiday weekend alone—overtaking Transformers: Dark of the Moon, which only made $115 million in the same period back in 2011. This week, it is also set to compete with Marvel and Taika Waititi’s Thor: Love and Thunder.

As Gentleminions and minioncore continue to hook the broader internet, a certain mass media conglomerate can be spotted cowering in a corner with its painfully-mediocre superhero film. Yes, I’m talking about Sony Pictures and its living vampire baby Morbius. Minions is everything Morbius wished to be. The latter was supposed to have a hot girl summer and not a feral girl bummer of a time in theatres when it released for the second time to cash in on what the studio thought was a golden opportunity.

Before I give too much away and run out of substances to back my arguments, here are three lessons Morbius can learn from the memeified success of Minions and the Gentleminions trend across social media platforms.

This one’s a no-brainer although Sony still embarrassingly failed to grasp its concept. For starters, memes about Minions: The Rise of Gru started circulating in online forums seven months before the film hit theatres—just like how the Barbie movie starring Margot Robbie and Ryan Gosling is already trending on the internet when it’s only set to release in 2023.

For Minions, its footing in meme culture was sparked in the ‘Tickets To X, Please’ format which initially originated on 4chan. The series of memes under this phrasal format essentially mocks the stereotypical audience for a given movie. So when news of the new Despicable Me spinoff hit the public, they quickly scrambled to edit images of Walter White and Jesse Pinkman from Breaking Bad, the internet’s ultra-masculine archetypes like sigma males and GigaChad and the men from the No Russian mission in Call of Duty: Modern Warfare 2 asking for tickets to watch Minions, which is perceived to be a movie meant for kids. Here are some other notable examples for visual reference:

Following the ‘Tickets To X, Please’ format was a song called ‘Rich Minion’ by Portland-based rapper Yeat, who is also credited with the viral TikTok audio ‘Sorry Bout That’. On 16 June 2022, Cole Bennett, head of rap label Lyrical Lemonade, took to Twitter and teased netizens by stating: “I’m doing a trailer for the Minions movie and I convinced them to let me use yeat for the soundtrack.” The tweet quickly went viral on the platform and when the official Twitter account of Minions replied with an ‘eyes’ emoji, people started believing the far-fetched narrative.

Although the song was set to drop on 29 June, just two days before the release of Minions: The Rise of Gru, both Yeat and Lyrical Lemonade leaked a snippet featuring its primary lyric which goes: “I got money.” The 15-second clip later evolved into the official anthem of the Gentleminions trend which followed suit.

But before this viral trend gripped all social media platforms alike, notably gathering 51.3 million views to date on TikTok, there was another phenomenon which was initiated alongside the premature anticipation for the movie in question. In May 2022, TikToker @hutchbucketz started urging his followers to join the ‘Minion Cult’ or ‘Moonians’ by changing their profile pictures (pfps) to one featuring the creator in a Minion costume—holding what looked like the moon. “I’m starting a minion cult. Make this your pfp to join. WE ARE THE MOONIANS,” the video read. As of today, it’s safe to say that even American YouTuber MrBeast is a member of the online cult.

Back to the “rowdy” Gentleminions trend, there are several theories as to why suites and ties have become the weapon of choice among members. While some trace it back to supervillain Gru’s signature all-black outfit, others associate the preference with sigma males and GigaChads. According to Australian high school student Bill Hirst and his friends, who first popularised the trend on TikTok, the formal drip is also about “making an ironic, humorous display of gentlemen or adults going to a movie.” Simply put, it is the obvious visual manifestation of the ‘Tickets To X, Please’ meme format.

Starring Jared Leto and aptly released on 1 April 2022, Morbius gripped meme culture only from its opening night when Twitter user @ericszyszka uploaded a picture of an empty preview screening and joked, “Morbius fever has gripped the nation.” A horde of memes—apologies, parody memes (a mix up which happens to the best of us, right Sony?)—followed. The first pit stop for the internet was Rotten Tomatoes, Google and Metacritic, where people started leaving troll reviews—sarcastically hyping the film’s quality and expressing amazement at cameos that didn’t happen.

“I almost passed away when it was revealed that Shrek is the main villain because he was angry that everyone was invading his swamp,” another admitted. “My absolute favourite part of this film was when the Dracula from hotel Transylvania showed up and helped Morbius defeat Shrek.” It’s also worth noting that Morbius has a 16 per cent critics rating and a 71 per cent audience score on Rotten Tomatoes. And that’s saying something.

Then came the internet’s obsession with Morbius Sweep, a term given to the series of parody memes ironically celebrating the film’s massive commercial success—despite it crashing and burning across theatres worldwide. Now, Morbius did earn a respectable gross during its opening weekend, but sales dropped a staggering 74 per cent afterwards. Although fake revenue statistics and Photoshopped critic reviews were thrown around, it still didn’t get people to watch the ironically-hyped film.

This was quickly followed by the fictional catchphrase “It’s Morbin’ Time,” which was essentially a play on the Power Rangers’ iconic dialogue “It’s Morphin’ Time.” Since its inception, the phrase continued influencing gen Z’s vocabulary online, until Leto himself made the grave mistake of acknowledging it—thereby killing the meme with a single tweet.

All of this to say that Morbius ultimately became internet-famous by virtue of being a soulless and “scriptless” movie that nobody could even be peer pressured into watching. But this didn’t stop Sony from inexplicably mistaking ‘laughing at you’ memes for ‘laughing with us’ audience demand and re-leasing Morbius across 1,037 theatres in the first weekend of June—only for it to flop again and bomb the domestic box office for the second time.

The very fact that Sony was tricked by its online fandom to believe that the interest and backlash could translate into tickets only went on to confirm one thing: Morbius Sweep memes had come full circle. It’s okay, Sony. I bet everyone would love a TV show about the living vampire instead. So how about making us one with a humongous budget?

2. Market outside of meme culture

When I had a chat with several users on Discord and asked them for their opinion on the success of Minions and the failure of Morbius in tapping the same segment of internet culture, most of them had similar claims: the former is a movie simply worth watching while the latter is anything but. Frankly, I believe this entire article can be summed up by these facts too. Unlike its ancestors, Morbius relies too much on its shared Spider-Man universe rather than fleshing out its own mythology.

But a point to be noted here is that none of these users have actually watched Morbius—not that their claims are going to change much even if they do. “I was actually discouraged by the memes, even though I used to say ‘It’s Morbin’ time’ and ‘Morb’ in real-life conversations everyday until around June,” one shared. When asked about the reception to the movie’s re-release, they added, “[I] still didn’t feel like watching it, [I] just made more memes and shared them on channels.”

Minions, on the other hand, is rooted in nostalgia for all users alike. Despicable Me first came out in 2010, a time when most gen Zers watched the movie in theatres with their parents in tow. The Gentleminions trend aims to tap into this same nostalgia and ultimately resonate with others.

However, nostalgia is not the only booster behind Minions: The Rise of Gru—given how Disney’s Lightyear failed to tap the same audience when it was released back on 17 June 2022 despite featuring Buzz Lightyear, one of the most memorable animated characters ever brought to the big screen.

In the case of Minions, the franchise has also established a far better foothold in meme culture over the years as a bonus. Who could forget the time when our Facebook timelines were swamped with unhinged posts featuring Kevin, Stuart and Bob with all their slapstick stupidity? In fact, the memes were so random back then that they don’t even make sense when you look at them now. Here are some instances I stumbled across on a Telegram channel dedicated to Minion memes:

Over the years, Jared Leto, who plays Dr. Michael Morbius himself, has made a name for himself in the music industry with his band Thirty Seconds To Mars. He’s also credited with a surprisingly long-lasting acting career—starring in Fight Club, House of Gucci, Requiem for a Dream and Suicide Squad—all despite the fact that he has a history of predatory behaviour for which he has never faced the repercussions to date.

From turning his band into a cult to both the industry and fans accusing him of sexual assault and paedophilia, SCREENSHOT had previously gathered all the receipts of Leto’s problematic past.

During an interview with Uproxx, Morbius’ director Daniel Espinosa confirmed a rumour that Leto was so committed to inhabiting Dr. Morbius that he even pretended to be disabled on the set by forcing himself to use crutches to limp to the bathroom between takes. Heck, things even got to the point where the actor’s long trips began slowing down production, so much that he had to be convinced to allow himself to use a wheelchair instead.

Given the lack of necessary background checks on both actors and the attention Morbius has been gathering online, here’s to hoping that Sony finally learns its lesson and doesn’t succumb to the trending demands of re-releasing the vampire superhero movie for the third time around. Or do, because who knows, maybe third Morb’s the charm? The internet will have a great time nevertheless.